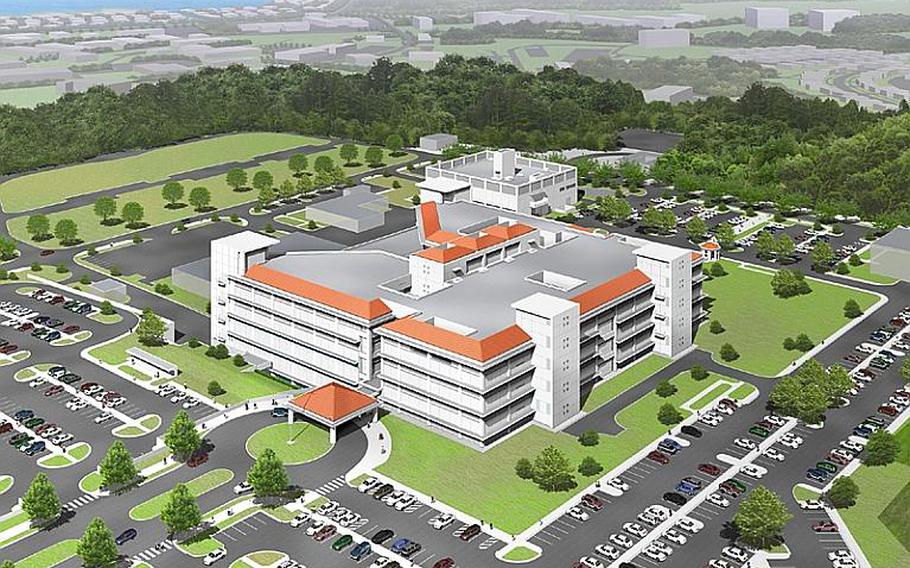 The new U.S. Naval Hospital Okinawa is scheduled to be completed by early 2012 on Camp Foster. It has 100,000 more square feet of space than the exisiting Camp Lester hospital, which will be razed prior to the base being returned to local landowners. (Courtesy U.S. Marine Corps)

The new U.S. Naval Hospital Okinawa is scheduled to be completed by early 2012 on Camp Foster. It has 100,000 more square feet of space than the exisiting Camp Lester hospital, which will be razed prior to the base being returned to local landowners. (Courtesy U.S. Marine Corps) 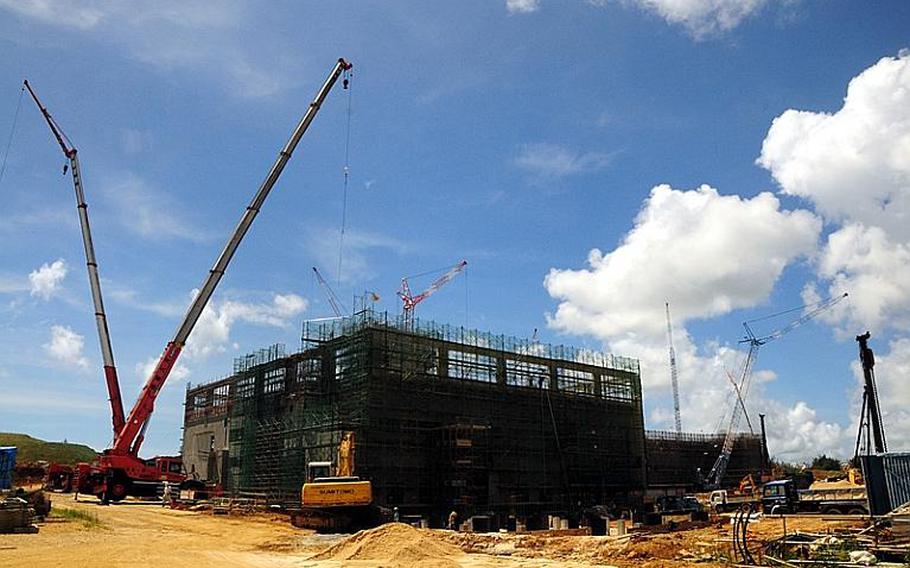 Construction continues on a utility building that will serve the new Navy hospital being constructed on Camp Foster. The new hospital is schedule to be open for business in early 2012. (Matt Orr/Stars and Stripes) 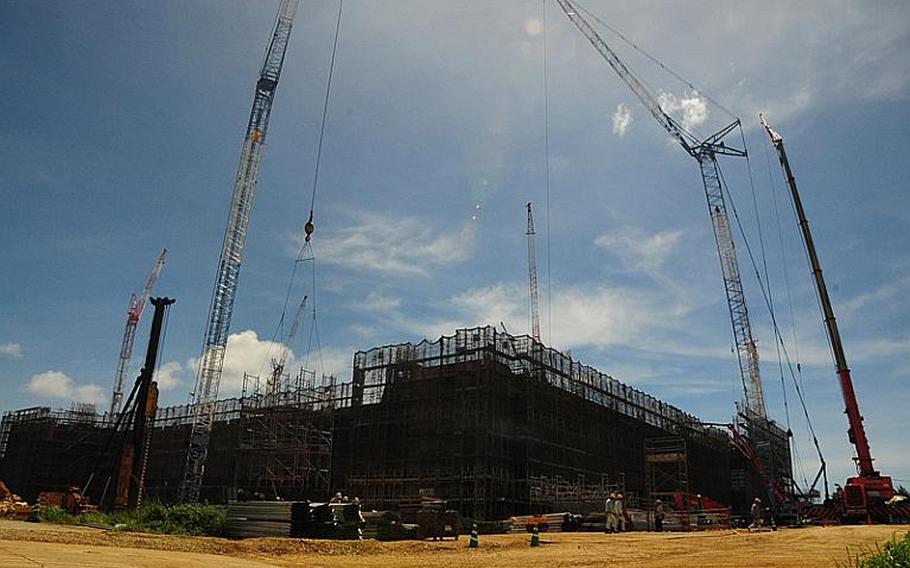 Huge cranes mark the skyline at the construction site of the new Navy hopsital on Camp Foster, Okinawa. The 443,000 square-foot building will be five stories tall and will replace the existing hospital on Camp Lester. (Matt Orr/Stars and Stripes)

CAMP FOSTER, Okinawa &mdash; The dozen cranes towering over this Marine base in central Okinawa is a sign construction is well under way for the new U.S. Naval Hospital Okinawa.

Scheduled to be finished in 2012, the first phase of the project &mdash; the main hospital and utility buildings &mdash; are already making their mark on the skyline. Other buildings &mdash; barracks, recreation center, hazardous waste facility, blood bank and a helipad &mdash; will follow soon.

The new hospital will be approximately 443,000 square feet, consisting of a basement and five floors and built to earthquake-safe standards.

Building a new hospital for the U.S. military community on Okinawa has been in the works since 1996, when the U.S. and Japan agreed to return about 21 percent of U.S. base property on the island. Located on Camp Lester, the current hospital is scheduled to be razed and the base closed.

In August 2003, about 95 acres on Camp Lester were returned to Japan. Once the hospital moves, the remaining 150 acres will follow.

&ldquo;This is a joint project between the United States and Japan,&rdquo; Marine spokesman 1st Lt. Lucas Burkesaid in an e-mail response. &ldquo;It will cost the U.S. Navy approximately $100 million for construction material logistical support, and to outfit the new hospital with equipment and furnishings. The facility itself is being constructed through Government of Japan funding.&rdquo;

&ldquo;Japan has contracted about $161 million for the main hospital building,&rdquo; according to Tetsuo Ooura, a subsection chief for the Okinawa Defense Bureau of Ministry of Defense. &ldquo;How much the total cost will be is not certain at this point because plans for related facilities are yet to be finalized,&rdquo; he said.

Ooura said construction of the hospital was delayed because of a cultural asset survey that took longer than expected. It uncovered old wells and ceramic pieces estimated to be about 3,500 years old.

He said plans to construct 56 new housing units at the hospital site to replace housing on Camp Lester are on hold because of a 2006 realignment agreement that will send more than 8,000 Okinawa-based Marines and their families to Guam. If those Marines are moved, new housing might not be needed, he said.

Also, most of the existing vacated housing units in the adjacent Futenma Housing Area located on Foster are earmarked to be razed and the land turned back to Japan, Ooura said.

&ldquo;We&rsquo;re all pretty excited,&rdquo; said hospital spokesman Brian Davis. &ldquo;The main thing is that we will be able to care for warriors and their families in a brand new state of the art facility, The hospital at Camp Lester is over 50 years old.&rdquo;