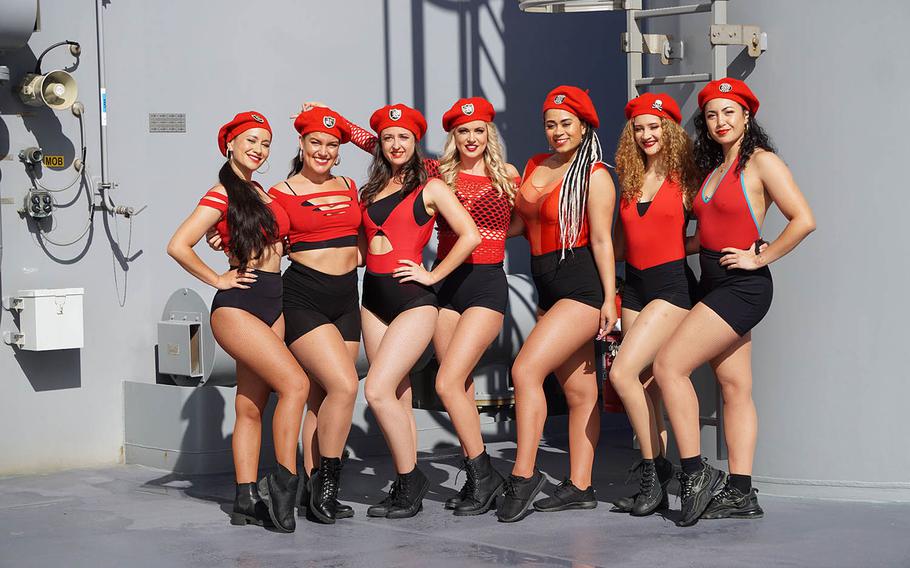 A recent commissioning ceremony in Sydney for the Royal Australian Navy ship HMAS Supply has gained attention, and some backlash, for including a twerking dance crew.

A video posted on several of Australian Broadcasting Corp’s Facebook pages shows the beret-clad 101 Doll Squadron performing in front of uniformed Australian navy personnel on April 10. A pan of the audience shows blank and uncomfortable expressions.

“The dance was performed prior to the commencement of the commissioning formalities,” an Australian Department of Defence spokeswoman, who did not wish to be named, told Stars and Stripes via email on Thursday. “HMAS Supply and the Royal Australian Navy are committed to working with Australians from all backgrounds in actively supporting local charities and community groups.”

The spokeswoman said the dance routine happened before Governor-General David Hurley arrived for the ceremony. On Thursday, ABC posted an apology on its website for video edits that seemingly showed Hurley in the crowd of spectators.

The Royal Australian Navy did not respond Thursday or Friday to queries from Stars and Stripes.

The since-deleted video on ABC Perth’s page had garnered more than 7,000 comments and 1,000 shares as of Thursday afternoon.

The Sydney-based 101 Doll Squadron suspended or made private its social media accounts after the event and have been the target of violent accusations of anti-feminism and disrespect to the military, group director Maya Sheridan told Stars and Stripes via email Friday.

“It was in no way meant to be disrespectful, and we are hurt and disappointed it has been misconstrued to appear that way,” she said. “With indigenous and multi-racial members from a community-based dance group, the dance itself was made up of choreographic and musical elements that included referencing blessings, the waves of the ocean and our geographical location where the fresh water meets the sea, to name a few.”

Commenters on the video noted that the dance routine largely distracted from the main purpose of the event, the launch of a new vessel.

“It is usually a highly respected ceremony, especially given the significance of a new vessel and the cost involved,” Australian resident Dusty Bassinger told Stars and Stripes on Thursday over Facebook Messenger. “I feel embarrassed and disappointed.”

He said he thinks the choice of entertainment also detracts from women’s equality in the forces and a culture of respect for women.

“What sort of message is it sending by including, in a ceremony of this magnitude, a dance routine for the dignitaries that is, by its design, sexually suggestive?” he said.

The HMAS Supply is a new auxiliary oiler replenishment ship. The Supply-class ships will replace retired vessels HMAS Success and HMAS Sirius, according to the Royal Australian Navy’s website.