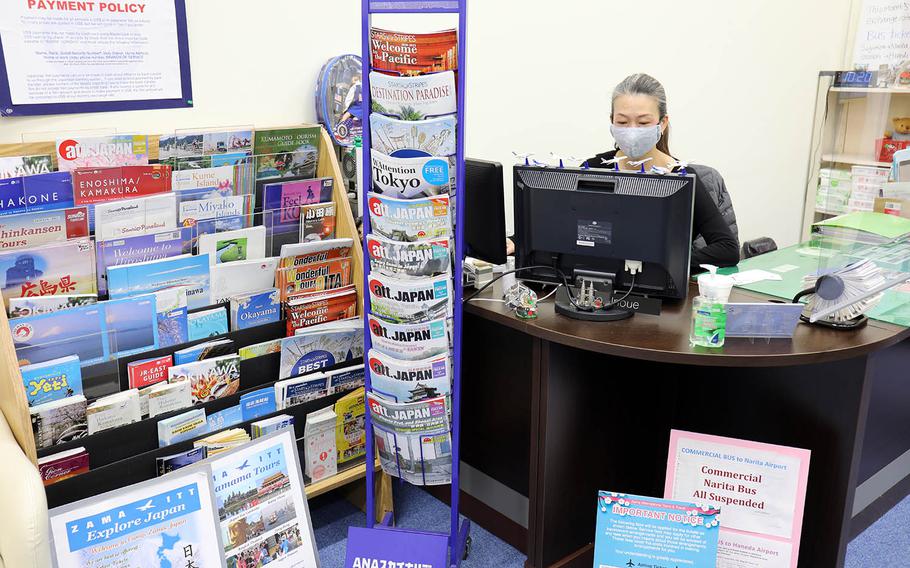 The Information, Ticket and Travel office at Camp Zama, Japan, will close indefintiely on Friday, Jan. 29, 2021, because of the impact the coronaviurs has had on business. (Winifred Brown/U.S. Army )

The Information, Ticket and Travel office at Camp Zama, Japan, will close indefintiely on Friday, Jan. 29, 2021, because of the impact the coronaviurs has had on business. (Winifred Brown/U.S. Army ) TOKYO – The Information, Ticket and Travel office at Camp Zama will close indefinitely on Friday, another casualty of the impact the coronavirus has had on travel and tourism worldwide.

The ITT office at Camp Zama, the headquarters of U.S. Army Japan near Tokyo, provides information and books off-duty travel for service members, base employees and their families.

But with leisure travel outside Japan on hold and trips inside the country often canceled due to changing pandemic conditions, business for ITT all but dried up.

“The ITT office has had almost no business because of COVID-19, with the majority of travel booked through them being for emergency travel,” a U.S. Army Garrison Japan spokesman, Dustin Perry, told Stars and Stripes via email Friday. COVID-19 is the respiratory illness caused by the coronavirus.

ITT operates through a contract with the installation's Directorate of Family and Morale, Welfare and Recreation. ITT, not Zama or the directorate DFMWR, made the decision Jan. 11 to close indefinitely, Perry said.

If the travel situation improves, Tokyo-based Millesimes, a company that manages Zama’s ITT contract, has indicated it may bid on a contract for travel services on the installation, Perry said. He said reopening will “depend on the future situation.”

Zama’s ITT office opened in 1982, and Larry Clements, the liaison officer there, came on board three years later. He’s one of three employees at the office.

Clements turned his own love of exploring into helping others plan their own discoveries, he said. He said the office closing is a disappointment.

“Of course, I’m sad,” he said in a phone call with Stars and Stripes on Friday. “There’s always mixed feelings when things have to change.”

Anyone with travel plans to the areas authorized for Zama personnel must now make their own arrangements. Trips usually sponsored by the base Morale, Welfare and Recreation office are also suspended, according to the Camp Zama website. ITT is a contracted service, while the MWR office is run by the Army.

Zama is not alone in reducing off-duty travel services for its personnel. Each U.S. installation in Japan has its own set of travel restrictions that limit personnel to off-duty travel in a defined area.

Yokota Air Base in western Tokyo permits travel throughout the country, for example, except to central Tokyo and Yokohama. Sasebo Naval Base on Kyushu island, by contrast, has painted most of the country red, or high risk, meaning many activities and leave travel are prohibited.

In January, ITT and MWR offices canceled or postponed trips and tours at Yokota, Kadena Air Base on Okinawa and Misawa Air Base in northern Japan after Japan declared a state of emergency in 11 prefectures, according to the installations’ websites and social media pages. Other prefectures, including Okinawa, have declared local emergencies.

At Yokosuka Naval Base, south of Tokyo, all trips through MWR and ITT have been canceled since March, said base spokesman Randall Baucom. However, those offices are open to provide general information and trip planning, he said.

Yokosuka had some of the highest coronavirus case numbers of all military bases in the Pacific region, with 150 active cases as of Tuesday, according to the base Facebook page. Its permitted travel area encompasses parts of Kanagawa prefecture, where the base is located. The remainder of Japan is off-limits, according to the base public health order.

“Our ITT is not shut down,” said base spokesman Sam Samuelson by phone Tuesday, “but we’re not doing tours, either.”