Summer program offers cadets a look into their futures 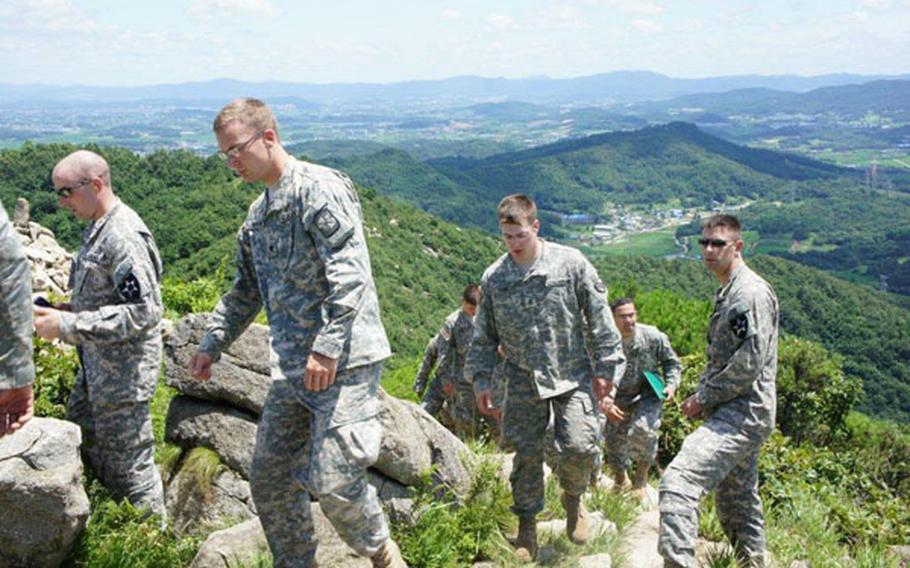 Cadets from ROTC programs at a number of American colleges tour a South Korean mountain on July 19. The cadets are in South Korea as part of a monthlong Cadet Troop Leadership Training program that exposes them to U.S. Army life, and during which they are put in charge of a platoon. (Courtesy of the U.S. Army)

Cadets from ROTC programs at a number of American colleges tour a South Korean mountain on July 19. The cadets are in South Korea as part of a monthlong Cadet Troop Leadership Training program that exposes them to U.S. Army life, and during which they are put in charge of a platoon. (Courtesy of the U.S. Army) 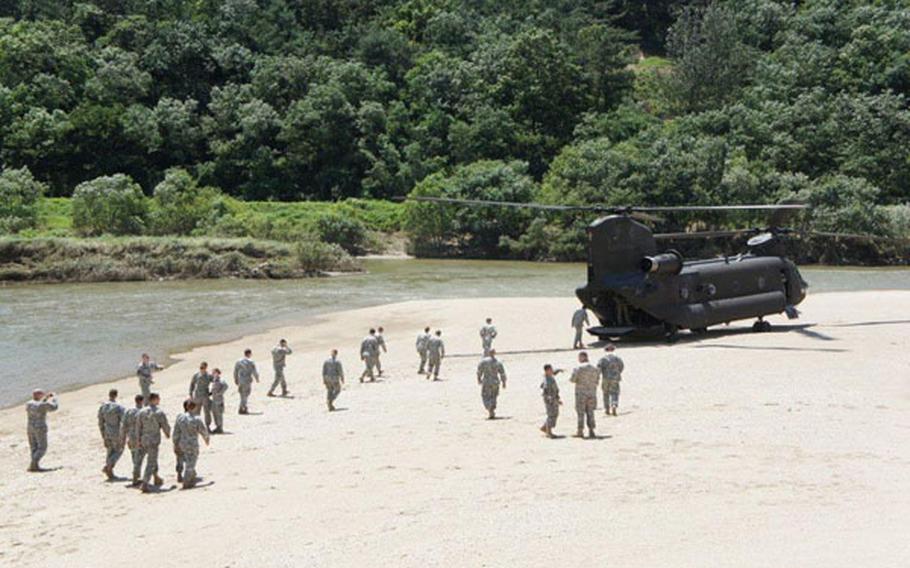 Thirteen cadets tour a beach in South Korea on Tuesday as part of a Cadet Troop Leadership Training program that allows the cadets to attach to U.S. Army units to help them choose what type of field they want to serve in after they finish ROTC. (Courtesy of the U.S. Army)

CAMP RED CLOUD, South Korea &mdash; For career-minded college students, summers are often spent working as interns in their chosen fields of study or otherwise building their resumes in preparation for landing their first real-world job after graduation.

That is why 165 cadets from the U.S. Military Academy and ROTC programs at colleges across America have come to South Korea this summer for several weeks.

They have been given a crash course in military life in a country still technically at war with North Korea, and experience as the leader of a platoon of active-duty soldiers stationed in South Korea.

Brig. Gen. Timothy Edens, assistant division commander for support of the 2nd Infantry Division, said the experience the cadets get in the Cadet Troop Leadership Training program is invaluable.

&ldquo;As good as the ROTC program or the USMA can be, it&rsquo;s just not the same as the Big Green Machine, as they call it,&rdquo; he said. &ldquo;It&rsquo;s exposure &hellip; to the ground level of the Army, where all the lofty plans come together.

&ldquo;They get an early view of what it means to be a second lieutenant in the United States Army&rdquo; in charge of two or three dozen soldiers, he said. &ldquo;There&rsquo;s no joking here. This is serious business.&rdquo;

Edens said the cadets visiting South Korea get something more than those in the CTLT programs in the U.S. and other countries because of &ldquo;the very fact that a very, very &hellip; bad country sits just to the north.&rdquo;

The cadets seem to be well aware of that fact.

&ldquo;It&rsquo;s a lot different from back in the U.S. Obviously, from the military standpoint, they&rsquo;re operating in a lot different environment because they know that something could go down tonight and they&rsquo;ll be fighting,&rdquo; said Adam Alessi, an ROTC cadet from the University of Montana.

&ldquo;So, they&rsquo;re a lot more on their toes (with) their equipment ready to go,&rdquo; he said. &ldquo;These guys are on semi-deployed status at all times.&rdquo;

&ldquo;They&rsquo;re just very dedicated to their jobs,&rdquo; said Temple University cadet Richard Vogt. &ldquo;It&rsquo;s a lot higher intensity than back in the U.S., so you need to be constantly performing to a much higher standard, and they all do that very well.&rdquo;

During a lunch meeting with a group of cadets, Edens said, &ldquo;Don&rsquo;t assume anybody expects you to know everything. But, you are expected to learn and learn quick.&rdquo;

Later, he said he still remembers his time in the CTLT program 30 years ago.

&ldquo;The biggest shock to me, when I first did that, was the level of responsibility I had,&rdquo; Edens said.

A key challenge for cadets is earning the respect of their platoons, given their backgrounds and temporary commands, he said.

&ldquo;You better believe that&rsquo;s what&rsquo;s going on in that formation,&rdquo; he said. &ldquo;But that&rsquo;s the same situation they&rsquo;re going to get coming in as a second lieutenant, and the earlier you understand that (the better). You can&rsquo;t replace that experience.&rdquo;

Alessi said he expects his time leading a platoon to be similar to any situation in which a group finds itself with a new leader.

&ldquo;Ten percent of the people are always going to give their best,&rdquo; he said. &ldquo;The other 90 percent? If you&rsquo;re in that group, yeah you&rsquo;re going to have some resentment and some of the guys are going to pick on you.

&ldquo;But, if you have enough confidence and personal tact, you are going to get along with the guys,&rdquo; he continued. &ldquo;It&rsquo;s nothing really about rank. If you can prove yourself, you&rsquo;ll prove yourself.&rdquo;

Vogt said he will not hesitate to lean on his superiors during his time as platoon leader.

&ldquo;Obviously, we&rsquo;re going to need a little help here and there,&rdquo; he said.

The cadet said that halfway through his CTLT experience, it was clear the program would help set him up for his post-graduation military assignment.