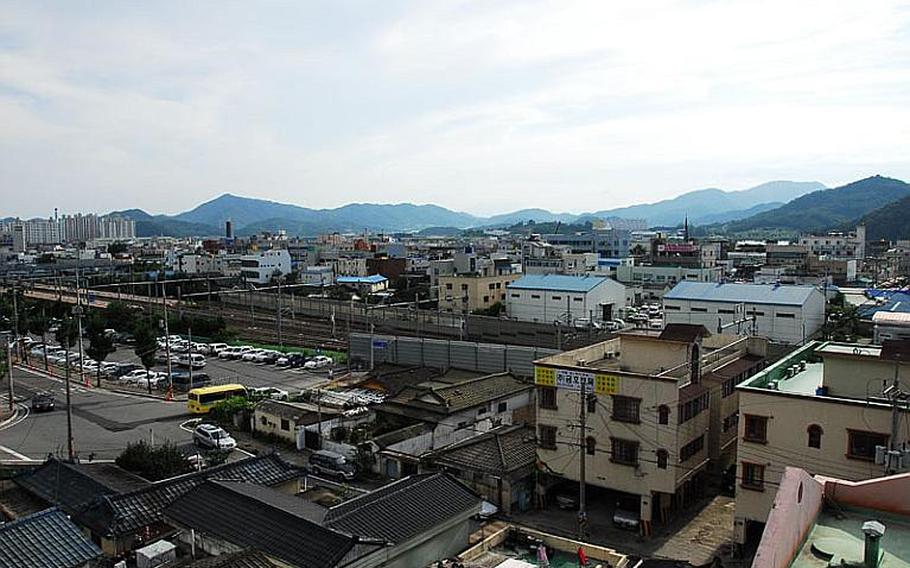 Buy Photo
The South Korean government began a health survey this week that could include as many as 6,500 residents of Waegwan - whose skyline is pictured here - near Camp Carroll. Some U.S. veterans claim they buried Agent Orange at the military base in 1978. Residents and local officials fear the chemicals may have caused illnesses. (Ashley Rowland\Stars and Stripes)

Buy Photo
The South Korean government began a health survey this week that could include as many as 6,500 residents of Waegwan - whose skyline is pictured here - near Camp Carroll. Some U.S. veterans claim they buried Agent Orange at the military base in 1978. Residents and local officials fear the chemicals may have caused illnesses. (Ashley Rowland\Stars and Stripes) 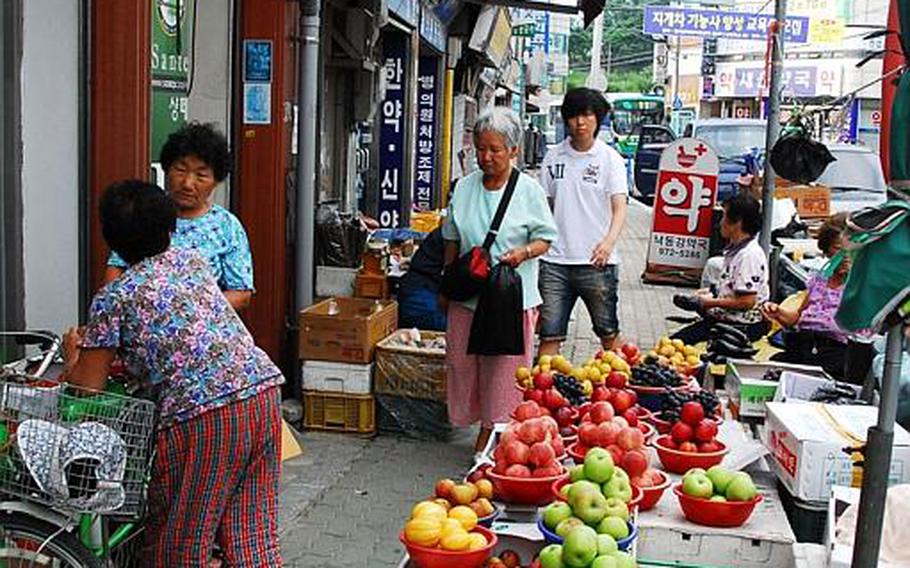 Buy Photo
Women talk in front of a fruit stand on a busy street in the heart of Waegwan in South Korea. Concerns over possible exposure to Agent Orange, has led the South Korean government to conduct a health study on residents living near Camp Carroll. (Ashley Rowland\Stars and Stripes)

SEOUL &mdash; South Korea launched a health investigation this week to determine whether Agent Orange allegedly buried at Camp Carroll more than three decades ago has made residents of nearby villages sick.

&ldquo;We want to ease their minds,&rdquo; an official from the Ministry of Environment said Thursday. &ldquo;That is why we are doing this.&rdquo;

The Ministry, along with the National Institute of Environmental Research, began the investigation on Wednesday following a request on Monday from Chilgok County officials.

Since May, when three U.S. veterans came forward with claims they buried Agent Orange at Camp Carroll in 1978, speculation has abounded that the defoliant may have leaked into the area&rsquo;s water supply or tainted the soil.

So far, the U.S. military and South Korea, which are investigating the allegations, say they have found no evidence of Agent Orange. They have found levels of some pesticides and chemicals through ground and water testing that exceed accepted health standards.

Officials will then collect blood, hair and urine samples from residents with health problems that could be linked to chemical exposure, and if needed conduct more extensive health examinations in local public health centers and university hospitals, according to a Ministry of Environment news release. The ministry official said the entire process could last through June 2012.

He did not know how much the entire investigation would cost, but said the Ministry expects to spend between 200,000 and 250,000 won &ndash; approximately $188 to $235 &ndash; for each detailed health exam.

He said there are currently no plans to investigate whether any deaths in the area may have been caused by exposure to Agent Orange and other toxins, officials said.

The survey team will include approximately 10 health and environmental experts from South Korean universities and the National Institute of Environmental Research. Nursing students and local volunteers will conduct the initial health interviews, said Kim Geun Bae, a NIER senior researcher and team member.

He said officials will look for diseases including leukemia, kidney and esophageal cancer that may be connected to Agent Orange and other chemicals.

8th Army spokesman Lt. Col. Andy Mutter said the military has not been asked to assist or help pay for the investigation.

&ldquo;We are aware of the study, and of course the ROKs are taking the steps they feel are appropriate to address the concerns of their citizens,&rdquo; he said.

A joint U.S.-South Korean investigation team investigating whether Agent Orange was buried at Carroll expects to receive further soil sample results within the next few weeks, Mutter said. Another Ministry of Environment official said further test results could be released to the public in mid-September.