Philippine government gives OK for US to use old bases, newspaper reports 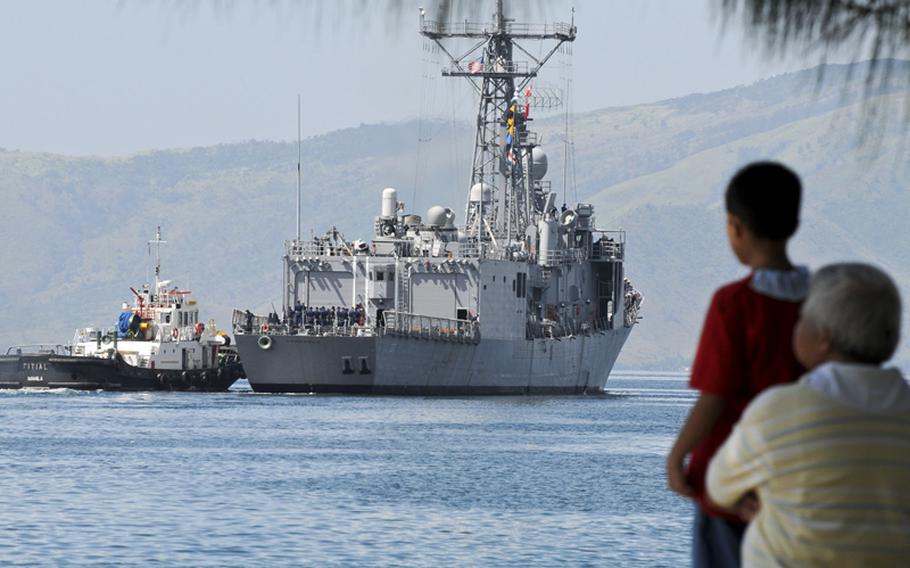 A Filipino father and son watch the guided-missile frigate USS Crommelin get under way after participating in Cooperation Afloat Readiness and Training Philippines (CARAT) exercise in October, 2010. (Thomas Brennan/U.S. Navy)

CAMP FOSTER, Okinawa - The Philippine government said this week that the United States military is again welcome to use Subic Bay and the sprawling Clark Air Base, two decades after the installations were abandoned due to political friction with Manila, according to media reports.

Philippine Defense Undersecretary Honorio Azcueta said U.S. troops, ships and aircraft can make use of the old bases, as long as prior approval is granted by the government. Azcueta made the comments following a meeting with Joint Chiefs Chairman Gen. Martin Dempsey, who traveled to the country as part of a regional trip to generate support for a military pivot toward Asia, according to the Philippine Star newspaper.

The United States had key bases in the Philippines for decades after World War II, but relations broke down in the early 1990s, and the facilities were returned.

The announcement of an expanded military relationship this week comes after months of talks between Washington and Manila, and appears to be another step forward in the U.S. plan to bolster forces in the Asia-Pacific region.

"They can come here provided they have prior coordination from the government," Azcueta said following the meeting at the Philippine military headquarters of Camp Aguinaldo in Manila, according to the Philippine Star newspaper. "That's what we want &hellip; increase in exercises and interoperability."

The United States has a 60-year-old mutual defense treaty with the Philippines and participates in annual exercises with its military. There are also roughly 500 U.S. Special Forces troops that have been advising the Philippine military in its fight against Islamic terrorist groups in the southern portion of the county since 2001.

However, it was unclear Thursday how useful the Clark and Subic bases might now be to the United States because much of the land has been privately developed over the past 20 years.

The former Navy base at Subic Bay still has an airfield that can accommodate military aircraft and also can provide a safe haven for ships during cyclones, according to the Philippine Star.

During that time, the U.S. has struck a deal with Australia to rotate thousands of Marines through bases at Darwin, outlined a plan to forward deploy warships in Singapore, and unveiled a new agreement with Japan to realign the controversial Marine Corps presence on Okinawa.

Dempsey met with Philippine leaders this week as top U.S. officials, including Defense Secretary Leon Panetta, traveled through the region in hopes of building more support among allies for a vastly increased military presence, which will stretch in an arc across the Pacific and Asia from Hawaii to Singapore. Panetta has said the United States plans to shift military forces from a 50/50 split between the Pacific and Atlantic to a 60/40 split that will focus more on the Pacific.

In an interview this week with the Department of Defense press service, Dempsey downplayed the size of the increase in military forces, saying some countries were concerned it could spark confrontation with China.

The Philippines has been embroiled in a heated dispute with China over ownership of the Spratly Islands, a conflict that could draw in the United States due to its mutual defense treaty.