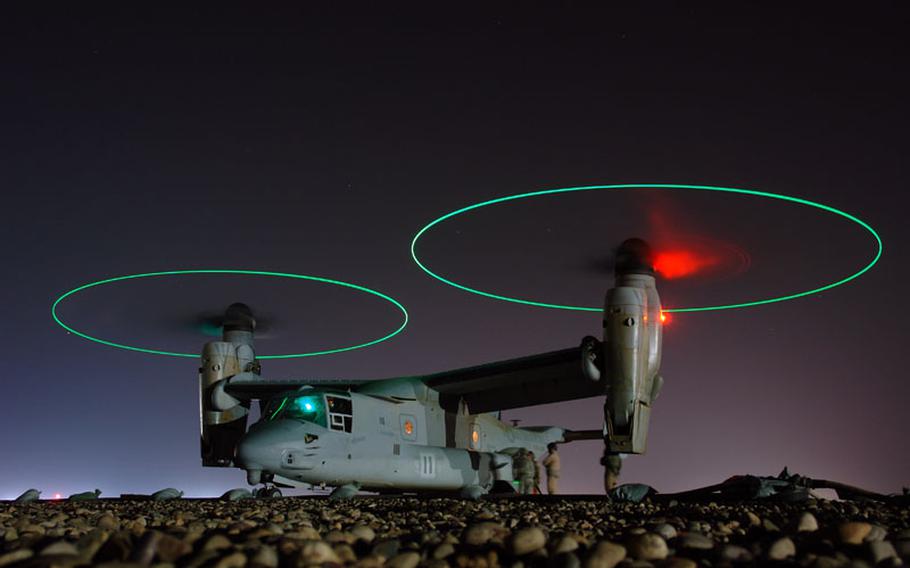 CAMP FOSTER, Okinawa &mdash; The Marine Corps confirmed Thursday that it plans to replace helicopters based at Futenma air station on Okinawa with the Osprey tilt-rotor aircraft, a move that could complicate already tense U.S.-Japan relations involving the island.

The Ospreys could begin arriving at Futenma in 2013 as part of a worldwide effort to upgrade the Marine Corps&rsquo; aging fleet of Vietnam War-era Sea Knight helicopters, according to the 3rd Marine Expeditionary Force and Marine Corps Bases Japan public affairs office.

The aircraft, which can take off like a helicopter and fly like a propeller airplane, has already been put into combat service in Iraq and Afghanistan, and despite a rocky development stage, has had few reported accidents during the past four years of combat flights.

But the Okinawa government has staunchly opposed locating the new aircraft at Futenma, calling them too &ldquo;dangerous&rdquo; for a military base located in a densely populated area. In 2004, a Marine Corps Sea Stallion helicopter based at the air station crashed on the neighboring campus of a Japanese university. The event continues to invoke animosity toward the large U.S. military presence on the island.

&ldquo;At Marine Corps Air Station Futenma, 24 CH-46 [Sea Knight] helicopters will be replaced by 24 MV-22 [Osprey] tilt-rotor aircraft,&rdquo; according to a Marine Corps written response to a Stars and Stripes inquiry. &ldquo;Although we anticipate that the MV-22 will be deployed to Okinawa starting in fiscal year 2013, no final decisions have been made regarding the timing of their arrival.&rdquo;

The Futenma air station is scheduled to be relocated to an area farther north near the city of Nago following an agreement between the U.S. and Japanese governments, meaning the Ospreys could quickly be moved from the urban area around Futenma to an area less populated.

But the relocation plans have been under intense pressure for years due to opposition from Okinawans who want the base moved off the island. The island makes up a powerful lobby in Japan that has bedeviled the Tokyo government and caused the resignation of former Prime Minister Yukio Hatoyama because he could not make good on promises involving Futenma.

Ginowan, where the air station is located, came out strongly against the Osprey plans Thursday.

&ldquo;If the plan is pursued, Ginowan City and its residents will take every action necessary to stop it,&rdquo; said Shigeo Yamauchi, chief of the city&rsquo;s military affairs office.

Tatsuo Oyakawa, chief of the Okinawa prefectural government&rsquo;s Military Affairs Office, told Stars and Stripes on Thursday that Okinawa will oppose the plan with one voice.

&ldquo;Futenma air station is a facility that is supposed to be closed,&rdquo; Oyakawa said. &ldquo;Arrival of the Osprey is an addition to an already-heavy burden on residents in communities surrounding the air station.&rdquo;

Meanwhile, members of the Senate Armed Services Committee last month criticized the cost of U.S. military plans to move Futenma north and said the plan should be abandoned, striking a powerful blow on the U.S. side of the equation.

The Ospreys and the growing scrutiny over costs threaten to ratchet up tension in advance of an expected June 21 meeting on the Futenma relocation and a planned military realignment in the region between Secretary of State Hillary Clinton, Defense Secretary Robert Gates, Japan Defense Minister Toshimi Kitazawa and Japan Foreign Minister Takeaki Matsumoto.