‘Once in a lifetime opportunity’: Navy captain runs Olympic torch in Sasebo, Japan Capt. Brad Stalling, the chief of staff for U.S. Naval Forces Japan, was one of 16 people to carry the Olympic flame through Sasebo, Japan, Saturday, May 8, 2021. (U.S. Navy)

Capt. Brad Stalling, the chief of staff for U.S. Naval Forces Japan, was one of 16 people to carry the Olympic flame through Sasebo, Japan, Saturday, May 8, 2021. (U.S. Navy) 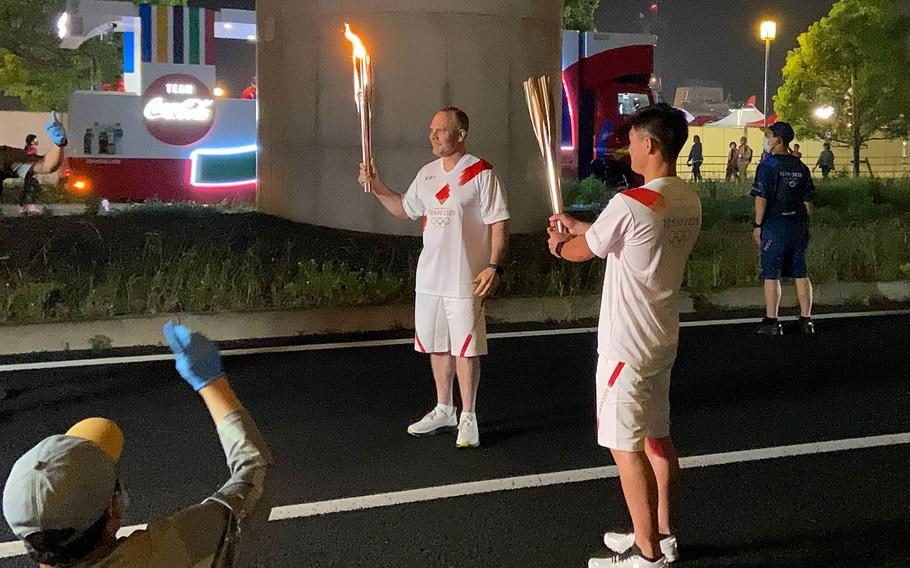 The former commander of Sasebo Naval Base savored a rare opportunity Saturday as he helped run the Nagasaki prefecture leg of the Tokyo 2020 Olympic Torch Relay in Sasebo, Japan.

Capt. Brad Stallings, who now serves as the U.S. Naval Forces Japan chief of staff, was nominated to be a torch bearer by Sasebo City 1 ½ years ago, base spokesman Aki Nichols told Stars and Stripes by phone Monday. The city wanted to recognize its relationship with the Navy.

“This was a once in a lifetime opportunity,” Stallings said in an interview with Japanese broadcasting company NHK.

Stallings said he was devastated when he thought the event would be canceled because of the coronavirus pandemic and was extremely grateful he got the rare opportunity to bear an Olympic flame.

“I felt a lot of pride,” he told NHK. “It was overwhelming and one of the most positive experiences I have ever had.”

Stallings also joked that he was focused on not tripping with the lit torch in hand.

Stallings traveled from Yokosuka Naval Base to participate in the event and carried the flame alongside 15 other city representatives.

“It was great to come back to Sasebo and see a lot of friendly faces,” he said.

Stallings after three years handed command of the naval base to Capt. David Adams in September. His final year in charge was marked by a mission to keep the base and the ships of the amphibious ready group there free of the coronavirus.

The theme for the Tokyo 2020 Olympic Torch Relay across Japan is “hope lights our way.” Torchbearers are running the flame by famous landmarks and sites that are favorites of the local population, according to the official Tokyo 2020 website.

The flame will pass near Marine Corps Air Station Iwakuni on May 13; Misawa Air Base on June 11; Yokosuka Naval Base and Naval Air Facility Atsugi on June 29; and Yokota Air Base on July 12. Its journey will end in Shinjuku, Tokyo, on July 23 for the start of the summer games.

Specific times for each location can be found on the Tokyo 2020 website.