"Do not allow Chinese invasion of Senkaku Islands," reads this sign carried by these two Okinawans who attended a rally supportive of the U.S.-Japan Security Treaty Monday in Naha. The Senkaku Islands, located between Okinawa and Taiwan, is administered by Japan but also claimed by China and Taiwan. (Matt Orr/ Stars and Stripes)

"Do not allow Chinese invasion of Senkaku Islands," reads this sign carried by these two Okinawans who attended a rally supportive of the U.S.-Japan Security Treaty Monday in Naha. The Senkaku Islands, located between Okinawa and Taiwan, is administered by Japan but also claimed by China and Taiwan. (Matt Orr/ Stars and Stripes) Supporters of the U.S.-Japan Secutiry Treaty take to the streets in Naha on Monday afer a rally in downtown Naha that drew about 250 people. (Matt Orr/ Stars and Stripes) 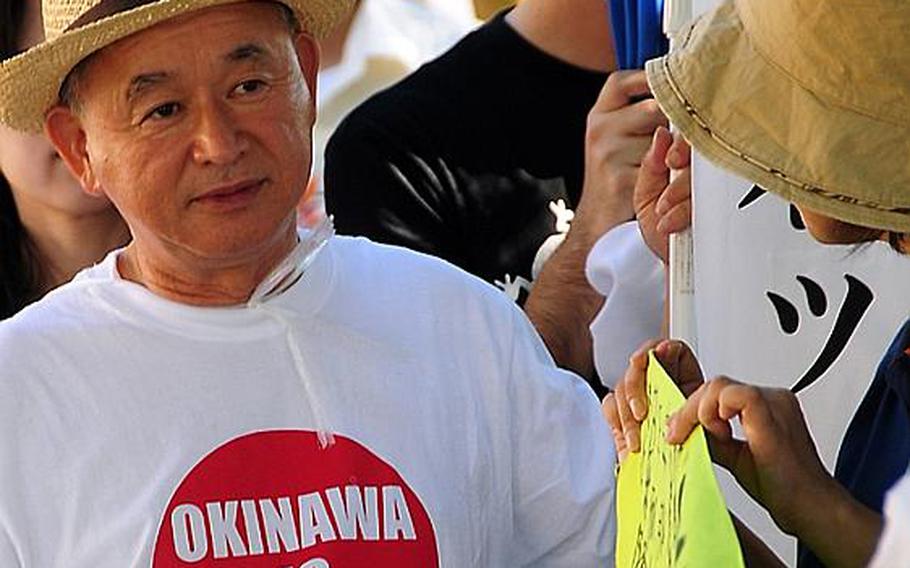 Proclaiming ?Okinawa is Japan? supporters of the U.S.-Japan Secutiry Treaty rally Monday in Naha, the capital of Okinawa Prefecture. Speakers at the rally said U.S. forces on Okinawa are a necessary deterrent to China&#39;s military muscle-flexing in the region. (Matt Orr/ Stars and Stripes) Supporters of U.S. military bases on OKinawa march along Highway 58 in Naha on Monday. About 250 people attended a rally supporting the U.S.-Japan Secutiry Treaty and objecting top China&#39;s military build-up in the region. (Matt Orr/ Stars and Stripes)

NAHA, Okinawa &mdash; With tension increasing between China and Japan, now is not the time to seek reducing the number of U.S. troops on Okinawa, advocates at a rare pro-base rally here Monday.

Some 250 supporters of the U.S.-Japan Security Treaty attended the event, co-sponsored by All Japan Jiritsu Saiken Network and the U.S. Forces Base Network Union, a pro-military labor union for Japanese employees on military bases.

Following speeches by 10 speakers, participants marched along Highway 58 hoisting Japanese and U.S. flags and banners that demanded the Japanese government take a strong stance against China and strengthen the U.S.-Japan alliance.

The group also supports the current bilateral agreement to close Marine Corps Air Station Futenma, in urban Ginowan, and move the air units to a new facility to be built on Okinawa&rsquo;s rural northeast shore.

The rally comes as Japan-China relations have become strained because of an incident near the island of Ishigaki, between Okinawa and Taiwan.

On Sept. 8, the captain and crew of a Chinese commercial fishing vessel were detained by Japanese authorities a day after their boat allegedly struck two Japan coast guard vessels in disputed waters south of Ishigaki. Fourteen crew members and the boat were returned to China on Sept. 14, but the captain remains detained and faces criminal charges.

China vowed on Sunday to take &ldquo;strong countermeasures&rdquo; if Japan fails to release the captain. China already postponed bilateral talks with Japan on a proposed treaty to allow joint development of a gas field in the disputed waters and cut back on allowing Chinese tourists to visit Japan.

The area where the incident took place is near the uninhabited Senkaku Islands, administered by Japan and claimed by both China and Taiwan.

&ldquo;Japan is now facing a crisis,&rdquo; said Toshiko Nakamura, 89, a retired school teacher who addressed the crowd inside a martial arts arena in Naha.

&ldquo;The Senkaku Islands have never been part of China,&rdquo; she said. She criticized recent claims by Chinese scholars that claim Okinawa actually belonged to China when the island prospered as the Ryukyu Kingdom before Japan annexed the islands in the 19th century.

The pro-base supporters are a distinct minority on Okinawa, where about 90,000 people attended a rally in April to protest any new U.S. base construction on the island.