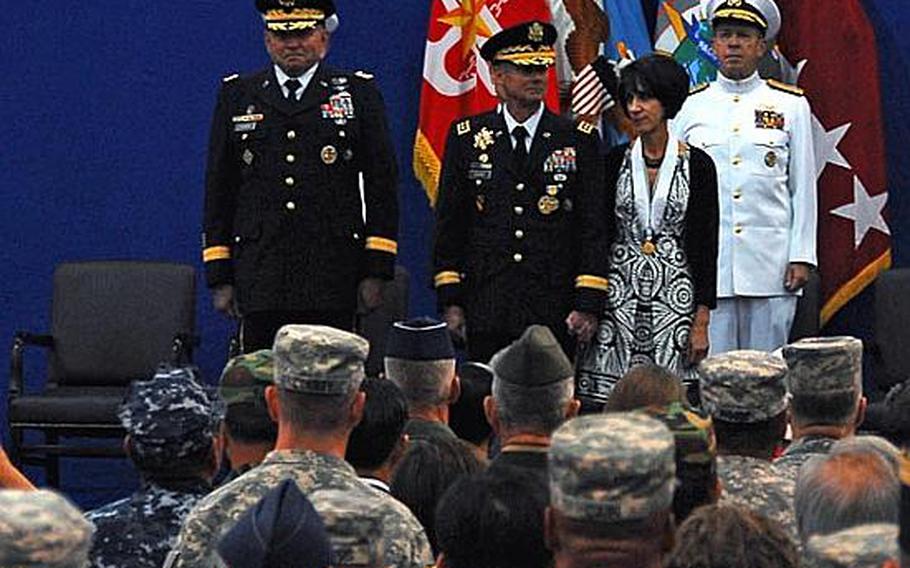 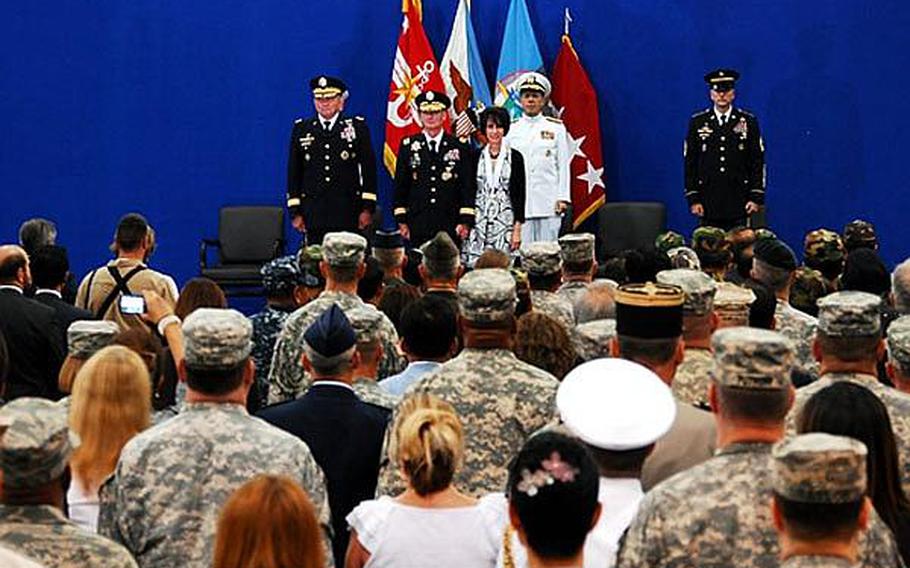 SEOUL &mdash; Attacks from North Korea are still a top concern on the peninsula, the outgoing head of U.S. Forces Korea stressed this week before handing over command.

&ldquo;People talk about, let&rsquo;s return to the status quo, but unfortunately the status quo is a couple of attacks a year now,&rdquo; said Gen. Walter Sharp, who stepped down Thursday following a three-year tenure that saw tensions with the North rise to their highest level in decades.

In an exit interview Wednesday with Stars and Stripes, Sharp said that in 2010 &ldquo;a lot of people really became aware of North Korea&rsquo;s not only capability, but more importantly willingness to use that capability.&rdquo;

The attacks on the Cheonan and Yeonpyeong Island prompted the U.S. and South Korea to stage a number of exercises aimed at deterring the North from future attacks. After the Yeonpyeong attack in November, Seoul pledged to respond to future provocations with force and has since bolstered its defenses along its northern border.

&ldquo;I think Kim Jong Il in retrospect probably regrets that because he killed civilians and changed the perspective of Korean citizens for the foreseeable future,&rdquo; Sharp said.

He said the Yeonpyeong shelling was an isolated attack, and he never saw indicators that the North planned an all-out attack against the South. But he does expect the North, which continues to develop its ballistic missile and nuclear capabilities, to continue its cycle of threatening its neighbors and asking for concessions.

In particular, he worries about what North Korea might do before and during 2012, which marks the 100th anniversary of the birth of North Korean founder Kim Il Sung and the year in which the government has promised it will become a &ldquo;strong and prosperous nation.&rdquo;

&ldquo;You&rsquo;ve got to question, what are they going to do to try to prove that, one way or the other?&rdquo; Sharp said.

Sharp oversaw a number of significant changes for U.S. troops during his tenure, including his decision to lift an overnight curfew and the start of a tour normalization program that will eventually allow one-half of the troops on the peninsula to be stationed with their families. Since late 2008, the number of command-sponsored troops, who serve two- or three-year tours instead of the traditional one-year tour, increased from 1,800 to 4,300. Another 1,700 families live in South Korea without command sponsorship.

Despite recent criticism from the Senate that South Korea is unsafe for military families, Sharp said the military sees indicators that would let it know in advance if North Korea was planning an all-out attack, and could evacuate those families before an attack. Sharp also said he is convinced that construction at U.S. Army Garrison-Humphreys, a key piece of the relocation project, will be completed by late 2016.

The Pyeongtaek-area base is undergoing a massive expansion and will eventually house approximately 17,000 U.S. troops, allowing most bases in and north of Seoul to be returned to South Korean control.

He said design plans and construction have progressed to the point that officials can realistically determine the completion date of the project.

&ldquo;All of the previous estimates we had were just that &mdash; they were estimates,&rdquo; he said. &ldquo;Now, we are so much farther along.&rdquo;

The move to Humphreys will also increase safety for military families because they will be out of range of North Korean artillery that can hit Seoul, and because of the base&rsquo;s location they could be more quickly evacuated out of the country, he said.

But some in the U.S. Senate are questioning the military&rsquo;s long-term plans.

During his Senate confirmation hearing last month, Thurman said he plans to make a reassessment of the realignment plan his No.1 priority. He also pledged to review the tour normalization program, which rests on the expensive construction of schools and family-friendly facilities at military installations in South Korea.

&ldquo;I&rsquo;m well aware of the fiscal constraints we&rsquo;re under as a nation,&rdquo; the Oklahoma native said during the hearing, also noting that he believes Kim Jong Il remains unpredictable and the top security threat in North Asia.

Sharp said Thurman&rsquo;s background as a division commander in Iraq makes him particularly suited to command troops in South Korea.

In addition to heading U.S. forces in South Korea, Thurman will also head the U.S.-South Korea&rsquo;s Combined Forces Command and the United Nations Command, responsible for maintaining the armistice on the peninsula. One of his key jobs will be preparing for South Korea to assume operational wartime control of its troops in December 2015. Until then, Thurman will maintain operational control of all forces in the country in the event of war.

As the former head of the U.S. Forces Command, Thurman oversaw the manning, training and equipping of more than 700,000 soldiers in the U.S.

Sharp is retiring this summer after 37 years of military service. He plans to move to Washington, D.C., with his wife, Joanne, and advocate for continued strengthening of the U.S.-South Korean alliance.