Navy sends a pair of guided-missile destroyers through Taiwan Strait 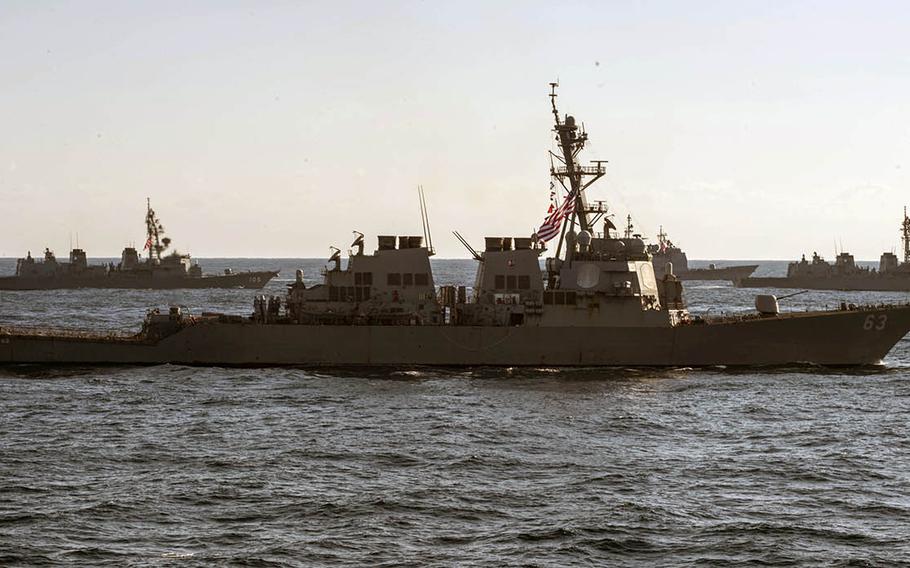 Two Navy destroyers cruised through the Taiwan Strait on Sunday and Monday, the latest in a series of transits that challenge China’s claims of sovereignty over the strategic waterway.

The transit shows the United States’ commitment to maintaining free and open navigation in the Indo-Pacific region, he said.

The U.S. has sent vessels through the 112-mile-wide strait, which separates Taiwan and China, almost once a month since October.

In March, the U.S. Coast Guard cutter Bertholf transited the strait alongside the destroyer USS Curtis Wilbur, a Navy destroyer.

Prior to October, there had been only one Taiwan Strait transit by U.S. naval vessels — the USS Mustin and USS Benfold in July — reported in more than a year.

China regards Taiwan as a renegade province that must, at some point, be reunified with the mainland. The U.S. normalized diplomatic ties with Beijing in 1979 and has agreed that China has sovereignty over Taiwan under the “One China” policy.

But the U.S. has continued informal support for the island under the United States Taiwan Relations Act, and sells arms and provides military training to the country.

China’s Global Times later stated in an article that Beijing’s flight operations in the strait “could become routine and the ‘middle line’ could become history” if the U.S. and Taiwan “upgrade their provocative actions” against China.