Construction equipment is visible behind a wall on Jeju Island in South Korea where South Korea is building a controversial naval base. Officials say the base will better enable the South Korean navy to police sea lanes south of the island. (Jon Rabiroff/Stars and Stripes)

Construction equipment is visible behind a wall on Jeju Island in South Korea where South Korea is building a controversial naval base. Officials say the base will better enable the South Korean navy to police sea lanes south of the island. (Jon Rabiroff/Stars and Stripes) Opponents of a naval base being built on Jeju Island in South Korea leave their mark on a wall surrounding the construction site. Some Jeju residents believe the base will make the island a primary target in the event of future hostilities in the region. (Jon Rabiroff/Stars and Stripes) Work continues on Jeju Island in South Korea where the Jeju Multipurpose Port Complex is under construction. The controversial base is scheduled to open in 2015. (Jon Rabiroff/Stars and Stripes) 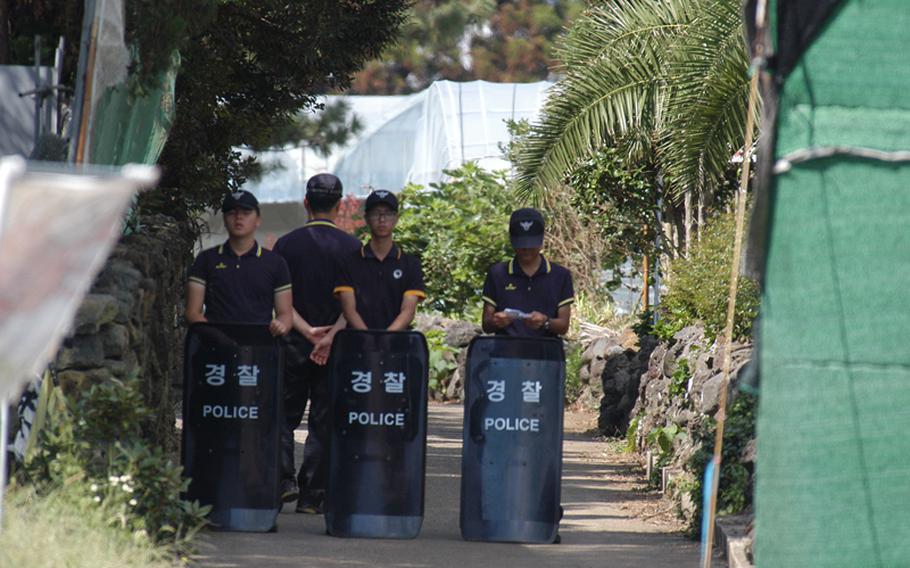 South Korean police guard an entrance to a construction site on Jeju Island where a controversial naval base is being built. The site has been the scene of sometimes-violent protests staged by people afraid the base will make the island a primary target in the event of future hostilities. (Jon Rabiroff/Stars and Stripes) Opponents of a naval base now being built on Jeju Island in South Korea gather for a "Mass for life and peace" near the construction site. As noted in a sign posted at the opponents' protest site, critics of the project believe the base construction is bad for the environment. (Jon Rabiroff/Stars and Stripes) Opponents of a naval base being built on Jeju Island in South Korea sing during a "Mass for life and peace" near the construction site. Critics of the project fear the base will make the tourist destination island a primary target in the event of future hostilities in the region. (Jon Rabiroff/Stars and Stripes) 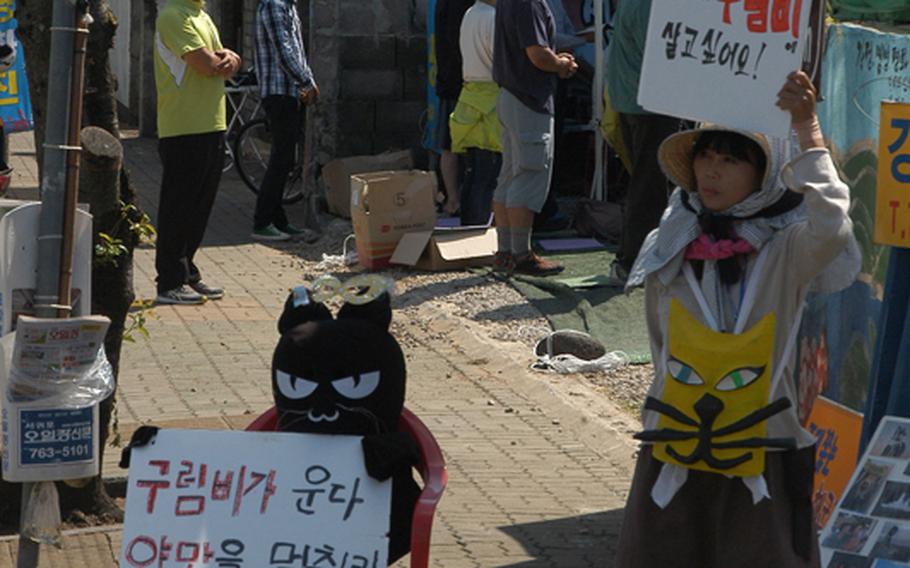 An opponent of a naval base being built on Jeju Island in South Korea holds up a protest sign in Gangjeong, a village near the construction site. (Jon Rabiroff/Stars and Stripes) 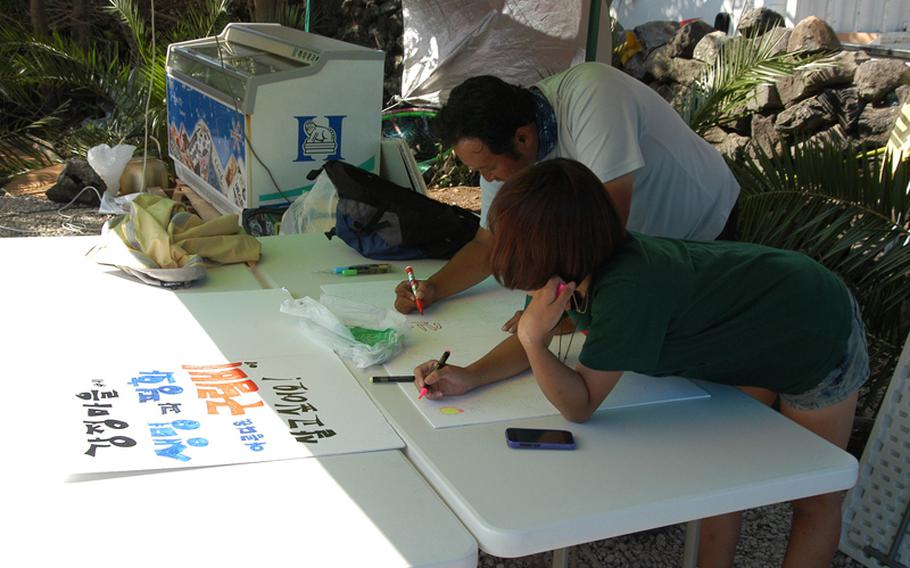 Opponents of a naval base being built on Jeju Island in South Korea work on protest signs near the construction site. (Jon Rabiroff/Stars and Stripes) Yellow flags of protest fly on the properties of villagers on Jeju Island in South Korea who are opposed to the ongoing construction of a naval base nearby. (Jon Rabiroff/Stars and Stripes) 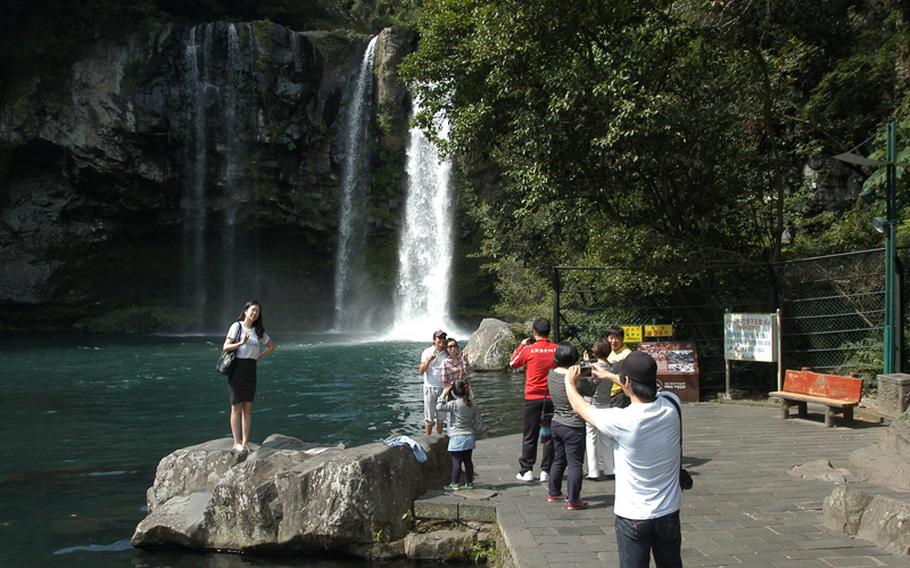 Visitors pose for photos at Cheonjiyeon Falls, one of many natural wonders on Jeju Island in South Korea. Residents of the island are divided on whether a South Korean naval base under construction there is a good idea given Jeju's natural beauty and designation as an "island of world peace." (Jon Rabiroff/Stars and Stripes) A cruise ship heads out to sea from Jeju Island in South Korea, just miles from the site of a controversial naval base under construction and scheduled to open in 2015. (Jon Rabiroff/Stars and Stripes)

This story has been updated

A popular tourist destination, Jeju boasts some of the world&rsquo;s most beautiful scenery and is one of 28 finalists in an international competition for selection as one of the &ldquo;New 7 Wonders of Nature.&rdquo; Yet it&rsquo;s also home to a number of cheesy tourist stops, including Jeju Love Land, a sexual theme park.

In 2005, the South Korean government officially recognized Jeju as the &ldquo;island of world peace,&rdquo; and then-President Roh Moo-hyun said he would do his best to make it a &ldquo;center of peace in Northeast Asia.&rdquo; But South Korea is now building a naval base on the island for the expressed purpose of enhancing its ability to police its vital shipping lanes and respond faster to any North Korean threats.

Critics suggest that once the base opens in 2015, the U.S. will use it extensively, with the goal of keeping an eye on China. That, they say, could make the &ldquo;island of world peace&rdquo; a target the next time hostilities erupt in the region.

The project clearly has gotten the attention of officials in North Korea and China.

In a story last month carried by North Korea&rsquo;s Korean Central News Agency, a government official called the construction project &ldquo;a heinous criminal move&rdquo; designed to turn the island into a base of military operations &ldquo;targeted against (North Korea) and its neighboring countries to meet the need of the U.S. aggression.&rdquo;

&ldquo;South Korea is destroying the tourist resources on Jeju Island and changing the natural and human environment of the island, just in order to build a military base and turn the original &lsquo;peaceful window&rsquo; into a weapon aimed at its neighbor,&rdquo; the article said.

Troy University international relations professor Brendan Howe, who is based in Seoul, said it should come as no surprise that the two countries are making political fodder out of the base controversy &ndash; the North as &ldquo;yet another reason to pursue a &lsquo;military first&rsquo; policy,&rdquo; and China &ldquo;thereby deflecting criticism of its aircraft carrier program and its own aggressive posturing in the southern seas.&rdquo;

Yang Mu-jin, a professor of politics and unification studies at the University of North Korean Studies in Seoul, said if the South someday gets into a conflict with China, the island base &ldquo;may increase the possibility of U.S. intervention and facilitate the rotation of large American ships, like aircraft carriers,&rdquo; through Jeju.

The base could also prompt China to hasten the buildup of its naval firepower, further heightening tensions on the Korean peninsula, he said.

Visitors to the oblong-shaped island, which stretches about 45 miles from end to end, would be hard-pressed to find evidence that it has been home to a sometimes-violent, years-long battle over the construction of what will be known as the Jeju Multipurpose Port Complex.

But that all changes as you approach the tiny village of Gangjeong on the southern coast.

Yellow flags fly high on poles in yards whose households are opposed to the naval base. At a corner of the main intersection in town, activists working against the project mill about at a small base of operations adorned with protest signs and temporary tarps.

And down the road from the village&rsquo;s downtown area, a wall &ndash; about 15 feet tall in some places &mdash; does a relatively poor job of hiding the construction once again under way on the almost $1 billion port complex. Construction began in January, but was suspended for more than three months and was not able to resume until early September when police forcibly removed protesters from the site.

When finished, the 125-acre base will be home to about 20 South Korean warships and submarines, and there will be facilities to accommodate cruise ships.

The base will also be available for use by the U.S. military, but it is not clear exactly how.

U.S. Forces Korea referred all questions about the base to the South Korean Ministry of National Defense, even those specific to potential U.S. military operations. The ministry, in a seven-page August release designed to quell concerns over the base, played down the significance of the U.S. military&rsquo;s access to the facility.

&ldquo;South Korea could allow its key ally, the U.S., to use the base, albeit temporarily,&rdquo; the release said. &ldquo;But &hellip; many vessels from many countries, including China and Japan, can make calls at the Jeju port to join international military exercises or for other purposes.

&ldquo;Therefore, (the) U.S. making calls at the base does not mean the U.S. military is using the port as its military outpost,&rdquo; the release said.

As for China, the ministry release said, &ldquo;The base construction on Jeju is aimed at securing South Korea&rsquo;s maritime sovereignty and interest. The project, needless to say, will not cause (a) struggle between the U.S. and China to security maritime hegemony by irritating China.&rdquo;

Yang - pointing to a number of potential areas of conflict in the region - said , &ldquo;I see the U.S. military using the new base whenever it needs it. U.S. military forces will mobilize from Jeju Island &hellip; of course.&rdquo;

Howe doesn&rsquo;t see the naval base &ldquo;as part of hegemonic military expansion in the region as some critics would have it. I think that the base actually adds little to existing U.S. military capabilities beyond what is already present in both the (South Korean) mainland and Okinawa.&rdquo;

However, he thinks the base could be a public relations nightmare for South Korea and the U.S.

&ldquo;With regard to allowing U.S. ships to use the base, although this is pretty much standard operating procedure,&rdquo; he said, &ldquo;the negative consequences in terms of public reaction to the violation of the principles of an island of peace could ultimately outweigh the strategic benefit of offering the best service to an ally.&rdquo;

So why is the South Korean military building the controversial base on the country&rsquo;s idyllic island?

The defense ministry pointed out that two years after Roh was a driving force in getting Jeju its &ldquo;island of world peace&rdquo; designation, he pledged his support for building a naval base there because, he said, &ldquo;peace without armament cannot exist.&rdquo;

&ldquo;The project is not aimed at building a military-only base for war,&rdquo; the ministry&rsquo;s August report said. &ldquo;It is targeted at preventing war by strengthening maritime sovereignty, realizing peace and supporting other naval warships of South Korea.&rdquo;

Pointing to other &ldquo;successful civilian-military harbor complexes&rdquo; like those in San Diego and Hawaii, the defense ministry said the naval base and the island of world peace &ldquo;both can coexist in (a) mutually complimentary manner.&rdquo;

The base will allow the South Korean navy to better police the sea lanes to the south of the island used to transport a majority of the goods to and from the Korean peninsula, the ministry report said. If those lanes are blocked for more than 15 days, basic industry would be &ldquo;paralyzed,&rdquo; which would harm national interests and security, the report said.

The Jeju base &ndash; positioned about 55 miles south of the Korean mainland - will enable the South Korean navy to better respond east or west of the peninsula in the event of trouble with North Korea, the report said.

Finally, the ministry said, the cruise ships operating out of the &ldquo;eco-friendly&rdquo; base will promote tourism and boost Jeju Island&rsquo;s economy.

For several years, the naval base project has been the source of divided opinion, legal battles and sometimes violent protests on Jeju Island.

After helping to lead a recent &ldquo;Mass for life and peace&rdquo; for base project opponents, the Rev. Jerry Cotter - a retired priest who lives on the island - said the controversy cuts especially deep there because, &ldquo;Korea as a whole, and especially Jeju Island, has had a sad history of victimization.&rdquo;

As the Korean War started in 1950, government forces launched a crackdown on Jeju residents they suspected were North Korea sympathizers, and 30,000 islanders were killed.

The ministry points to surveys that show a majority of island residents support the base construction. Cotter counters that most oppose the project for a variety of reasons, including its impact on the environment, the people displaced by the construction and how the facility may bring war to the shores of the &ldquo;island of world peace.&rdquo;

&ldquo;If there&rsquo;s not going to be a war, you don&rsquo;t need a naval base,&rdquo; he said. &ldquo;And, if there is a war, the first place that will be attacked is right here and the people around here. They might call it &lsquo;collateral damage,&rsquo; but when you&rsquo;re killed it doesn&rsquo;t matter what you call it.&rdquo;

UpdateSouth Korean officials revised the projected completion date of the project from 2014 to 2015.