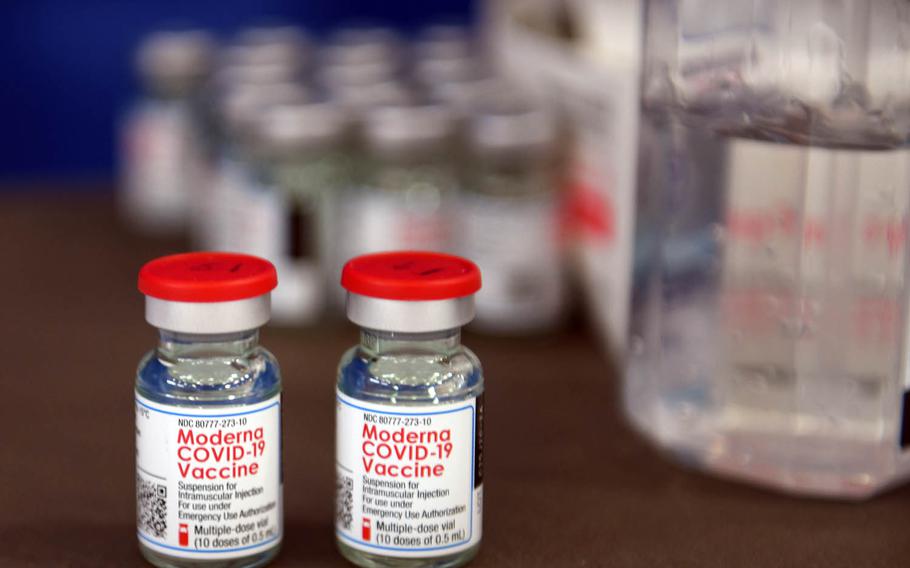 TOKYO — At least two more U.S. military bases in Japan are administering the Moderna vaccine to essential workers, including teachers, bringing them another step closer to getting their installations fully inoculated.

Yokota and Misawa air bases are vaccinating teachers and school support staff, commissary workers and other individuals in phase 1b — “critical and essential support personnel” — of a three-phase Defense Department plan to administer the vaccine, base spokesmen told Stars and Stripes on Wednesday.

The Moderna vaccine must be taken voluntarily because it was approved for emergency use by the U.S. Food and Drug Administration in December.

“Currently, all DODEA Pacific teachers interested in voluntarily receiving the vaccine at Misawa and [Camp Zama] have received at least one dose,” DODEA Pacific spokeswoman Miranda Ferguson wrote Tuesday in an email to Stars and Stripes.

In at least six instances since Jan. 1, some DODEA-Pacific classrooms, school buildings and one bus route were temporarily closed because of potential coronavirus exposure.

Zama, the headquarters of U.S. Army Japan near Tokyo, is furthest along in the vaccination plan among bases in Japan that publicly update their status. It began inoculating people in phase 2 on Jan. 23, including those at a higher risk of infection, the families of Defense Department employees and contractors and anyone over age 18 not previously vaccinated.

The pace at which installations inoculate their people depends upon the vaccine’s availability, a base’s location and the ratio of people in each category, a spokesman for U.S. Forces Japan and other commanders have said.

Some installations, such as Marine Corps Air Station Iwakuni, will not publicly state their progress distributing the vaccine until phase 1c, which includes people over age 65 or with an increased risk for severe illness, spokesman Maj. Joshua Diddams said Tuesday by phone.

Unit commanders or medical care providers should inform people what category they fall under, he said.

Ultimately, a group is called for its inoculation based on availability of the vaccine and command decisions, Ferguson said.

“Access and timing to the vaccination varies by installation based on availability and the number of personnel volunteering to receive the vaccination,” she said.