Military working dogs get it done at home, in the field 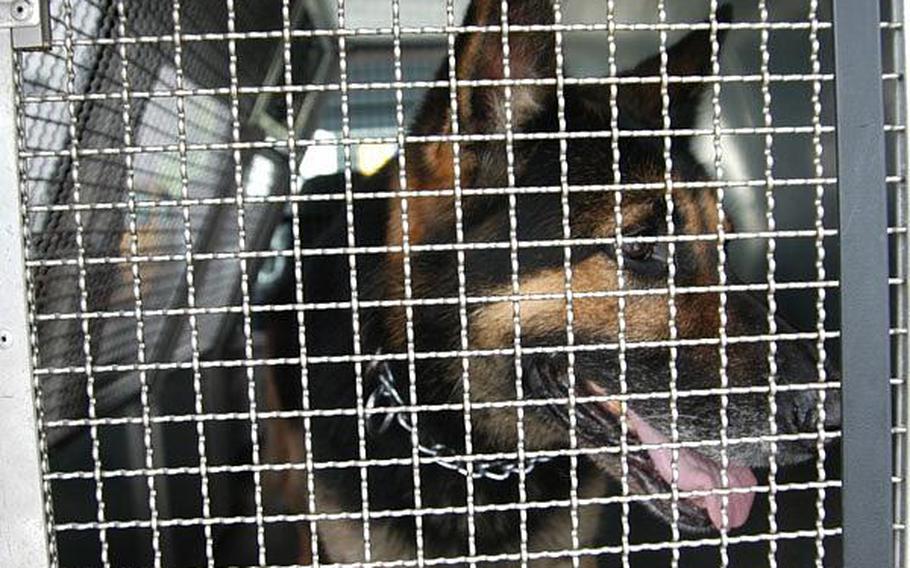 Buy Photo
Asta waits patiently in the back of a security van to get to work. The 4-year-old German shepherd is one of nine military working dogs at Sasebo Naval Base. (Matthew Burke/Stars and Stripes)

Buy Photo
Asta waits patiently in the back of a security van to get to work. The 4-year-old German shepherd is one of nine military working dogs at Sasebo Naval Base. (Matthew Burke/Stars and Stripes) 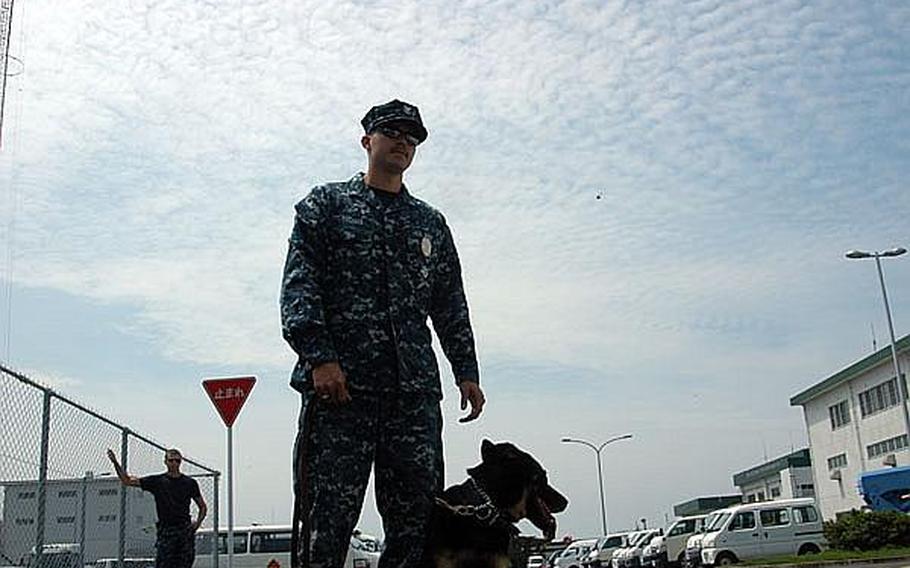 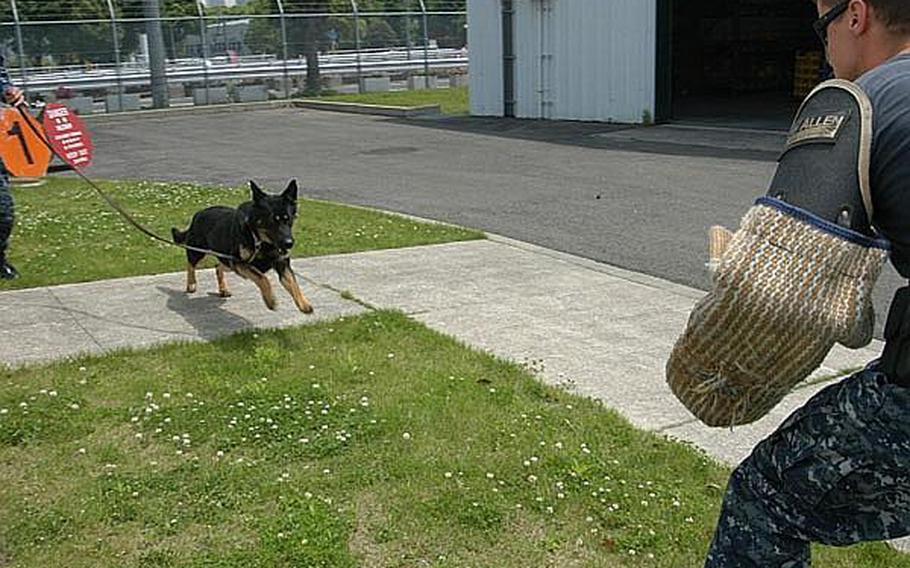 Buy Photo
Seaman Zachary Williams braces himself for impact as Petty Officer 2nd Class Kojiro Thomas instructs Asta to attack. Williams must wear a protective sleeve on his arm to prevent an injury from the strong bite of the military working dog. (Matthew Burke/Stars and Stripes) 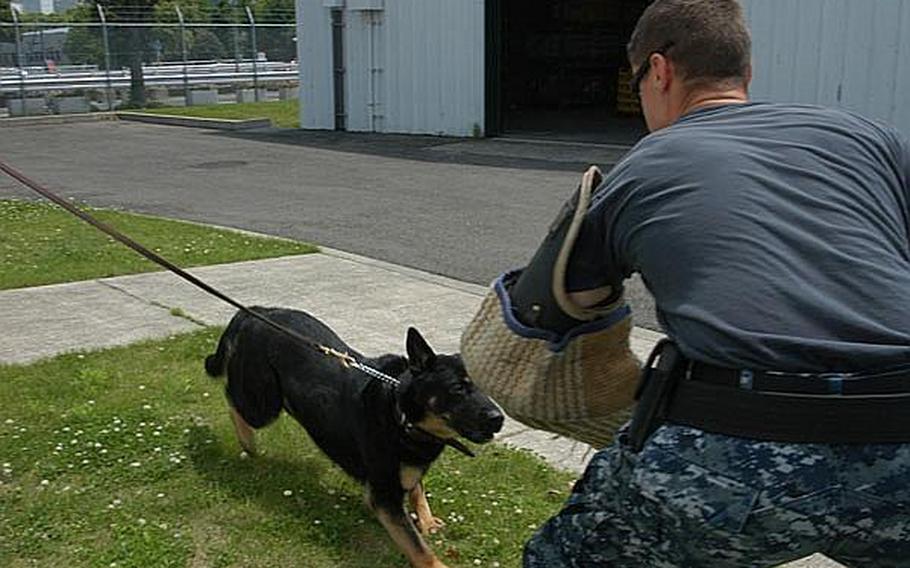 Buy Photo
Asta is spring-loaded as she focuses on the target. (Matthew Burke/Stars and Stripes) 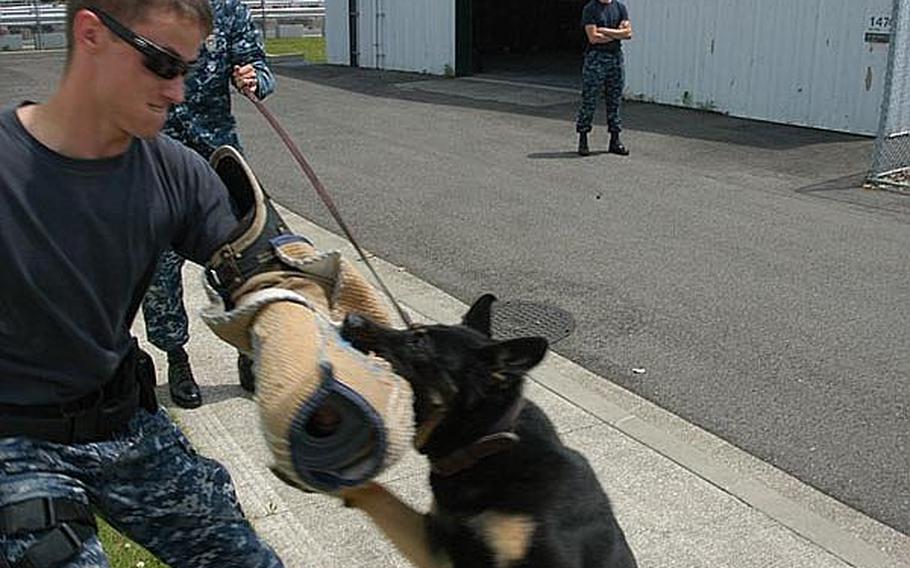 Buy Photo
Williams tenses up as he struggles with the powerful military working dog. (Matthew Burke/Stars and Stripes) 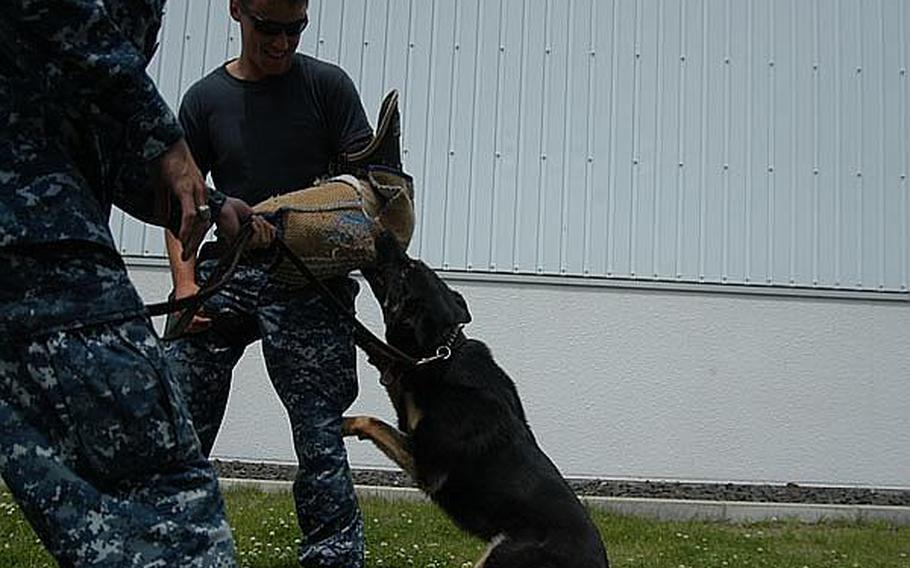 Buy Photo
Asta won't let up in her attack ... (Matthew Burke/Stars and Stripes) 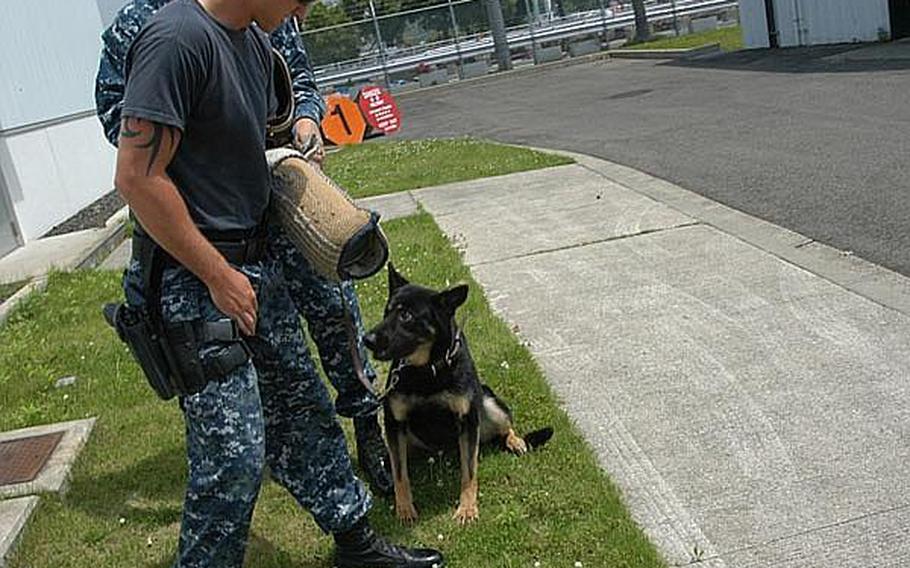 Buy Photo
... unless given the order to stop by her handler. (Matthew Burke/Stars and Stripes)

SASEBO NAVAL BASE, Japan &mdash; Petty Officer 2nd Class Kojiro Thomas walked with purpose through the public works warehouse in the sweltering heat last week with a clipboard in hand.

On the other side of a towering shelving unit was Seaman Alex Monce and his military working dog, Natz, barely visible through stacks of stores.

With its nose to the ground and head on a swivel, the 6-year-old German shepherd bounded down the aisle and around the corner. All Monce had to do was allow some slack on the leash and follow.

After Natz zeroed in on the orange plastic toy - called a &ldquo;Kong&rdquo; - Monce began to whoop and holler loudly, somewhere between a rebel yell and the rallying cry of a hyena. The louder he got, the more excited Natz became. Monce then reached in and pulled out the toy, and Natz got a reward.

&ldquo;When we train, one guy sets up, and the other brings the dog in,&rdquo; Thomas said. &ldquo;The handler helps out if he needs to or just lets the dog work. If the dog locates what they have been sent out to find, they get a reward.

&ldquo;We do that every day to stay sharp.&rdquo;

With the successful raid on Osama bin Laden&rsquo;s Abbottabad compound in Pakistan, military working dogs were once again thrust into the spotlight as details emerged that a dog was on the ground with members of the SEAL unit that took down the world&rsquo;s most wanted terrorist.

Images of dogs wearing Kevlar vests and jumping from planes strapped to the chests of airborne soldiers appeared on television and stories of their exploits ran in print. And while there are dogs out there doing the seemingly unimaginable, they have a more practical application on the battlefield and U.S. military installations around the world.

&ldquo;They&rsquo;re an integral part of the security department,&rdquo; said Chief Warrant Officer John Deal, who spent 16 years as a handler and kennel master before taking a leadership role in security efforts in Sasebo. &ldquo;They&rsquo;re a deterrent for contraband on base. They act as a physical and psychological deterrent for terrorists and criminals. ... Military working dogs are called the &lsquo;guardians of the night.&rsquo; They&rsquo;re out there so you and your family can sleep safely at night on base.&rdquo;

Working dogs were first used by the U.S. military late during World War I when they were loaned to American Expeditionary Forces by the British and Belgians, according to information provided by Department of Defense spokeswoman Lt. Col. Elizabeth Robbins. Since then, their ranks have always swelled during times of war. Today there are 2,700 dogs - up from 1,800 before the 9/11 terrorist attacks - spread out among the service branches.

The dogs perform tasks from sentry duty to drug and explosive detection on base and downrange. They can range in breed from German shepherd to beagle, depending on the task at hand and the breed&rsquo;s particular strengths, Thomas said. They have adapted to serve in each conflict and have become extremely valuable in the current wars in sniffing out makeshift bombs.

Despite being a small base in western Japan, Sasebo has seen its unit members and working dogs deploy to Iraq, Afghanistan and even Africa, Thomas said. Petty Officer 1st Class Rueben Davis was awarded the Bronze Star Medal for his work with his dog, Alva, in Afghanistan in 2009, base commander Capt. Francis Martin said in a statement to Stars and Stripes. Davis has since left the base, Thomas said, but Alva is still here, and now works with Seaman Zachary Williams.

Although the SEAL team took the lion&rsquo;s share of credit for the bin Laden raid, as handlers often do, servicemembers say that the importance of the working dogs cannot be underscored enough. Thomas said he was glad the high-profile raid shed some light on the dogs, who even provide protection for the president.

&ldquo;They&rsquo;re there every day on the frontlines,&rdquo; Deal said. &ldquo;Anywhere you have a mission, you see working dogs. ... The dogs have always been there in the shadows.&rdquo;