Military to calculate radiation doses for those living, working in Japan following earthquake 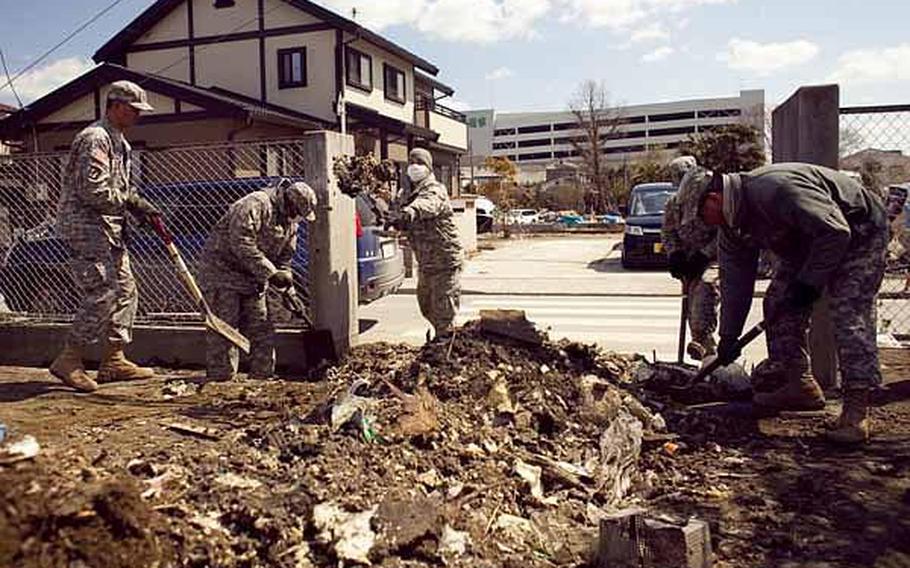 Soldiers from Logistics Task Force 35, shovel debris from a school yard in Ishinomaki, Japan, following the March 11 earthquake and tsunami. Military health officials say that air, water and soil samples tested in the region in April did not contain dangerous levels of toxins or radiation. (Nathan Bailey/Stars and Stripes)

YOKOTA AIR BASE, Japan &mdash; The U.S. military plans to calculate radiation doses received by each of the approximately 61,000 U.S. personnel living and working in Japan during this year&rsquo;s nuclear disaster, according to the U.S. Pacific Command&rsquo;s top surgeon.

Rear Adm. Michael H. Mittelman has been holding town hall meetings on bases in Japan telling residents about the individual radiation dose assessments, which, he said, will be compiled in a register and added to medical records.

&ldquo;People have been potentially exposed to something that is not normal,&rdquo; Mittelman told Stars and Stripes after meeting with about 100 people at Yokota on Wednesday.

&ldquo;While we know their exposures are very low, they are also part of this disaster,&rdquo; he said. &ldquo;We thought it was the responsible thing to do so if there is ever a question, 20 years from now, they can go back and look at what their potential dose was.&rdquo;

Almost 20,000 servicemembers were involved in Operation Tomodachi &ndash; the U.S. effort to help Japan deal with the aftermath of a massive earthquake and tsunami that struck the country March 11. The tsunami damaged the Fukushima Dai-Ichi Nuclear Power Station, leading to the release of a radioactive plume that contaminated air and water as far south as Tokyo.

The radiation fears prompted the military to authorize the voluntary evacuation of 10,000 family members from Japan, ban some local foods from U.S. bases and stop personnel traveling within 50 miles of the Fukushima plant.

Individual radiation doses will be calculated by applying data collected during Operation Tomodachi to models based on those developed for health studies of U.S. atomic test veterans exposed in the 1950s and 1960s, said Armed Forces Radiobiology Research Institute director, Army Col. Mark A. Melanson, whose organization is the leading the dose assessment effort and who is visiting the bases with Mittelman.

The military will look at U.S. and Japanese government data including air, water and soil samples, as well as ambient radiation readings taken at various sites in Japan, he said.

Daily dose estimates will be calculated for particular locations in Japan. This information will be combined with data on individuals&rsquo; locations and how long they were there to find out how much radiation each was exposed to, Melanson said.

&ldquo;We will gather personnel data from installations in Japan to build the basis for the registry. Installations (will) also be aware which individuals proceeded into the warm zone for relief efforts (within 125 nautical miles of the nuclear plant) and which dependents departed Japan via the voluntary authorized departure and for what periods of time,&rdquo; Melanson said, adding that the registry is slated to include reports from March 11 through June 30.

Air Force spouse Mary Nelson, whose husband is deployed to Afghanistan, said she attended the Yokota town hall to gather information to pass on to other spouses and neighbors, but wasn&rsquo;t worried about radiation.

&ldquo;I did evacuate, but that was simply because my parents in the States were worried,&rdquo; she said, adding that the dose registry could be useful if people suffer medical complications in future.

Personnel do not need to do anything as part of the dose assessment process, Mittelman said.

&ldquo;It is automatically going to be done,&rdquo; he said. &ldquo;However, If individuals have additional travel outside of what is tracked by the installations, we would have to talk to those individuals directly to include that data in the registry.&rdquo;

The military has already done &ldquo;internal monitoring&rdquo; of radiation levels inside the bodies of 7,700 personnel who worked in parts of the disaster zone closest to the damaged power plant, he said.

The scans revealed that 98 percent of those personnel did not have elevated radiation inside their bodies, he said. Mittelman said that among the 2 percent of servicemembers (about 154 individuals) with elevated internal radiation levels the highest readings were about 25 millirems, equivalent to the dose that they would receive from 2 1/2 chest X-rays.

AFFRI will work with the Defense Threat Reduction Agency and other experts in radiobiology and epidemiology to compile the radiation data, which will be reviewed by outside experts, Melanson said.

Mittelman said limiting U.S. government liability in future claims by personnel who attributed illness to service in Japan during Operation Tomodachi was not a factor in the decision to compile the data. The radiation dose registry might put some people&rsquo;s minds at rest, he added.

&ldquo;Some people worry if they have been exposed or not,&rdquo; he said. &ldquo;This way they can work with&hellip; their health providers (who) can explain to them the risk that that type of exposure might have presented.&rdquo;

The registry, which has been sanctioned by the assistant secretary of defense for healthy affairs, will be available within 18 months, he said.