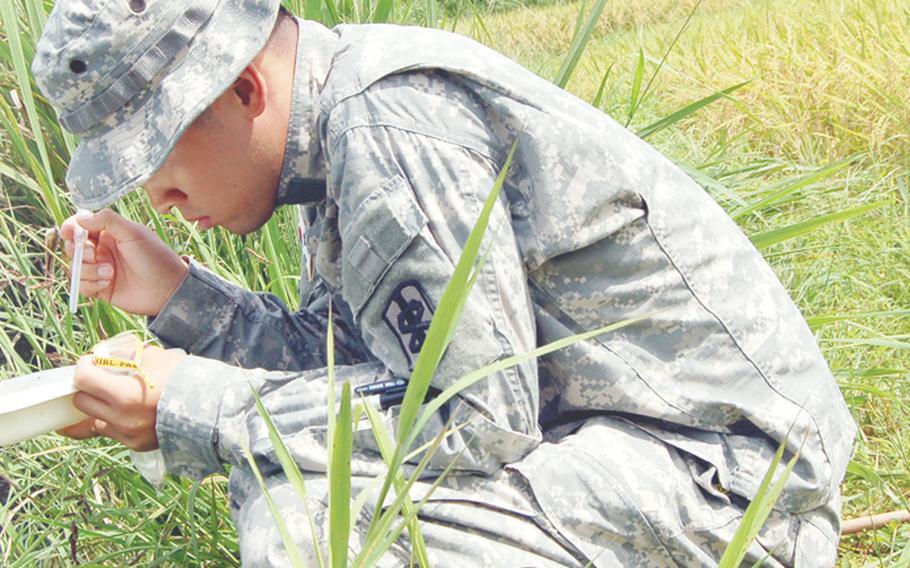 Cpl. Lee Soh-kuem uses an eye-dropper to separate larval mosquitoes from a sample of pond water taken near Warrior Base in South Korea in this 2007 photo. Soh-Keum was working to collect mosquito specimens to help identify which areas might be home to mosquitoes carrying malaria. (Jimmy Norris/Stars and Stripes)

CAMP RED CLOUD, South Korea &mdash; The number of malaria cases among South Koreans living near the Demilitarized Zone is up significantly because North Korea isn&rsquo;t doing its part to help control mosquitoes that carry the disease.

According to local media, the Korea Center for Disease Control and Prevention recently reported close to 300 malaria cases this year in Gyeonggi Province, an increase of more than 25 percent from the same time last year for the area adjacent to the Demilitarized Zone.

Korean officials blame the increase on North Korea, which has refused to spray insecticides this summer as it has in past years. That has led to malaria-carrying mosquitoes making their way south across the DMZ from North Korea, officials said.

When provincial officials noticed the number of malaria cases were starting to increase, they sent a request that the North participate in a joint spraying program as it had in past years. However, local media reports said there was no response.

The number of malaria cases among U.S. troops in South Korea are also up, &ldquo;but not anywhere alarming,&rdquo; according to an Army doctor.

&ldquo;We have seen a slight bump in our patient loads, [but] it&rsquo;s nowhere near what we used to experience,&rdquo; said Lt. Col. Lee Hee-choon, chief of force health protection and preventive medicine for the 65th Medical Brigade.

So far this year, five servicemembers have been diagnosed with malaria in South Korea, four of whom were exposed to the mosquito-borne disease here, he said. The other was exposed while in Africa.

Officials said the drop from 2007 to 2008 could be attributed to a number of possible factors, including the fact that North Korea was participating in a joint spraying program at the time, it was a mild summer and U.S. Forces Korea personnel were doing a better job of following prevention guidelines than they had in years prior.

Health officials in 2007 told Stars and Stripes that despite the guidelines, not all units were taking the necessary precautions to fight malaria. The newspaper learned that the 498th Combat Sustainment Support Battalion, for example, had not issued anti-malaria protection to soldiers during a field exercise at Warrior Base, near DMZ.

Lee said last week that the U.S. military has a three-pronged approach to preventing malaria. Servicemembers are told to wear their uniforms properly, &ldquo;with the sleeves rolled down.&rdquo; In addition, they are instructed to use mosquito repellent with a 33-percent concentration of DEET, a repellent.

Lastly, he said, soldiers based in the DMZ area or sent there to train are supposed to have their uniforms treated with permethrin, another repellent.

Lee said another factor that could be adding to the number of malaria cases in South Korea is the fact that the DMZ &ldquo;is pretty much a pristine nature preserve&rdquo; that is giving rise to a breed of mosquito that is a more efficient carrier of the disease. He pointed out that the cases of malaria &ldquo;are limited to the DMZ area,&rdquo; where U.S. troops in South Korea do most of their training.

&ldquo;It truly has not spread throughout the peninsula,&rdquo; he said.

Symptoms of malaria include chills, fever, vomiting and convulsions. Left untreated, the parasitic infection can be deadly.

&ldquo;Malaria is not a fun disease to have,&rdquo; Lee said.