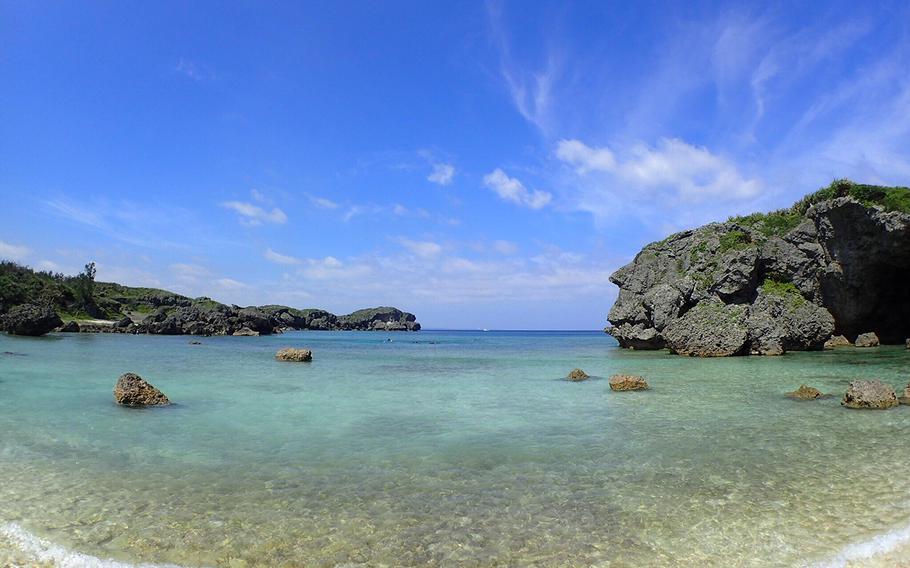 Apogama, or Mermaid Grotto, is a popular diving spot among locals and servicemembers on Okinawa known for interior pools filled with colorful and tropical fish. (Aya Ichihashi/Stars and Stripes)

A caller told emergency responders at 2 p.m. that a group of four U.S. servicemembers were pulled away from shore, said Katsuyuki Miyazato, a spokesman for 11th Regional Coast Guard in Naha.

“We immediately dispatched an AW-139 helicopter and one patrol boat to rescue [them],” he said, adding that three of the swimmers returned the 100 yards to shore on their own.

The helicopter airlifted the remaining 20-year-old from the water back to the coast guard’s base station in Naha.

“The servicemember suffered minor scratches, and base security officers later took him back to the [U.S.] base,” Miyazato said.

The swimmers’ identities and service branches were not known on Tuesday.

A sign posted at Apogama’s entrance, written in English and Japanese, warns visitors of the hazardous and unpredictable water conditions and recommends water-related activities be conducted at a safer location of the island.

“The views are the allure of the site,” said Matt Lewis, a dive instructor at Marine Corps Community Services Tsunami Scuba since 2014. “Where it becomes dangerous is the way the coral is structured. When the tide is coming in or going out, it can cause significant rip tides.”

On Saturday, a high seas warning was in effect, with winds reaching close to 14 knots per second.

Lewis canceled all his diving classes Saturday due to the wind and sea conditions, saying later, “When in doubt, stay out.”

In March, a Japanese diver died near Mermaid Grotto. A U.S. sailor died while diving there in 2016.

“I am not saying don’t swim in the ocean, but please take a moment to check the sea condition and check the tides before you enter the water,” Miyazato said. “Also wear a life vest at all times to avoid the worst case. There have been many water-related incidents amongst tourists and U.S. servicemembers the last few years.”