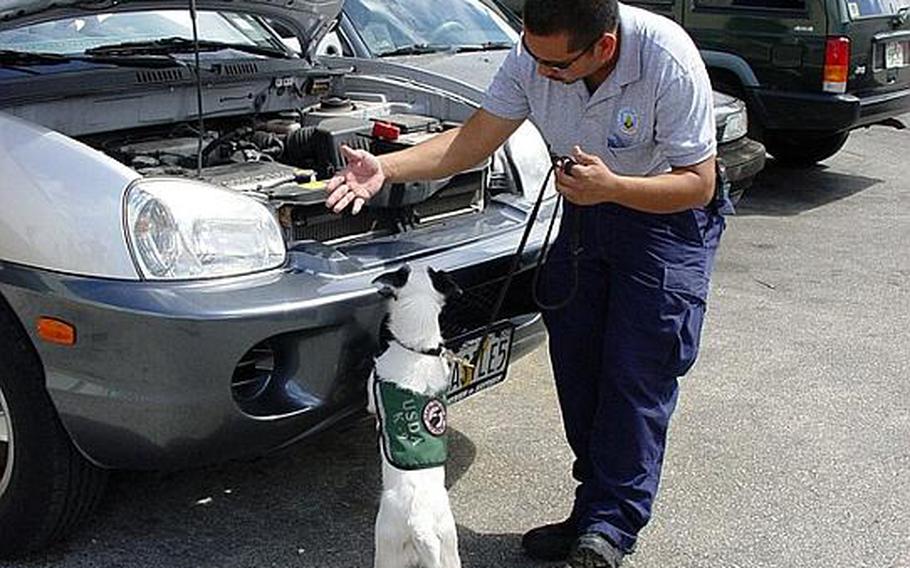 A USDA employee and his search dog inspect vehicles at Guam's airport for the brown tree snake, an invasive pest that has devastated the territory's environment and caused a plague of island electricity blackouts. (Christy Martin/ Courtesy of the Coordinating Group on Alien Pest Species)

A USDA employee and his search dog inspect vehicles at Guam's airport for the brown tree snake, an invasive pest that has devastated the territory's environment and caused a plague of island electricity blackouts. (Christy Martin/ Courtesy of the Coordinating Group on Alien Pest Species) 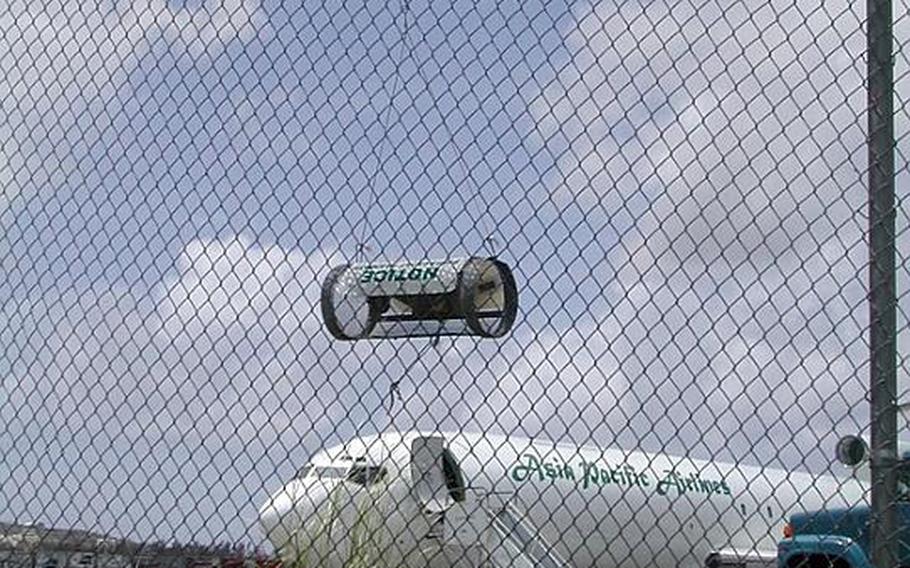 A brown tree snake trap hangs on the fence at Guam&#39;s international airport. (Christy Martin/Courtesy of the Coordinating Group on Alien Pest Species) 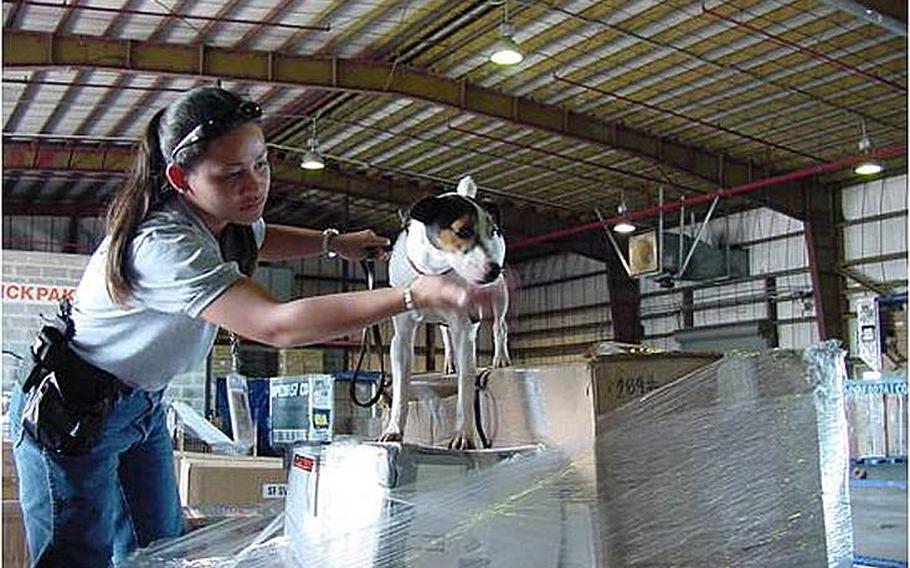 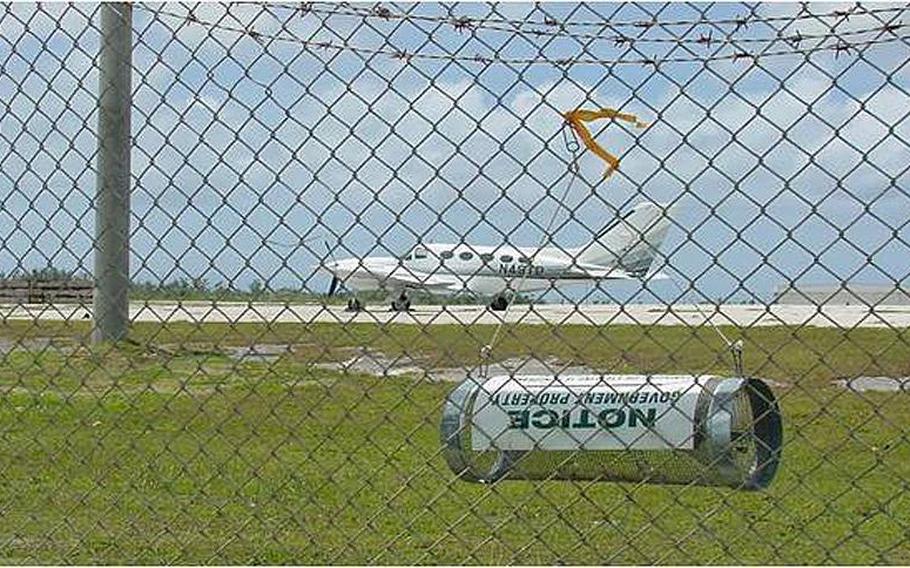 A brown tree snake trap hangs along the fence at Guam&#39;s international airport. (Dan Vice/Courtesy of the U.S. Department of Agriculture) 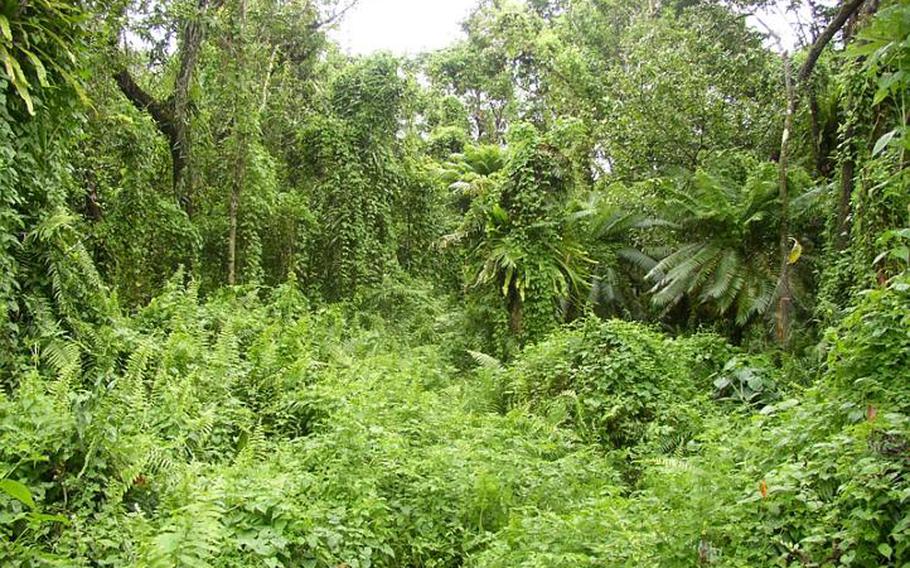 Invasive vines choke out a native jungle on Guam. The island struggles with a variety of environmentally dangerous pests that have been accidentally imported. (Phil Andreozzi/Courtesy of the U.S. National Invasive Species Council) 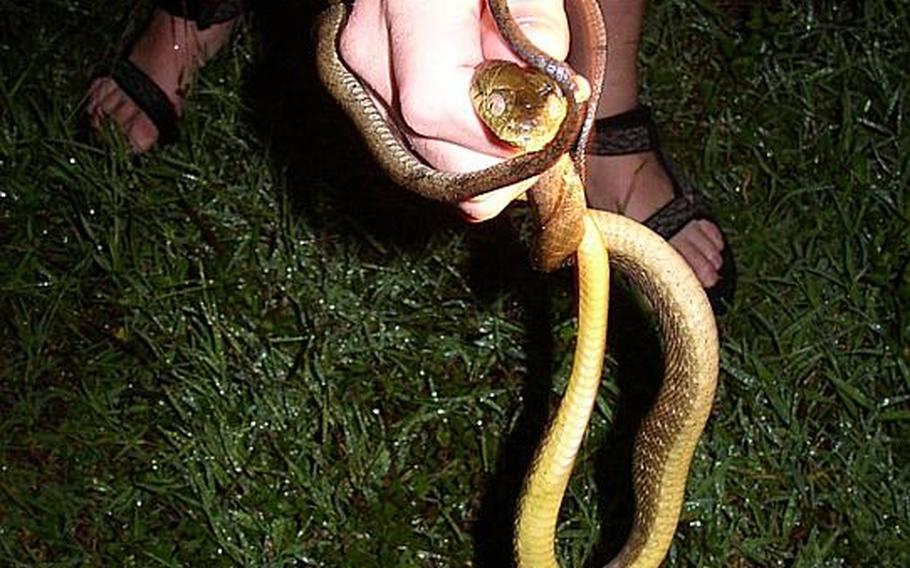 This brown tree snake was recently caught by researchers on Guam. (Phil Andreozzi/Courtesy of the U.S. National Invasive Species Council) 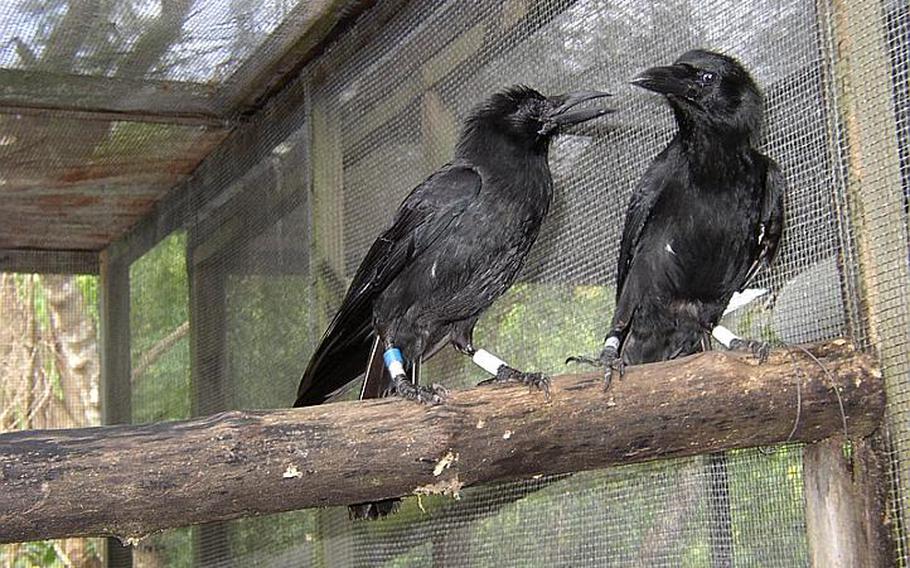 The Marianas crow is now an endangered species due to the brown tree snake on Guam. The bird is bred in captivity in cages lines with small wire mesh to keep out the tenacious snake. (Phil Andreozzi/Courtesy of the U.S. National Invasive Species Council) 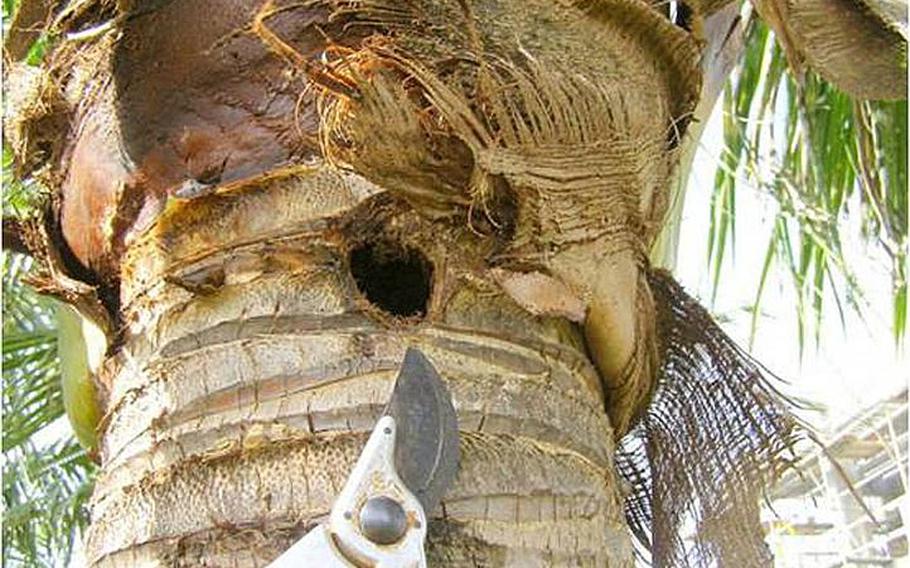 The coconut rhinosaurus beetle showed up on Guam as an invasive species several years ago and has been killing the island&#39;s palm trees -- a mainstay of the tourism industry -- by boring these holes into the trunks. (Phil Andreozzi/Courtesy of the U.S. National Invasive Species Council) 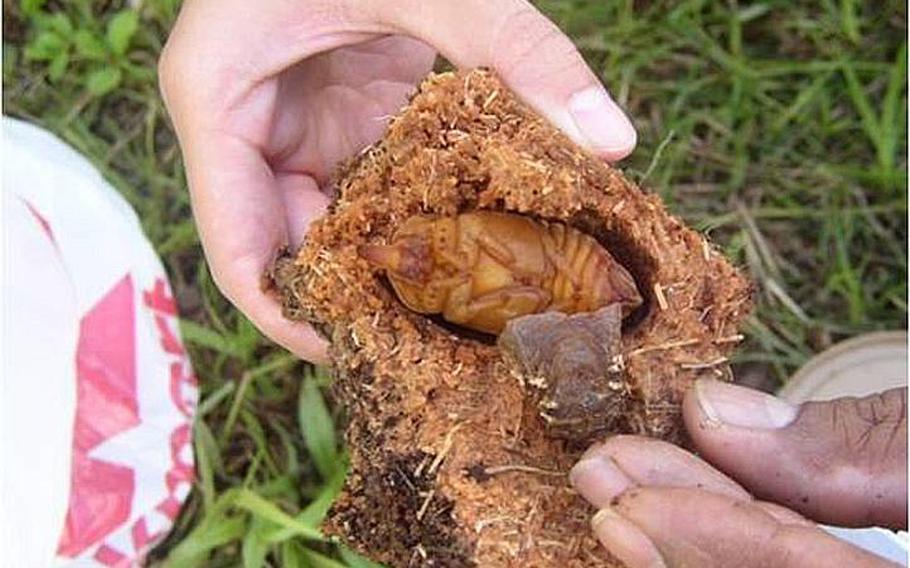 The coconut rhinosaurus beetle showed up on Guam as an invasive species several years ago and has been killing the island&#39;s palm trees -- a mainstay of the tourism industry -- by boring holes into the trunks. (Phil Andreozzi/Courtesy of the U.S. National Invasive Species Council) 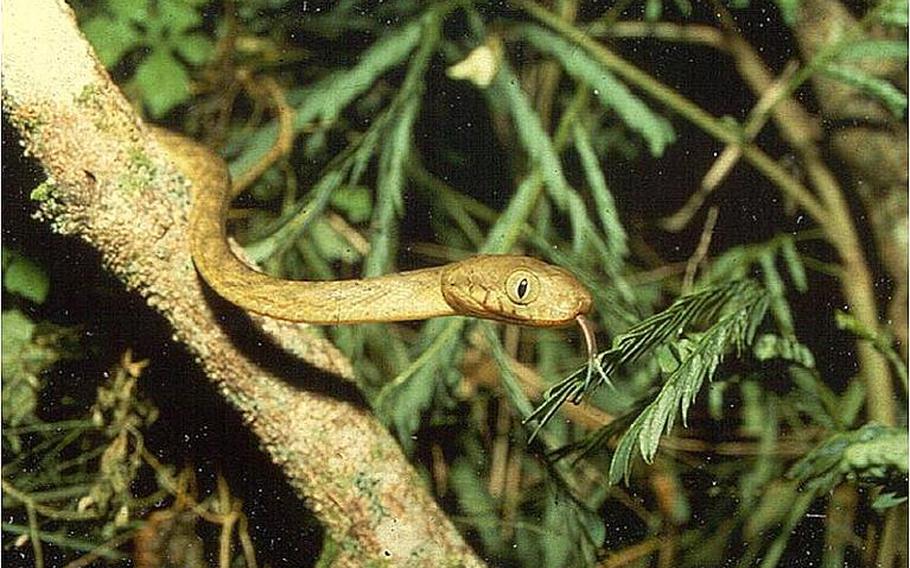 The brown tree snake invaded Guam after World War II and has caused widespread environmental devastation and human aggravation since. Hawaii and other areas of the Pacific are worried a military buildup on the island could unleash the menace on the region. (Dan Vice/Courtesy of the U.S. Department of Agriculture) 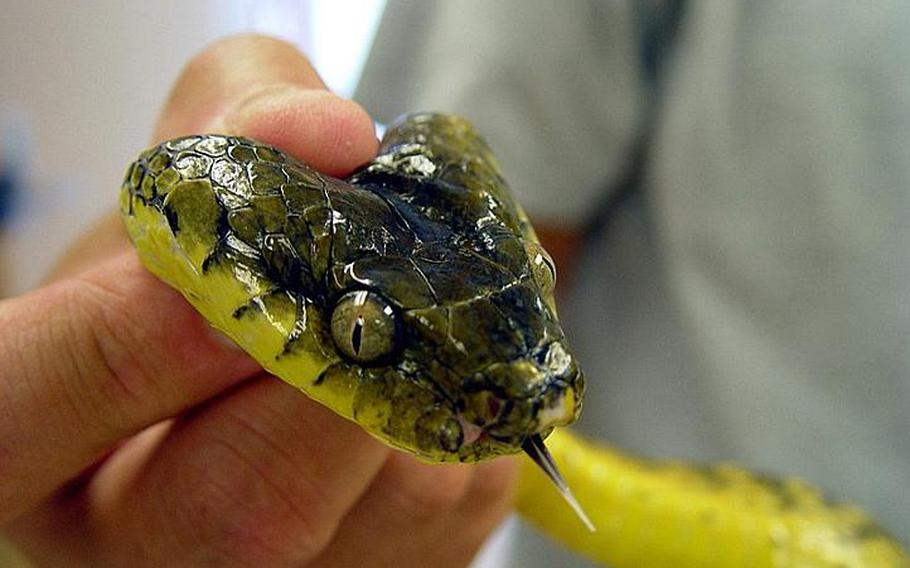 CAMP FOSTER, Okinawa - To say the brown tree snake is a pest on Guam would be an understatement.

Since arriving on the island after World War II - most likely aboard a U.S. military cargo ship - the snake has flourished and devastated the territory's environment, wiping out most native birds and leaving jungles filled with spiders.

It is a constant aggravation for residents. Each year, the venomous snake creeps into beds at night and bites about one in every 1,000 Guamanians, and it crawls into electrical transformers, causing blackouts across the island. In all, the tiny island spends $5 million annually trying to contain and kill off the snake, a desperate effort that has most recently included dropping drugged mice from helicopters as bait.

Now, with a looming U.S. military buildup, there are fears that Guam's snake nightmare could spread to the beaches and jungles of Hawaii.

Experts say a massive movement of materials and workers during a military expansion on Guam - the largest military shift since the brown tree snake was introduced to the territory from New Guinea decades ago - could accidentally import the snake to the Hawaiian islands.

That would potential cause billions of dollars in economic and environmental damages, according to estimates by the U.S. Department of Agriculture.

"All of a sudden, we have a new route coming and it just brings [the brown tree snake] one step closer to Hawaii," said Christy Martin, spokeswoman for the Coordinating Group on Alien Pest Species, which is comprised of government agencies and private groups dealing with invasive species in the state.

Deep concerns in Hawaii and the island nations of Micronesia over the buildup have led the Department of Defense to fund an unprecedented regional bio-security plan aimed at containing the snake and other dangerous pests during the buildup needed to transform the territory into a Marine Corps hub in coming years.

The buildup is playing on years of anxiety in Hawaii.

"About 90 percent of Hawaii residents know about the brown tree snake," Martin said. "If you bring it up in conversation here, the person will say, &lsquo;That is the snake that ate all the birds on Guam.'"

A study released last year by the U.S. Department of Agriculture seemed to confirm the state's worst fears. An incursion by the brown tree snake could cost the state between $594 million to $2.14 billion annually, the agency reported.

Medical treatment would make up part of that cost, because the snakes are poisonous and aggressive. "They have to chew on their prey a little to inject the venom," Martin said. "This would cause most people to go to a doctor or a hospital and seek medical treatment."

Hundreds of millions of dollars also would evaporate because of lost productivity due to electrical blackouts.

But Hawaii's $13 billion annual tourism industry would take the biggest hit, the USDA found by extrapolating recent snake statistics from Guam. The snake would turn off enough visitors to eliminate $137 million to $1.3 billion in tourism each year, meaning the state would shed thousands of jobs, according to the study.

"We asked tourists how likely they would be to spend the same amount of time here" if they had to deal with the brown tree snake, Martin said. "We found out there is a very small amount of people who would stay a few days less. That equates to hundreds of millions of dollars."

The chances of a snake invasion in Hawaii would increase during a military buildup on Guam because of a major uptick in the movement of people, equipment and cargo through the region, said Domingo Cravalho, an invasive species biologist with the U.S. Fish and Wildlife Service on Hawaii.

"Hawaii would be a haven for the brown tree snake," he said. "There is so much natural prey they could feed upon."

The state has already had close calls with the snakes stowing away in airplanes and ships arriving from Guam. Since 1981, eight of the snakes have turned up there, and the last live brown tree snake was caught in a U.S. Army warehouse at Schofield Barracks in central Oahu in 1994, Cravalho said.

Federal agencies monitor nearly all military and civilian vessels and aircraft moving in and out of the Hawaii. But tight budgets in recent years have led to cutbacks in protection programs, including the elimination in 2009 of federal search dogs that were trained to sniff out invasive species such as the brown tree snake in cargo, Cravalho said.

Hawaii is relying on Guam to keep the snake within its borders. "I think it is vital for the program in Guam to remain robust," he said.

Those hopes will depend on the Micronesian Bio-security Plan, a unique effort by the DOD and various federal agencies to protect the region from invasive species during the military buildup, which will bring 8,600 Okinawa Marines, hundreds of tons of building materials and tens of thousands of workers to the territory after 2014.

"Nothing this comprehensive has been tried before ... nobody has ever attempted to study everything at once coming into a region," Phil Andreozzi, special assistant for regional and international affairs at the U.S. National Invasive Species Council.

The plan will pinpoint areas of weak security at Guam's borders where dangerous pests could slip through and will lay out new security measures to patch those holes so the invasive species do not take root on the territory -- or pass through to other Pacific islands.

Researchers with the DOD, USDA, U.S. Geological Survey, the Smithsonian Institute and the National Invasive Species Council are working to complete the bio-security plan as the military buildup looms, but an April deadline was missed and a finished plan is now expected in December, said Lisa Fiedler, the environmental director of the Joint Guam Program Office, which manages the buildup locally on Guam.

"What we are trying to do here is figure out how to prevent the problem from happening in the first place," Fiedler said.

Hawaii is not the only collection of islands in danger. All of Micronesia, which encompasses thousands of islands including Guam, Tinian and Saipan, is at risk because its isolated island ecosystems have evolved with little or no protections against foreign predators such as the brown tree snake.

Once a tenacious pest like the snake takes root, it might never be fully exterminated, Fiedler said.

Guam struggles with snakes and a variety of pests, including a newly arrived beetle that is threatening tourism by killing island palms, and the island cannot afford to fall victim to another invasion, said Roland Quitugua, chairman of the Guam Soil and Water Conservation Districts.

"We need to think of what's going in as well as what is going out," he said. "There will be an estimated 600-percent increase in goods coming our way just during the military buildup."

Quitugua said the territory is working on new security measures as contractors move into place in preparation for the military realignment project.

The DOD should have taken responsibility for its part in the security effort by completing the now-delayed Micronesia Bio-security Plan.

"It is not a matter of if something is going to come in," Quitugua said, "but when it will come in."