Guam man charged with murder in death of US sailor 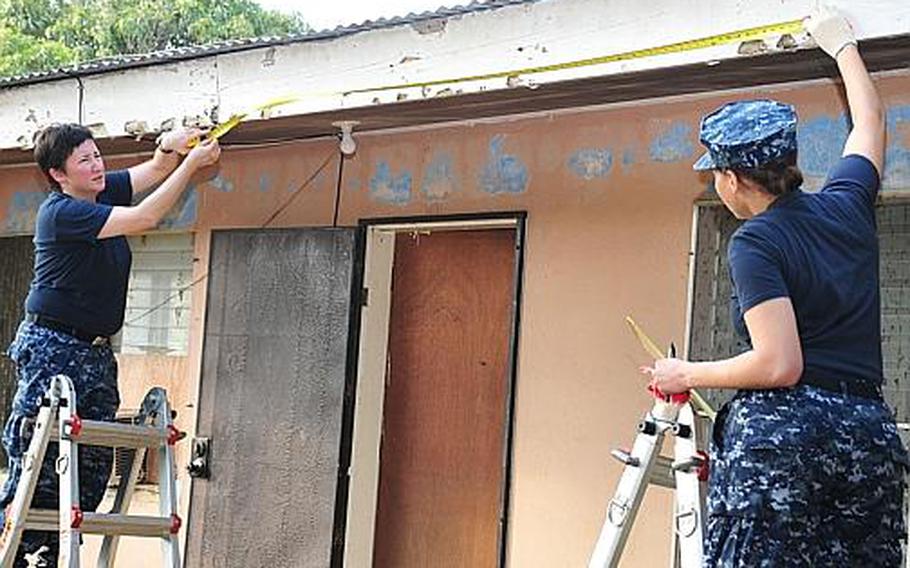 Petty Officers 2nd Class Anna Sterling, left, and Sasha Hutchinson take measurements during a Habitat for Humanity community relations project on Guam in January 2012. Sterling was killed July 23, 2012, when her motorcycle was struck by an allegedly intoxicated driver, who has been charged with murder. (Claire Farin/Courtesy of the U.S. Navy)

CAMP FOSTER, Okinawa &mdash; A Guam man was charged Wednesday with murder following a drunken-driving accident that killed a U.S. sailor, according to documents filed by the Guam attorney general&rsquo;s office.

Endy Timas Timoti, 43, pulled out of an apartment complex in Agat on Monday, crossed over into the oncoming lane and plowed into the motorcycle of a 43-year-old sailor who worked at the Naval Computer and Telecommunications Station, prosecutors charge in the filed complaint, a copy of which was obtained by Stars and Stripes.

Timoti, who is being held on $1 million bail, was charged with murder and 13 other crimes, including manslaughter, vehicular homicide while intoxicated and reckless driving, according to the court documents. He has been convicted of drunken driving twice in the past five years and had a pending felony drunken-driving charge when the collision occurred Monday, according to the documents.

The sailor was identified by the Navy on Wednesday as Petty Officer 2nd Class Anna Sterling. She had been stationed on Guam since 2009, when she started her tour on the island aboard the USS Frank Cable, and had transferred to the communication station in May, the Navy said in a press release.

Sterling &ldquo;was one of the most well liked Sailors at our command. In the time that we knew her, she was never seen with anything less than an optimistic approach and a smile to everything that she did,&rdquo; NCTS Guam Executive Officer Lt. Cmdr. Randal Fuller said in a statement.

Timoti had a blood alcohol content of more than three times the legal limit when police tested him following the fatal collision, according to the complaint. He told officers that he drank six beers before getting behind the wheel.

Earlier Monday, Timoti had attended a court hearing regarding his upcoming felony DUI trial and was warned by the court not to drive, the complaint said.

A witness saw his red hatchback drive out onto the highway and veer into Sterling, trapping her and her motorcycle beneath the car, according to the complaint.

She was rushed to the Guam Naval Hospital but was pronounced dead Monday evening.