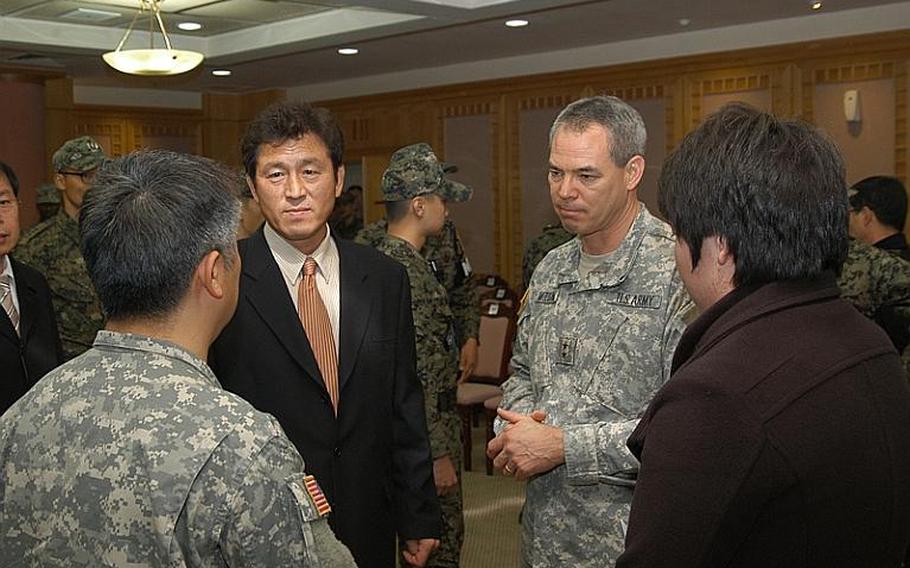 Buy Photo
U.S. Army Maj. Gen. Bert Mizusawa, right, talks Nov. 23, 2011, with Jang Chun Ki after a ceremony marking the 27th anniversary of a 1984 firefight at the Demilitarized Zone. Jang'ss brother, Jang Myung-ki, was killed in the 40-minute standoff between soldiers from North Korea and the United Nations Command. (Jon Rabiroff/Stars and Stripes)

Buy Photo
U.S. Army Maj. Gen. Bert Mizusawa, right, talks Nov. 23, 2011, with Jang Chun Ki after a ceremony marking the 27th anniversary of a 1984 firefight at the Demilitarized Zone. Jang'ss brother, Jang Myung-ki, was killed in the 40-minute standoff between soldiers from North Korea and the United Nations Command. (Jon Rabiroff/Stars and Stripes) 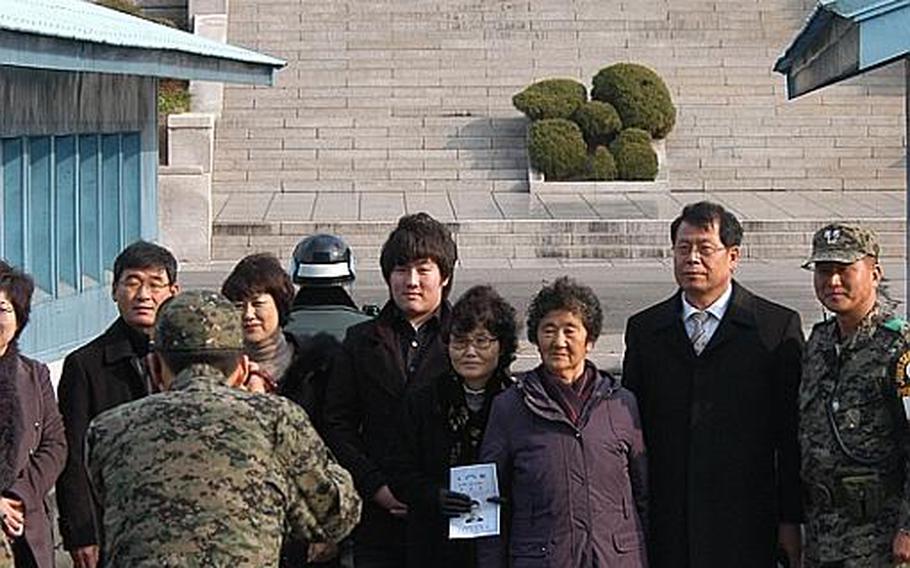 Buy Photo
Members of the family of Cpl. Jang Myunk-ki pose for photos at the Demilitarized Zone in Korea as a North Korean soldier looks on from the other side of the Military Demarcation Line. The family was at the DMZ on Nov. 23, 2011, for a ceremony marking the 27th anniversary of a firefight in which Jang, a Korean augmentee to the U.S. Army, was killed. (Jon Rabiroff/Stars and Stripes) 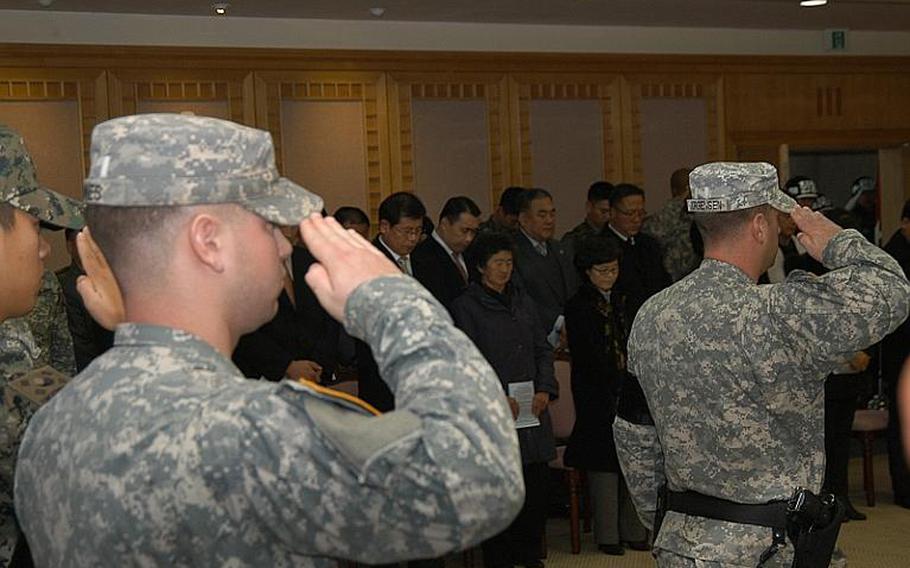 Buy Photo
Family of Cpl. Jang Myung-ki, center, observe a moment of silence Nov. 23, 2011, during a ceremony at Korea's Demilitarized Zone marking the 27th anniversary of a firefight there in which Jang was killed. (Jon Rabiroff/Stars and Stripes) 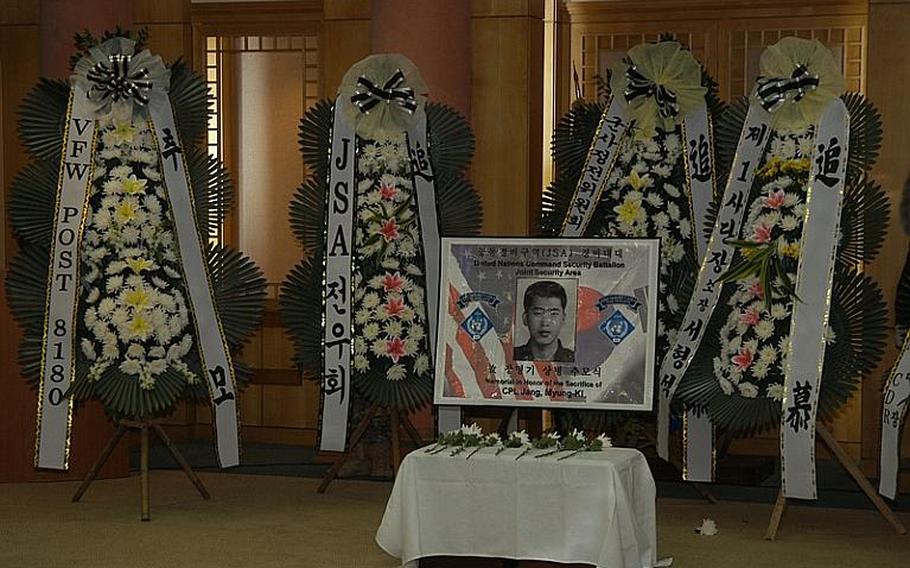 Buy Photo
Flowers surround a photo of Cpl. Jang Myung-ki after a ceremony Nov. 23, 2011, at Korea's Demilitarized Zone marking the 27th anniversary of a firefight there in which Jang was killed. Jang was a Korean augmentee to the U.S. Army. (Jon Rabiroff/Stars and Stripes)

DEMILITARIZED ZONE, Korea &ndash; Maj. Gen. Bert Mizusawa returned to the DMZ on Wednesday to personally thank the family of a soldier killed there in a Thanksgiving Day firefight in 1984.

It was 27 years ago that then-Capt. Mizusawa was on his way to the Joint Security Area dining facility for Thanksgiving dinner when history came calling.

A Soviet citizen, Vasily Matusak, was on a North Korean-sponsored tour of the DMZ on Nov. 23, 1984, when he ran south across the Military Demarcation Line in an effort to defect.

As many as 30 North Koreans followed him across the line, according to United Nations Command Security Battalion records, prompting a deadly firefight and tense 40-minute standoff with the U.N. Command Quick Reaction Force.

A Swiss delegate to the Neutral Nations Supervisory Committee negotiated a cease-fire and a North Korean withdrawal back across the dividing line between the two Koreas, but not before 10 soldiers were killed or wounded.

Five North Koreans were wounded and three killed, including the infamous captain the U.S. Army believes plotted the axe murders of two U.S. officers in 1976 during a tree-trimming operation at the DMZ.

In addition, Cpl. Jang Myung-ki, a South Korean augmentee to the U.S. Army, was killed, and Pfc. Michael Burgoyne was wounded.

The firefight and Jang&rsquo;s death are remembered annually in a ceremony at the DMZ. This year, Mizusawa &ndash; the security company commander at the time of the firefight &ndash; returned to South Korea to speak at the event.

With about a half-dozen members of Jang&rsquo;s family in attendance, Mizusawa praised Jang and Burgoyne for &ldquo;the enduring value of their sacrifice.&rdquo;

&ldquo;The firefight was, in many ways, the last hot battle of the Cold War fought between a Soviet proxy and the U.S.-Korean alliance that was proudly embodied in the bravery and sacrifice of the young two-man team of Jang and Burgoyne,&rdquo; he said. &ldquo;For that, all members past and present of this great unit, and the Jang family, should be &hellip; proud.

&ldquo;While their actions were very brief &hellip; the consequences of their actions I think will earn a significant place in our world history,&rdquo; he continued.

Mizusawa went on to explain that diaries released in recent years suggest that then-President Ronald Reagan was surprised by how the Soviet Union reacted to &ldquo;the unheralded 1984 Soviet defector incident&rdquo; and, as a result, he was inspired to take a &ldquo;hardline stance&rdquo; toward the U.S. adversary which &ldquo;accelerated the demise of the Soviet empire and helped end the Cold War.&rdquo;

&ldquo;This defector incident confirmed to our strong-willed president at the time that he should face down the Soviet leadership,&rdquo; said Mizusawa, who now serves as deputy director for strategic initiatives for the Joint Chiefs of Staff.

&ldquo;I can&rsquo;t tell you about my emotions at the time,&rdquo; she said. &ldquo;I was so shocked. I have been praying to God that nothing like this ever happens again in the future.&rdquo;

Jang Chun Ki, the deceased&rsquo;s brother, said, &ldquo;We come here every year and I always feel like my brother is standing next to me.&rdquo;