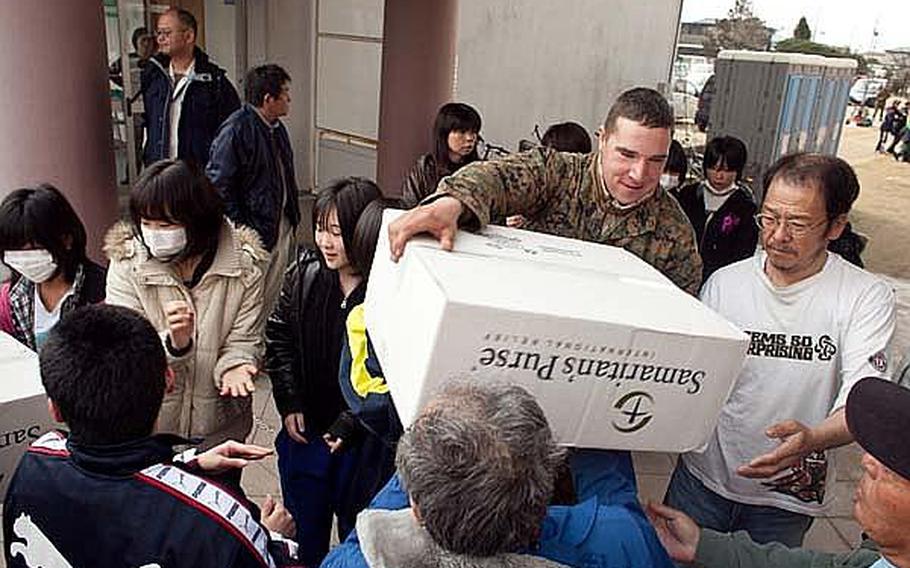 A unit of Marines and soldiers brought aid to a disaster shelter in Watari city March 25. Along with toys, the troops brought toothbrushes, soap and toilet paper. (Nathan A. Bailey/Stars and Stripes)

TOKYO, Japan &mdash; The U.S. military constantly is monitoring radiation levels in Sendai to ensure its troops are not receiving dangerous doses of radiation from the crippled Fukushima Dai-ichi nuclear power plant, the commander of the American military effort said Monday night.

There are no U.S. ground forces operating in the city of Fukushima. Instead, the bulk of U.S. forces are based at Camp Sendai, about 58 miles to the north, just outside the U.S. government-ordered exclusion zone.

&ldquo;We are conducting constant observation and monitoring of all the sites we are working at, and the levels of detected radiation are negligible,&rdquo; Brilakis said during in a telephone interview with Stars and Stripes. &ldquo;We have been very fortunate.&rdquo;

Some parts of northern Japan that are closer to the nuclear plant have recorded levels of contamination, Brilakis said, but radiation levels in the areas where U.S. personnel are working have been barely detectable.

&ldquo;All eyes remain on the condition and future solutions to the issues at the Fukushima reactors,&rdquo; Brilakis said. &ldquo;While that is not part of our mission set, it is one of these things that remain a constant over-riding concern.&rdquo;

In all, there are 1,029 U.S. troops on mainland Japan taking part in the land component of Operation Tomadochi, according to Joint Forces Land Component spokesman 1st Lt. John Norton.

The Americans in Sendai are providing humanitarian relief to some 107,000 people who have been left homeless in the area after the March 11 earthquake. Tens of thousands more are trying to dig out of demolished, mud-caked neighborhoods.

Marines from the 3rd Marine Expeditionary Brigade, who last week reported only a few requests for hands-on help from the Japanese in Sendai, are now regularly engaged in missions in the disaster zone, Brilakis said.

Last week, Marines and soldiers delivered food and water to a shelter in Ishinomaki, one of the first missions in which U.S. troops came face to face with those they were helping.

&ldquo;I&rsquo;m all warm and fuzzy,&rdquo; Army Sgt. David Hertzog said after visiting with the displaced Japanese residents. &ldquo;It took everything to keep my composure. I&rsquo;ll remember this for the rest of my life.

And on Sunday, Marines from the 31st Marine Expeditionary Unit transported power company vehicles to the island of Oshima so workers could restore power cut by the quake.

&ldquo;They also took 10 tons of food and water,&rdquo; Brilakis said, adding that a group of Marines was to arrive on the island Tuesday to do restoration work at a damaged school.

Japanese officials have asked for U.S. military help cleaning up damaged schools in an effort to get them open in April.

&ldquo;We are very committed in helping local communities in that manner,&rdquo; he said.

U.S. personnel also have visited shelters in the Matsushima District and set up shower units for evacuees because many affected areas still lack water, Brilakis said.

Additionally, American personnel are part of a bilateral aid coordination cell, which includes U.S. and Japanese military officers along with representatives from the State Department and U.S. AID. The unit is charged with identifying requirements for support in the relief operation, Brilakis said.

&ldquo;They are identifying uniquely military requirements that we can fill such as distributing relief supplies into affected areas,&rdquo; he said.

The U.S. personnel are enthusiastic about their role in Operation Tomodachi,Brilakis said.

&ldquo;Almost all of us are from bases in Japan,&rdquo; he said. &ldquo;The vast majority call Japan their home. Not only are they doing this for a country that has been a great ally and supporter of the U.S. for a long time, they are doing it for their neighbors.&rdquo;

&ldquo;Those (operations in the Philippines) have been very rewarding, but this is doing it in your backyard,&rdquo; he said.&rdquo; It is a little bit more special for us.&rdquo;

Likewise, the Japan Self-Defense Force personnel have thrown themselves into the relief effort with spirit, he said.

&ldquo;This is a very difficult mission for them,&rdquo; he said. &ldquo;Even today they are still looking for the more than 10,000 missing. They have shown an incredible amount of resilience and effort and care for the people that are laid low by this horrible event.&rdquo;

There is no end is in sight for the U.S. mission, Brilakis said.

&ldquo;I don&rsquo;t know when it will end,&rdquo; he said. &ldquo;Not overnight. I can&rsquo;t tell you now with any definitive answer when this mission can come to a conclusion.&rdquo;

Eventually, there will come a time when the Japanese are comfortable with their ability to handle the situation without U.S. assistance and the U.S. will begin to draw down forces, Brilakis said.

&ldquo;As the host nation overcomes the initial shock, and after the unique U.S. military capabilities are able to be taken on by the host nation, we will turn over what we are doing and return to our home bases and stations,&rdquo; he said.