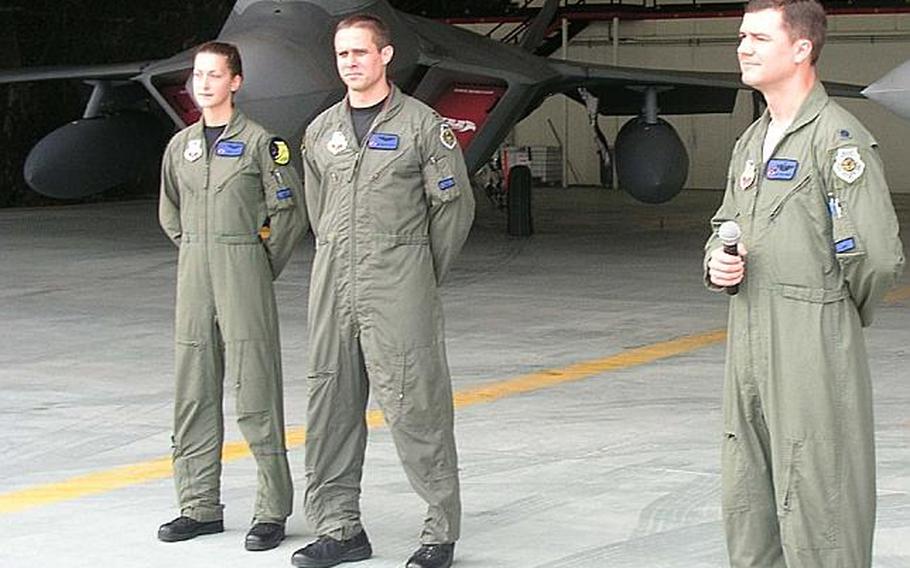 At Osan Air Base in South Korea on Monday, three Air Force pilots who fly the advanced F-22 Raptor fighter answer reporters' questions about the aircraft, two of which are parked behind them. The Raptors will take part in this week's large-scale, naval air exercise that runs Sunday through Wednesday. From left are Maj. Jammie Jamieson, Capt. Brandon Tellez and Lt. Col. Robert Teschner. All are with the 7th Expeditionary Fighter Squadron, of which Teschner is commander. (Franklin Fisher/Stars and Stripe)

With two advanced F-22 Raptor fighters on display in a hangar behind him, Lt. Gen. Jeffrey A. Remington issued the &ldquo;defensive message&rdquo; during a press conference at Osan Air Base as a large-scale show of force exercise entered its second day off South Korea&rsquo;s east coast.

The four-day &ldquo;Invincible Spirit&rdquo; exercise consists of about 20 warships, 8,000 U.S. and South Korean servicemembers, and about 200 warplanes from both countries, officials said.

This week&rsquo;s show of force is &ldquo;defensive in nature and designed to dissuade and deter further provocations from North Korea,&rdquo; he said.

The U.S and South Korea said they&rsquo;re staging the exercise in response to the sinking in March of the South Korean warship Cheonan, which South Korea blames on a North Korean torpedo. North Korea has denied responsibility for the incident, in which 46 South Korean sailors died.

Besides echoing the deterrence theme of other senior U.S. officials in recent days, Remington used the press conference to highlight the role of airpower in the exercise and its potential use in defending South Korea.

Part of the U.S. air arsenal includes bombers, Remington said, noting that some are stationed on Guam.

&ldquo;And we rotate them out here to Korea from time to time as well,&rdquo; he said.

But U.S. officials seemed especially eager to remind North Korea of the presence of the F-22.

The general did this early in his remarks, saying the exercise would see the use of about 200 South Korean and U.S. warplanes, &ldquo;including the F-22 Raptors you see behind us.&rdquo; Until this week&rsquo;s exercise, no F-22s had operated in the Korean theater, officials said.

The Air Force flew the two Raptors from Okinawa, where they&rsquo;ve been on temporary deployment from their home base in New Mexico.

&ldquo;Because the F-22 is in Northeast Asia, we want to make sure we can demonstrate the ability to get it from its current location to any location we might need in the Pacific,&rdquo; he said.

Lt. Col. Robert Teschner, an F-22 pilot who commands the 7th Expeditionary Fighter Squadron, said the Raptor is known for its advanced, high-performance capabilities, including its ability to evade enemy radar.

&ldquo;The F-22, because it&rsquo;s such a leap in technology, it can get places&rdquo; earlier generations of fighters can&rsquo;t, he said.

&ldquo;And it does so without the bad guys being able to detect it,&rdquo; said Teschner. &ldquo;That&rsquo;s what makes it such a lethal fighter. That&rsquo;s what has people talking.&rdquo;