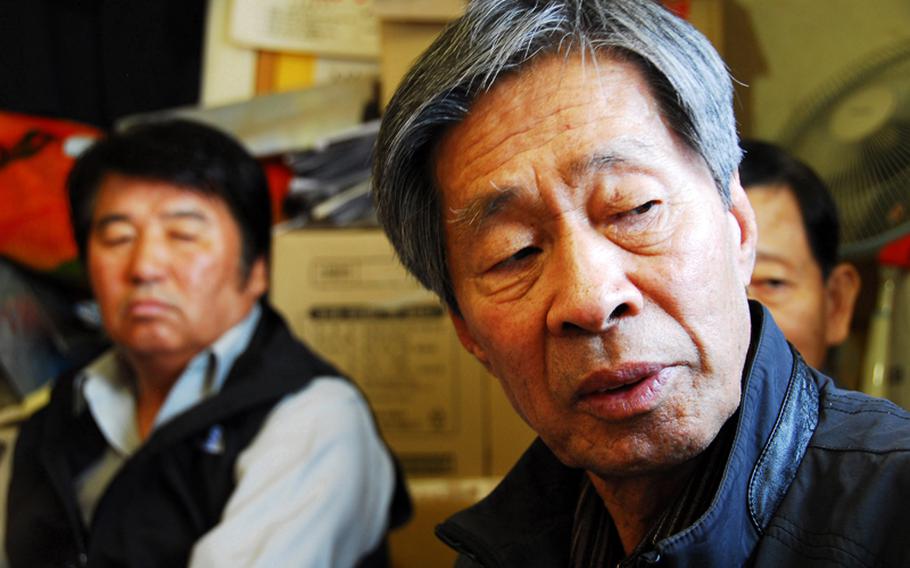 Buy Photo
Jon Chon-bong, 78, sits inside a small building near the entrance of Wolmi Park and talks about the U.S. bombing of hs village on Wolmi Island in 1950. He is one of 44 South Koreans who filed a lawsuit earlier this year seeking compensation for the property their families lost in the bombing. Members of the group take turns sleeping in the building in hopes of attracting attention to their request. Behind him, left, is Jeong Ji-eun, whose father died in the attack. (Ashley Rowland/Stars and Stripes)

Buy Photo
Jon Chon-bong, 78, sits inside a small building near the entrance of Wolmi Park and talks about the U.S. bombing of hs village on Wolmi Island in 1950. He is one of 44 South Koreans who filed a lawsuit earlier this year seeking compensation for the property their families lost in the bombing. Members of the group take turns sleeping in the building in hopes of attracting attention to their request. Behind him, left, is Jeong Ji-eun, whose father died in the attack. (Ashley Rowland/Stars and Stripes) Buy Photo
Im In-ja looks at old aerial photographs of Wolmi Island, which was bombed by the U.S. during the Korean War in the days before the Sept. 1950 Incheon Invasion. Im, 76, is one of nearly four dozen South Koreans suing South Korea, the city of Incheon, the U.S. and the United Nations for compensation of damages to their families&#39; property during the bombings. (Ashley Rowland/Stars and Stripes) 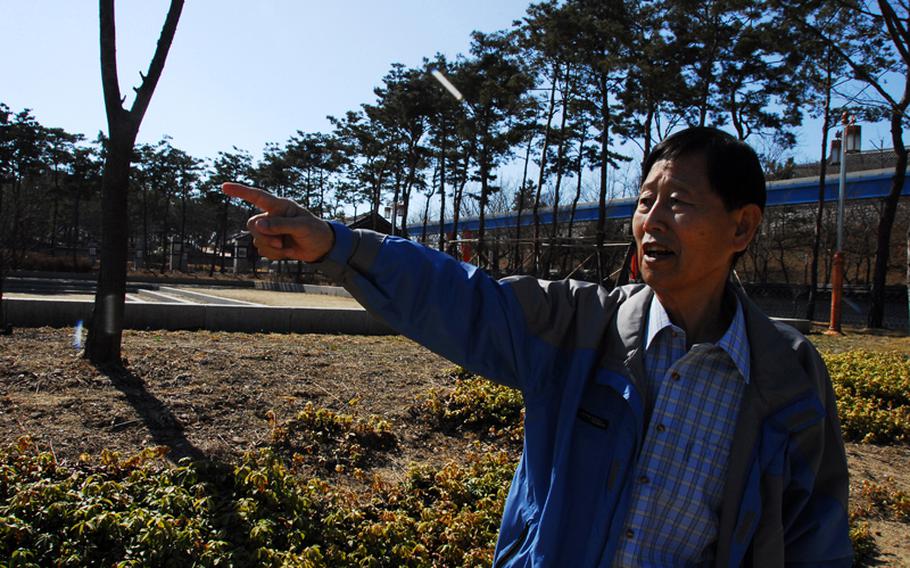 Buy Photo
Jang Seok Ju, 73, points to the area where his family used to live in what was then a village on Wolmi Island. The area, bombed by U.S. troops in the days before the Sept. 15, 1950, Incheon Landing, is now a park. "My heart is broken," he said. (Ashley Rowland/Stars and Stripes) Buy Photo
Pedestrians stroll through Wolmi Park, located on an island taken over by North Korean troops in the early days of the Korean War and heavily bombed by U.S. forces in September, 1950. (Ashley Rowland/Stars and Stripes) 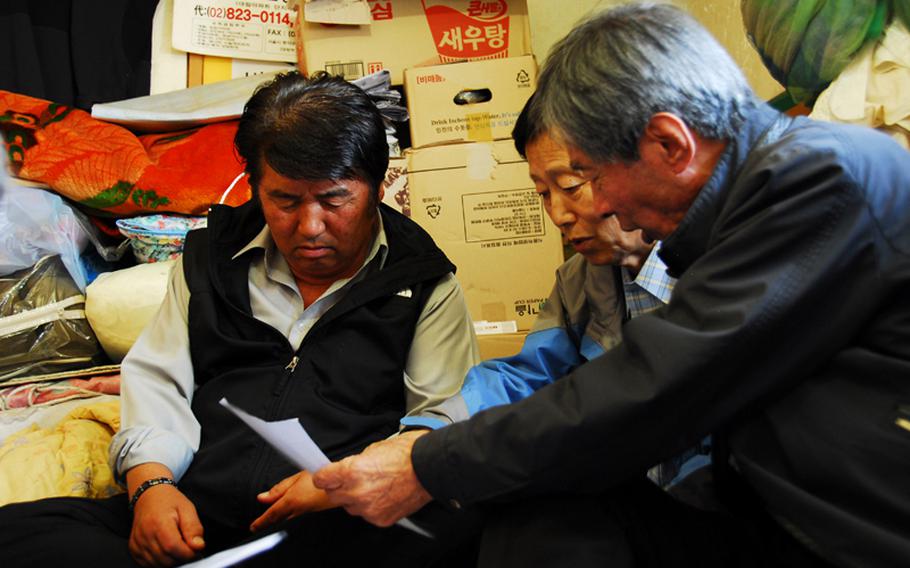 Buy Photo
(from left to right) Jeong Ji-eun, Jang Seok Ju and Jon Chon-bong look at old aerial photographs of Wolmi Island, where they lived before the U.S. bombed the island in September 1950 to rid it of North Korean troops. The men are part of a group of former Wolmi Island residents suing the city of Incheon, South Korea, the United States and the United Nations for damages caused to their families&#39; property during the bombings. (Ashley Rowland/Stars and Stripes) 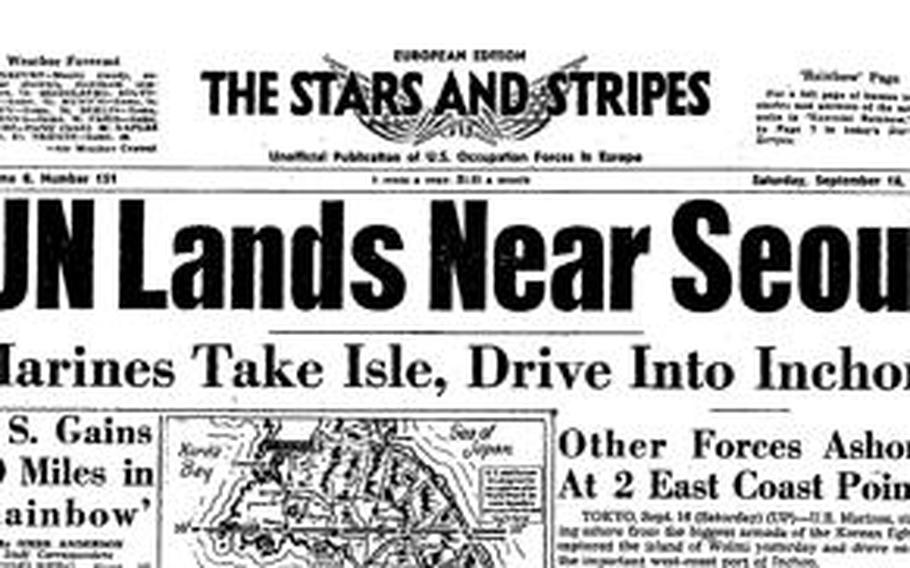 Buy Photo
September 16, 1950 headline on the capture of Wolmi island. (Stars and Stripes) 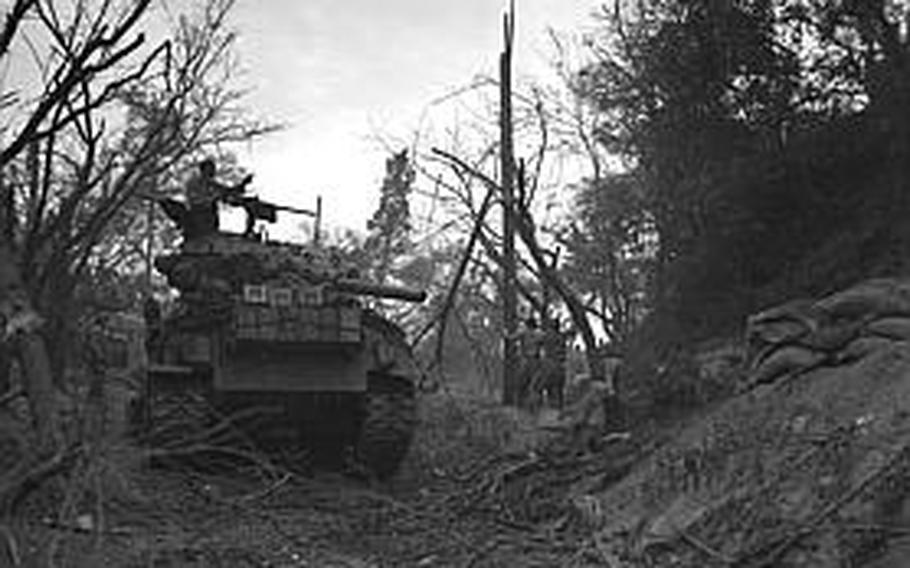 Tank-led U.S. Marines accept the surrender of the enemy on Wolmi Island as the tank commander points out another pillbox. (Sgt. Frank Kerr, 1st MarDiv) 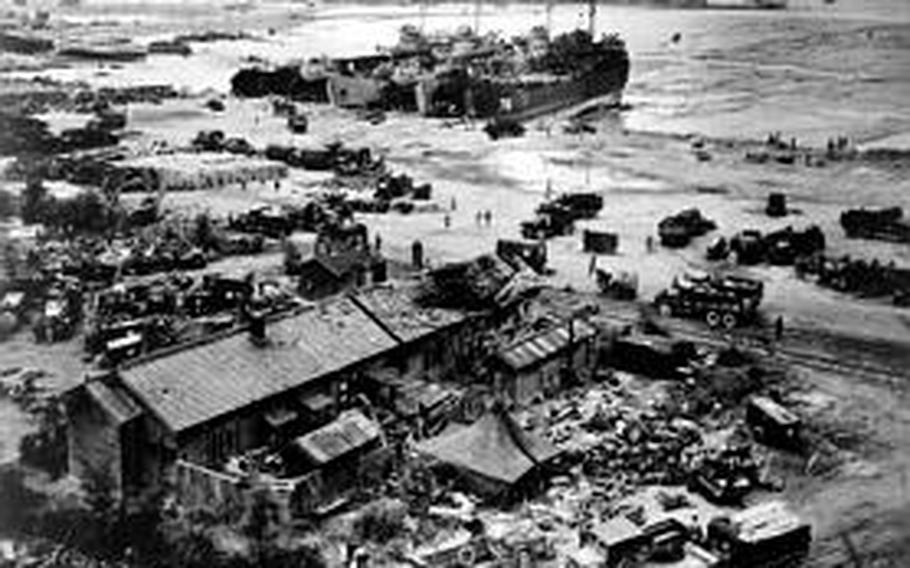 INCHEON, South Korea - Every September, thousands of U.S. and South Korean troops and veterans gather at this port city for pomp-filled ceremonies, speeches and even re-enactments, marking the anniversary of the Incheon Landing, a daring amphibious assault that became the turning point in the Korean War.

But not Jeong Ji-eun, a quiet 68-year-old taxi driver whose father was killed when U.S. pilots strafed their village on Wolmi Island in the days before the Sept. 15, 1950, attack, hoping to clear out the North Korean forces embedded there.

The U.S. believed the attack on the island, which had been taken over by some 400 North Korean troops, was critical to the success of the invasion a few days later. Had the Incheon Landing not succeeded, some historians believe that U.N. forces could have lost the war.

More than 60 years later, Jeong and 160 others who used to live on Wolmi Island are suing the South Korean government for compensation for property their families lost in the bombing.

Also named in the lawsuit are the city of Incheon, whose boundaries include the island; the United States; and the United Nations, which oversaw the international coalition that fought the North Koreans and Chinese forces.

The lawsuit, filed in Incheon District Court in February, asks that about $2,750 be awarded to each of the 44 households represented in the suit, though some islanders say they might ask for more.

The group&rsquo;s members, many of whom fled Wolmi in the days before the bombing, say their case is different from those of other South Koreans who were affected by the war because they were never allowed to move back to their village. The small, wooded island &mdash; then home to a village of about 600 people &mdash; is separated from the mainland by a narrow channel.

They say the U.S. bulldozed the homes left standing on Wolmi soon after the bombing to make way for a U.S. military base. The island later became a South Korea naval base that was eventually closed and turned into a park.

Many never recovered the bodies of the dead, including Jeong, who believes his father&rsquo;s body is buried underneath the broad sidewalks and grassy lawns of Wolmi Park.

His father, then a 35-year-old fishing captain, packed up his young family when he heard rumors that the North Koreans were coming, and moved them to a neighboring village off Wolmi. He went back to the island alone several weeks later to pick up food and supplies. There, he was likely captured by North Korean troops and forced to work alongside other islanders building strongholds for the North, Jeong said.

Then came the U.S. bombing.

The next day, Jeong&rsquo;s mother returned to the island and found her husband&rsquo;s body buried under rubble, and wrapped it a straw mat before U.S. troops forced her to leave. She was not allowed to return, and the family never learned what happened to his body.

&ldquo;My father must be buried somewhere here,&rdquo; Jeong said, tears rolling down his cheeks as he looked across the park. &ldquo;I feel I have not done the right thing as a son, but there is nothing I can do.&rdquo;

The bombing of Wolmi Island came three months after North Korean troops invaded the South and quickly overran the unprepared U.S. and South Korean troops. By September, the North controlled the entire peninsula except for the southeastern city of Pusan, which is now spelled &ldquo;Busan.&rdquo; The U.S.-led invasion of Incheon, military officials hoped, would open a second major front against the North Koreans and ease pressure on U.N. forces near Pusan.

But first, the U.S. had to secure Wolmi.

&ldquo;Failure will seriously jeopardize or even prevent the major assault on Incheon,&rdquo; Rear Adm. James Doyle, a task force commander, said in an order issued before the attack on Wolmi, according to a Stars and Stripes article from Sept. 17, 1950. &ldquo;Therefore, press the assault with the utmost vigor despite loss or difficulty.&rdquo;

The U.S. assault on Wolmi, which began Sept. 10 and continued for several days, wiped out the North Korean troops. But at least 100 civilians, and likely more, were killed, according to a now-disbanded South Korean government commission that investigated the attack in 2008.

An Incheon city official said the national government is responsible for compensating the islanders, not the city. The Ministry of National Defense said there are no laws that would allow it to compensate the residents.

The Truth and Reconciliation Commission, set up to investigate wartime atrocities and wrongs committed by the government against its citizens, ruled that the U.S. had failed to warn residents of the impending attack. Despite clear weather, U.S. pilots dropped napalm bombs and strafed women, children and the elderly in open areas, it found.

Kim Dong-choon, a former head researcher for the TRC, said the U.S. never responded to the commission&rsquo;s findings.

The commission recommended that South Korea and the U.S. compensate the islanders and support their efforts for a homecoming and to memorialize the dead. But the group says it has received nothing since the commission&rsquo;s ruling, despite repeated requests for compensation or to move back to the island.

&ldquo;We went to every government organization, but no law exists that applies to us,&rdquo; said Han In-duk, 68, who heads the group involved in the lawsuit. &ldquo;I feel like we are not South Koreans, but foreigners.&rdquo;

Members of the group have kept vigil near the park every night for more than six years, taking turns sleeping in a narrow wooden shack stocked with bedding, a television, electric stove and refrigerator, near the park&rsquo;s entrance in hopes of gaining the city&rsquo;s &mdash; and the public&rsquo;s &mdash; attention.

She said the group sent U.S. President Barack Obama a letter in 2009 that asked for an apology and included the TRC&rsquo;s recommendations, but received no response.

The group&rsquo;s members want to move back to the island, and would be content to live in a corner of the park, Han said. If they can&rsquo;t have that, they want reimbursement in the form of apartments, houses or money, she said.

An attorney for the group say it was decided to sue this year because of a deadline imposed by South Korean law, which says lawsuits can be filed no later than three years after someone learns a law has been broken. In the Wolmi case, the three-year window began when the Truth Commission issued its recommendations in early 2008.

An Incheon city official said the national government is responsible for compensating the islanders, not the city. The Ministry of National Defense said there are no laws that would allow it to compensate the residents.

The islanders have little chance of winning the lawsuit, in part because South Korea is reluctant to ask the U.S. to intervene for fear of angering its ally, said Kim Dong-choon, a former head researcher for the TRC.

&ldquo;The South Korean government sees the Wolmi bombing as an unavoidable part of war, so the U.S. view would be almost the same as South Korea&rsquo;s,&rdquo; he said.

Many islanders believe the invasion of Incheon was necessary to save their country, but have conflicting feelings about the Wolmi bombing. They say that the U.S. should have been more careful not to hit civilians and allowed the survivors to return to their villages.

&ldquo;How dare the pilots fire on grandmothers and children with machine guns?&rdquo; said Im In-ja, who was 16 at the time of the bombing and watched it from a neighboring island. Most of her family remained on Wolmi during the bombing, she said, dodging fire from planes so close to the ground they could see the pilots.

She believes the U.S. intentionally burned the villagers&rsquo; houses that withstood the bombing to make way for their base. &ldquo;The U.S. cares only about its people,&rdquo; she said.

Jang Seok Ju says he is not angry at the U.S. or Gen. Douglas MacArthur, the architect of the Incheon invasion, for bombing Wolmi, but at South Korea for ignoring the islanders&rsquo; requests for compensation.