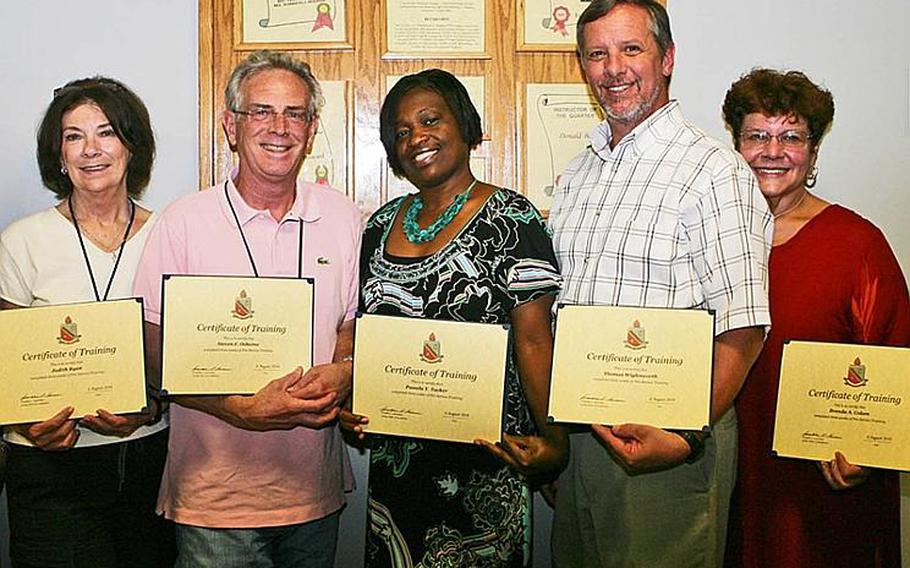 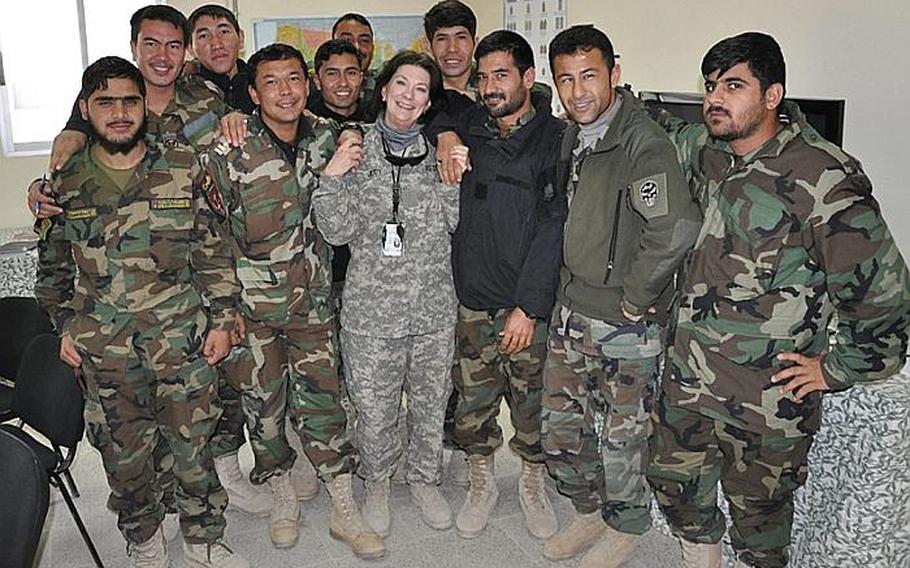 Judy Ryan, a teacher from the Fort Knox Community Schools in Kentucky, poses with Afghan security forces personnel she teaches English to in Afghanistan. (Courtesy of Judy Ryan) 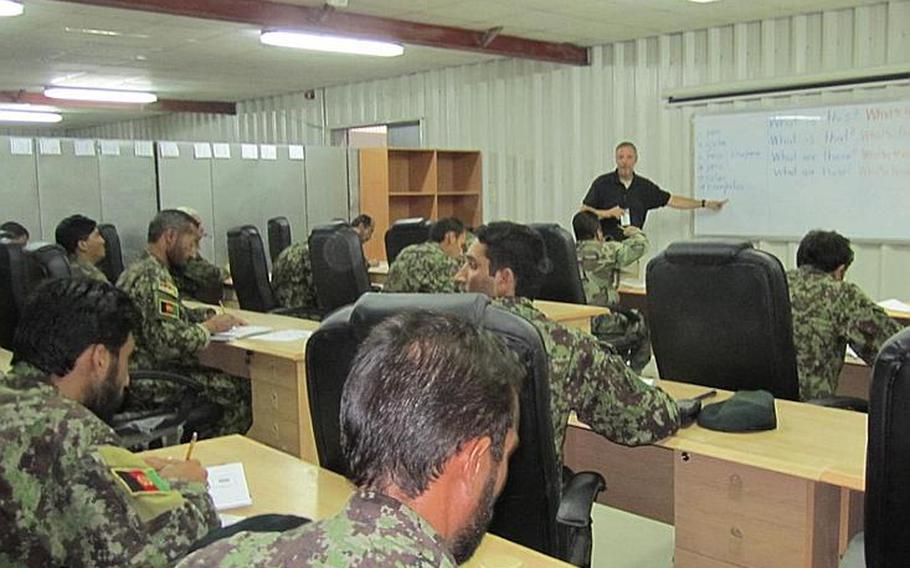 Thomas Wiglesworth, who normally teaches at Andersen Elementary School on Guam, instructs a class of Afghan security forces in Kandahar, Afghanistan, during a September class. (Courtesy of Thomas Wiglesworth) 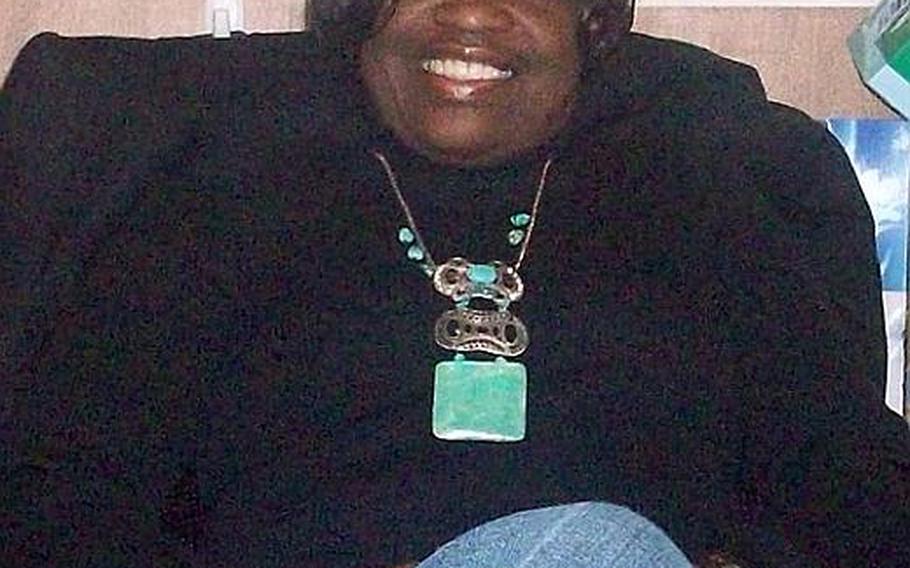 Pamela Tucker, a teacher from Misawa Air Base, Japan, is leading a mobile training team that teaches English to security forces personnel in Afghanistan. (Courtesy of Pamela Tucker)

MISAWA AIR BASE, Japan -- When Pamela Tucker last deployed to Iraq, she wore a uniform and carried a weapon. On her current deployment to Afghanistan, she&rsquo;s armed only with the language course curriculum that she uses to teach Afghans English.

She says it&rsquo;s a difficult and daunting task, but that she volunteered &ldquo;because it will empower them to be able to communicate globally ... and it puts them in a better position to defend themselves and to take care of their country.&rdquo;

Tucker&rsquo;s Mobile Training Team &mdash; including four other DODEA teachers and nine Defense Language Institute employees &mdash; is augmented by about 50 Afghan instructors. They run language courses at five sites across the country &ndash; including Kabul and Kandahar &ndash; and are looking to add three additional sites in the near future. The team is part of the NATO Training Mission-Afghanistan&rsquo;s Education Division, tasked with providing English instruction to Afghan security forces with a 70 percent rate of illiteracy.

Though Tucker&rsquo;s a staff sergeant in the Army Reserve, she&rsquo;s in Afghanistan in a strictly civilian role. Her military background and two deployments to Iraq meant she had a pretty good idea of what to expect in terms of living conditions during her yearlong volunteer assignment.

&ldquo;The environment is very austere and you have to be prepared for that ... so it takes someone who is both physically and mentally tough,&rdquo; she said during a phone interview.

Steve Osborne, a teacher from Naples High School, Italy, said he volunteered because he&rsquo;s getting ready to retire after 30 years and &ldquo;wanted to end my career with an adventure.&rdquo;

Osborne called the deployment the most challenging, yet rewarding, teaching experience of his career.

&ldquo;I feel like I am really accomplishing something of value; establishing a lasting line between these young Afghans and Americans,&rdquo; Osborne wrote in an e-mail. &ldquo;Though they admit to the difficult political and military situation at the moment they are very optimistic about the future of the country.&rdquo;

Judy Ryan, from the Fort Knox Community Schools in Kentucky, is now teaching at a small, remote camp high in the mountains of Afghanistan, surrounded by a commando training camp.

&ldquo;I have taught in four other countries and have always adored my students,&rdquo; Ryan wrote in an e-mail from Afghanistan. &ldquo;But with these students, I know how critically important it is for them to learn English and watching them succeed in this effort is beyond any teacher&rsquo;s dreams for her students.&rdquo;

Thomas Wiglesworth, who normally teaches at Andersen Elementary School on Guam, is working in Kandahar, home to &ldquo;frequent rocket attacks.&rdquo;

Wiglesworth said he hears success reports from American advisers who say the Afghans are &ldquo;motivated by the English classes&rdquo; and are &ldquo;using the language more frequently.&rdquo;

He said he would highly recommend the duty to other teachers.

&ldquo;I have done few things in my life that have provided such a great sense of pride and contribution this opportunity has provided,&rdquo; he said in an e-mail. &ldquo;The Afghan soldiers, many who have lost parents and loved ones to the Taliban, deeply love their country and want to see freedom established.&rdquo;

As team leader, Tucker visits all the sites, some of which have limited resources.

&ldquo;You just have to resort to grass-roots teaching,&rdquo; she said. &ldquo;You have to teach in a manner that can get the lesson across without the added support technology.&rdquo;

Marilee Fitzgerald, the acting director of DODEA, said the teachers who deploy are &ldquo;high performing ... ready and available to step in and assume the instructional responsibilities.&rdquo;

&ldquo;We look at their service in Afghanistan not as a loss, but as an opportunity for them to expand their horizons and bring back some of what they learn to their classrooms,&rdquo; Fitzgerald wrote in an e-mail.

&ldquo;I would just say that this is a daunting and challenging experience,&rdquo; she said. &ldquo;But I believe wholeheartedly in the U.S. mission and I feel fortunate to have a chance to lend to this process.&rdquo;