Commissary major quality-of-life improvement at small base in Korea 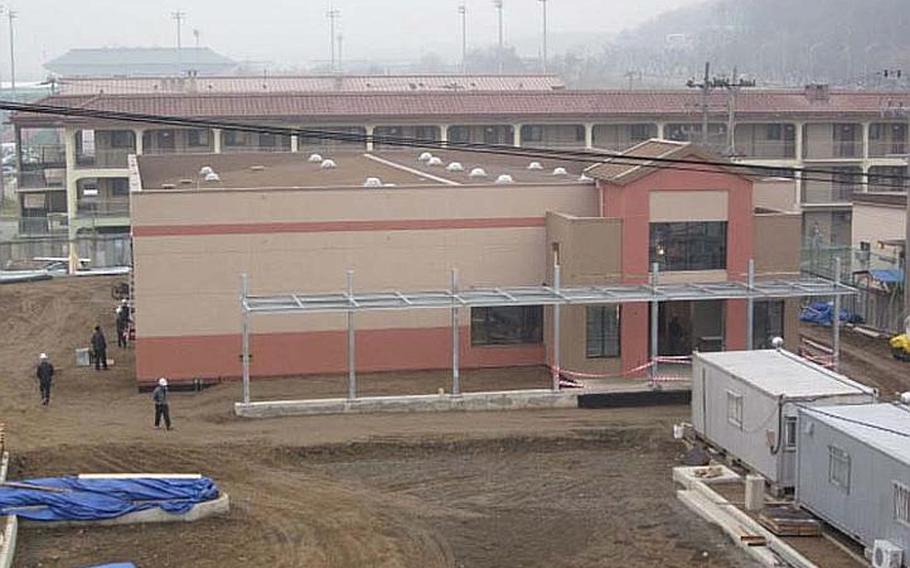 This December 2011 photo shows the under-construction commissary at K-16 Air Base, which will officially open on May 17, 2012. Until now, the approximately 900 troops stationed at K-16 have had to travel an hour to the nearest commissary at U.S. Army Garrison Yongsan. (Courtesy of the U.S. Army)

SEOUL &mdash; For the nearly 900 troops stationed at K-16 Air Base, buying groceries has been a logistical headache, since the nearest commissary is located 45 minutes to an hour away at U.S. Army Garrison Yongsan.

And because many servicemembers aren&rsquo;t allowed to own cars in South Korea &mdash; particularly junior enlisted troops who make up a sizable portion of the population at K-16 &mdash; it&rsquo;s also been a drain on the wallet, costing nearly $20 for a one-way taxi trip to Yongsan.

On Thursday, a long-awaited commissary will open at K-16, with more than 4,500 items in stock and two regular checkout lanes.

The new commissary has been a major cause for celebration at the base.

&ldquo;It&rsquo;s been, make do with what&rsquo;s at the PX, which is microwave food, no veggies, no produce or no real meat. Nothing like that,&rdquo; said Spc. Rachel Pellicer, K-16 Better Opportunities for Single Soldiers president.

K-16, also known as Seoul Air Base, has a community activities center with several fast-food outlets, but &ldquo;after two years of being here and eating Pizza Hut, you get pretty OD&rsquo;ed,&rdquo; she said.

Defense Commissary Agency spokeswoman Nancy O&rsquo;Nell said the 3,585-square-foot commissary is a &ldquo;quality-of-life enhancement&rdquo; for troops at K-16 and nearby Command Post Tango.

The commissary will serve approximately 1,400 shoppers, including servicemembers, retirees, Department of Defense civilian employees and family members, according to DeCA. Construction on the $3.4 million, South Korea-funded project was completed last month.

K-16 will remain open after most bases in and north of Seoul close later this decade as part of a long-planned relocation of those troops to Camp Humphreys in Pyeongtaek. After Yongsan closes, the population of K-16 is expected to grow by 60 percent to slightly more than 1,650 personnel, Yongsan spokeswoman Jane Lee said.

K-16 is located on the outskirts of Seoul, but it&rsquo;s a world away from Yongsan, the flagship U.S. military installation in South Korea, and its relatively posh &ndash; for South Korea &ndash; commissary with a sushi bar, deli, bakery and aisles stocked with fresh produce and dairy products.

And on a bad traffic day, the approximately 12 miles from K-16 to Yongsan may feel more like 200.

Troops can take the shuttle bus that runs between the two bases.

&ldquo;If you want to buy groceries for the week or two weeks, that&rsquo;s a lot of stuff to put on the bus,&rdquo; Pellicer said.

Instead, most people &ldquo;break down and pay for a cab, just because it&rsquo;s easier,&rdquo; she said.

Even the trip to the nearest E-Mart, a popular chain store similar to Wal-Mart, costs between 7,000 and 8,000 won, the equivalent of $6 to $7. Some taxi drivers refuse to make the trip because it&rsquo;s too short, or, because they don&rsquo;t speak English, have trouble following directions to the base.

Pellicer said she plans to clean out her refrigerator in anticipation of her first shopping trip to the new commissary.

&ldquo;Almost every different group of people I talk to throughout the day, someone brings up the commissary and how excited they are,&rdquo; she said. &ldquo;We hope that they overstock it the first weekend.&rdquo;