Base schools adjust as students return to Japan 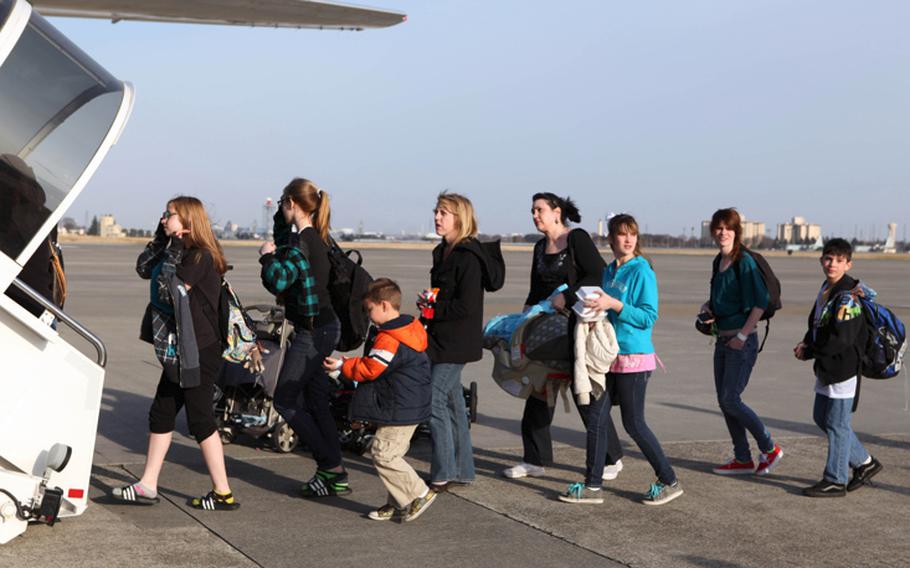 Buy Photo
U.S. military family members board a flight from Yokota Air Base, Japan, to Seattle on March 19. (Grant Okubo/Stars and Stripes)

TOKYO &mdash; Teachers are providing tutoring after hours, during weekends and study periods to help some of the thousands of students returning from safe havens to catch up on the work they missed.

Attendance at base schools in Japan, which dropped nearly 4,000 following the March 11 earthquake and tsunami, was still down by 2,700 students on Thursday.

Students who have returned are being evaluated to see if, or how much, they have fallen behind during their time away, Department of Defense Education Activity Pacific spokesman Charly Hoff said.

&ldquo;We are going to look at their student records that they are bringing back and any grades or work samples,&rdquo; he said. &ldquo;It&rsquo;s going to be child-by-child and case-by-case.&rdquo;

Students and their families will meet school administrators, guidance counselors and teachers to make sure there are no &ldquo;learning gaps,&rdquo; Hoff said.

Yokota High School principal Darrell Mood said Thursday that a steady flow of students had been returning to the school this week. On Thursday, 33 students from the high school had yet to return. At one point during the crisis, attendance had dropped by 120 students, he said.

&ldquo;The key thing is making sure the students get caught up with their classes and trying to assess where they stand with regards to how much work they did at their safe haven school,&rdquo; he said.

Mood estimated that only one-half of the students who left enrolled in safe haven schools.

Teachers will look at how much work students accomplished at safe haven or online schools and how much homework they completed during the break, he said.

At Yokota High School, he said, every staff member stayed during the crisis and now many are working late to help kids catch up.

For example, teachers are running Saturday classes and staying after school to work with students. Catch-up sessions are also being run during scheduled study periods at the school, he said.

The school also is working hard to get returning students back into extracurricular activities.

&ldquo;Tonight we have a band concert,&rdquo; he said. &ldquo;Some of the students got back yesterday and started working on their pieces so they could be ready.&rdquo;

Eighth-grader Kristi Coleman, 14, who returned to Yokota Middle School after three weeks in Hawaii, said she spent the break visiting relatives and shopping, although she did do some homework.

In contrast, Obediah Blair, a sophomore at Yokota High School who went to Florida last month, said he enrolled in another school for just under a month.

&ldquo;I was the new kid there and only had a couple of friends, and the school was very big,&rdquo; he said.

Tiffany Burroughs, an eighth-grader who continued to attend school at Yokota after the earthquake, said she had more time with her teachers over the past month. But, she said, &ldquo;It got really quiet at school with my classmates gone.&rdquo;

Tiffany, 14, said she was happy to see the return of familiar faces but added: &ldquo;I didn&rsquo;t feel people needed to go.&rdquo;

Senior Leimaris Cruz, who also stayed behind, said she understood that many parents thought their kids should leave.

Sisters Amy and Christina Raymond, freshmen who spent just under a month at school in Colorado, said teachers have helped with the transition back.

&ldquo;A lot of the teachers emailed us our assignments so we could stay on track,&rdquo; Christina said. &ldquo;So it&rsquo;s not that hard.&rdquo;

However, Amy said academics are not the hardest part of the transition. For her, the hard part was saying goodbye to her friends in Japan and then having to say goodbye again to friends she made at her school in Colorado.