Zama's Encarnacion was tough to bring down 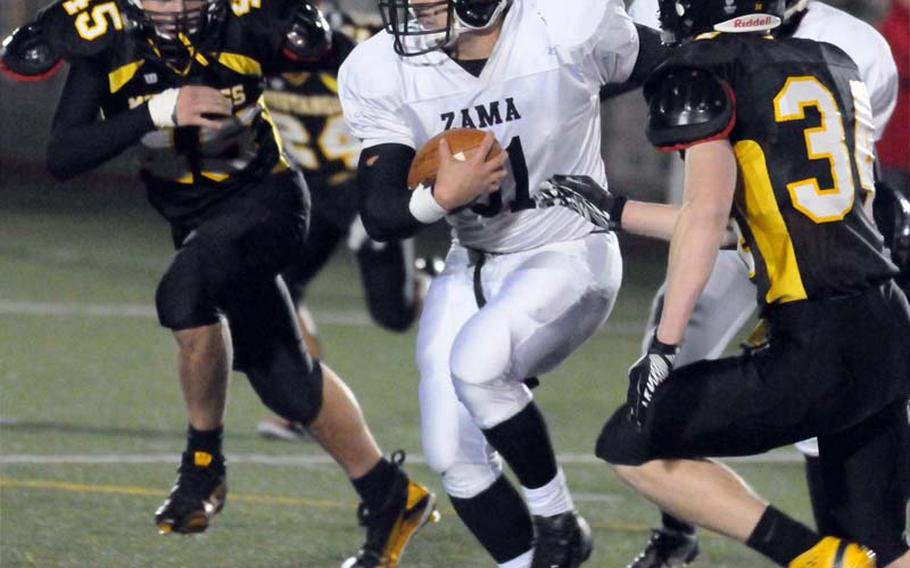 Every now and then, a player comes along who is so synonymous with the success of a football team that he virtually becomes that program&rsquo;s cornerstone for however long he&rsquo;s there.

Zama American football has had a long line of them, the latest being senior fullback-linebacker Andre Encarnacion, who departs the program as the Trojans&rsquo; career leader in touchdowns (37) and yardage (2,732) on 380 carries over three seasons on varsity.

&ldquo;Whenever we needed a good, power run, if it&rsquo;s going to be got, he would go get it,&rdquo; said sixth-year coach Steven Merrell of a Trojans program that has featured Encarnacion and Michael Spencer before him in recent years.

During the three seasons with No. 31 in the backfield, Zama has gone 14-16 overall, playing against mostly Division I opposition in the DODDS Japan and Kanto Plain Association of Secondary Schools leagues.

But solely against Division II opponents, Zama&rsquo;s gone 9-2 with Encarnacion in the lineup, including a 5-0 ledger in the just-completed 2012 season, the first one in which all division opponents played each other at least once to determine title-game berth space.

After dispatching two-time defending champion Daegu 45-12 at Zama on Sept. 8, then Osan American 19-2 the next week in Korea, Zama faced Robert D. Edgren twice in the regular season, then again in the title game, and won all three by a combined 52 points.

Through it all, Encarnacion gained a division-best 1,349 yards and scored a Pacific-best 19 touchdowns, leading the region for the second straight season.

It wasn&rsquo;t so much the yards he gained as how he gained them, Merrell said. &ldquo;It&rsquo;s amazing how he carries five guys with him. You shake your head sometimes. You can&rsquo;t believe it.&rdquo;

But for his size - 5 feet, 11 inches and 190 pounds - Encarnacion was also blessed with &ldquo;quickness, agility and speed,&rdquo; Merrell said. &ldquo;It&rsquo;s certainly impressive to watch a kid like that run.&rdquo;

Together with his fellow graduating backfield mate Mitchell Harrison, Encarnacion and the Trojans appeared in three straight D-II title games, losing twice to Daegu before capping their careers with a 35-20 home win over Edgren for the D-II championship.

&ldquo;He&rsquo;s definitely a big loss for our program,&rdquo; Merrell said of Encarnacion.