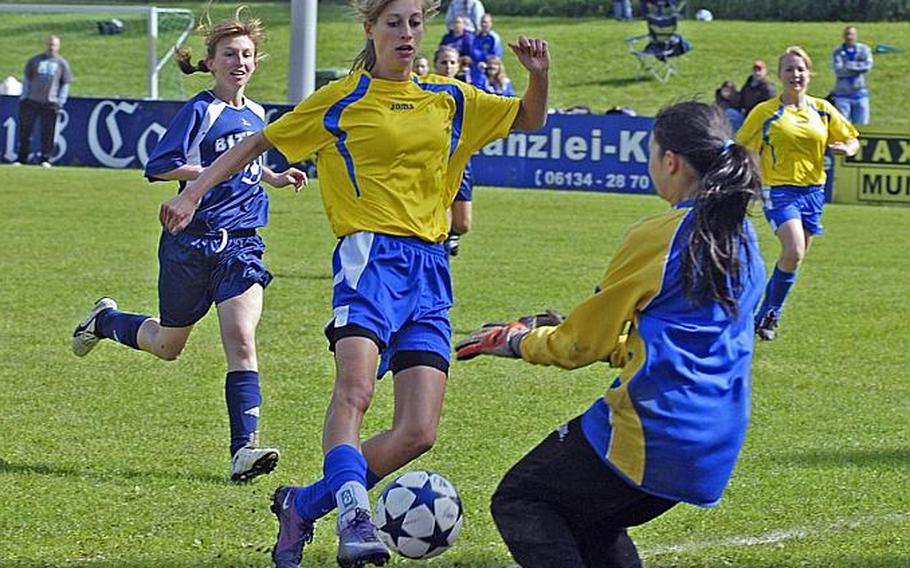 Wiesbaden junior Meghan Smith drives to the goal as Bitburg sophomore keeper Isabella Madamba positions herself for the save. The host Wiesbaden girls squad blanked Bitburg on Saturday, 4-0. (Mark Patton/Stars and Stripes)

Wiesbaden junior Meghan Smith drives to the goal as Bitburg sophomore keeper Isabella Madamba positions herself for the save. The host Wiesbaden girls squad blanked Bitburg on Saturday, 4-0. (Mark Patton/Stars and Stripes) 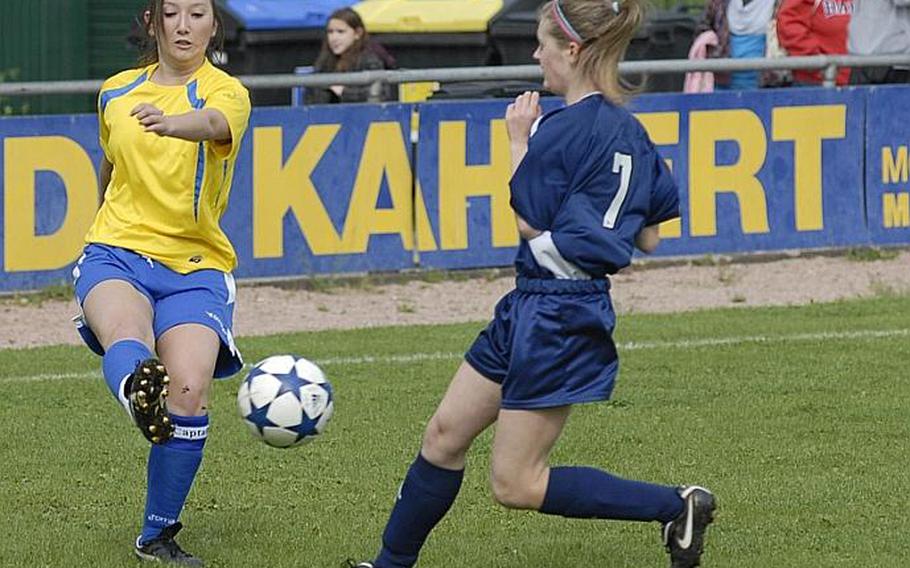 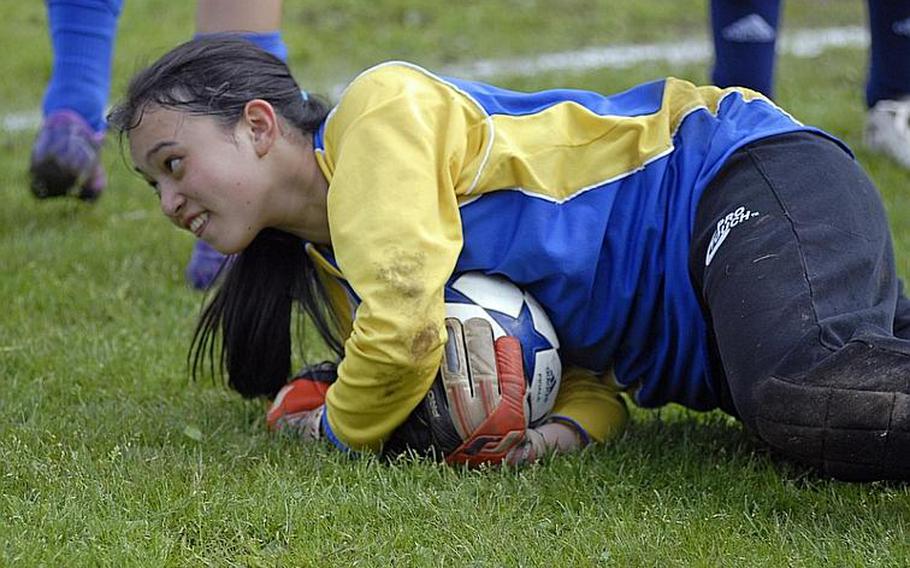 Bitburg sophomore goalie Isabella Madamba snags a save during DODDS-Europe high school soccer action on Saturday. Despite a tough effort, Bitburg was outlasted by the host squad from Wiesbaden, 4-0. (Mark Patton/Stars and Stripes) 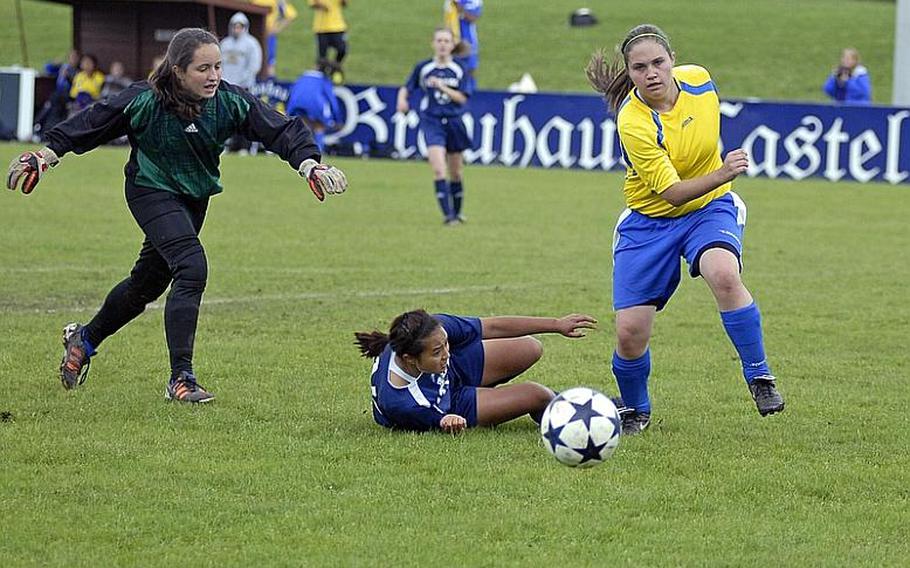 Wiesbaden sophomore defender Mackenzie Jefferson and freshman keeper Rebecca Russell chase down the ball as Bitburg senior Klea Bajala watches from the ground during a soccer match, hosted by Wiesbaden, on Saturday. Wiesbaden won the game, 4-0. (Mark Patton/Stars and Stripes) 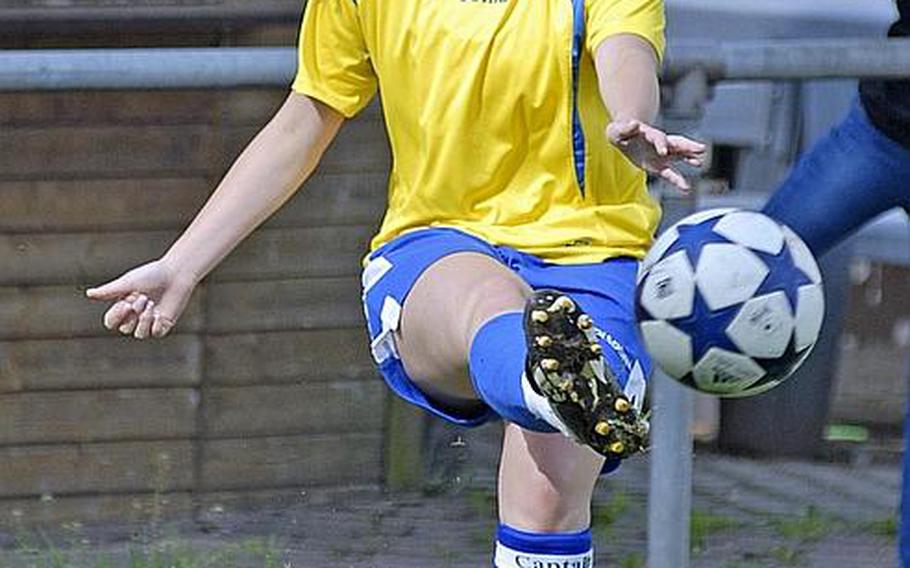 Wiesbaden senior forward Andrea Arnold scored a pair of goals Saturday in the Warriors' 4-0 victory over the visiting Barons from Bitburg. (Mark Patton/Stars and Stripes) 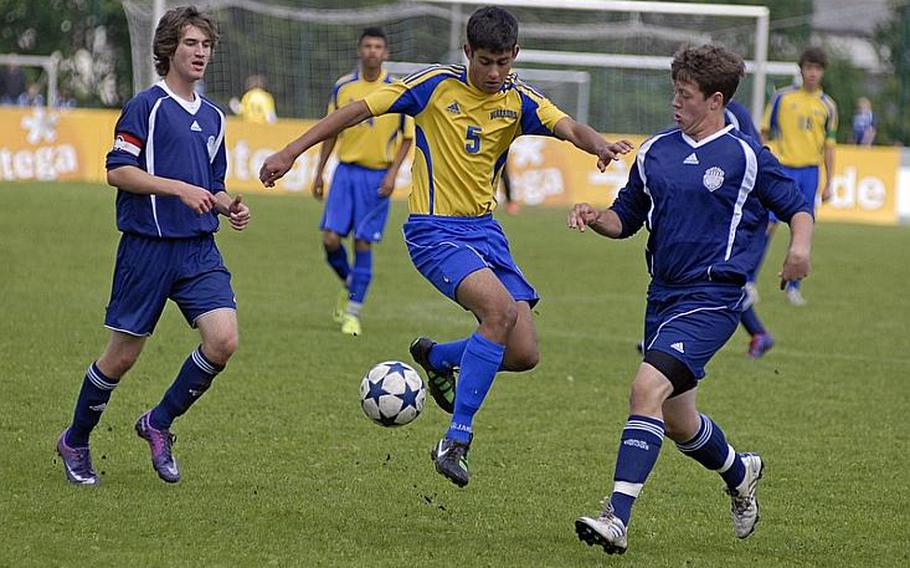 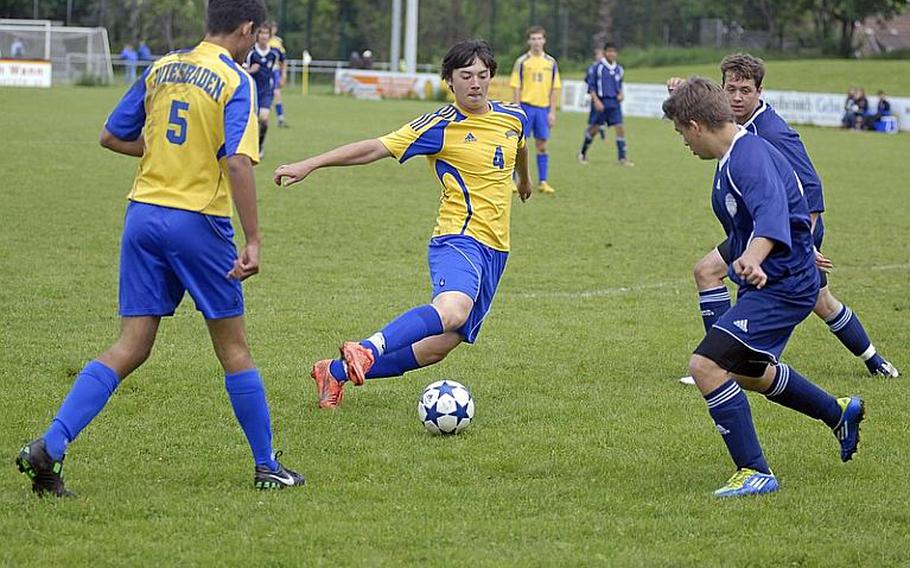 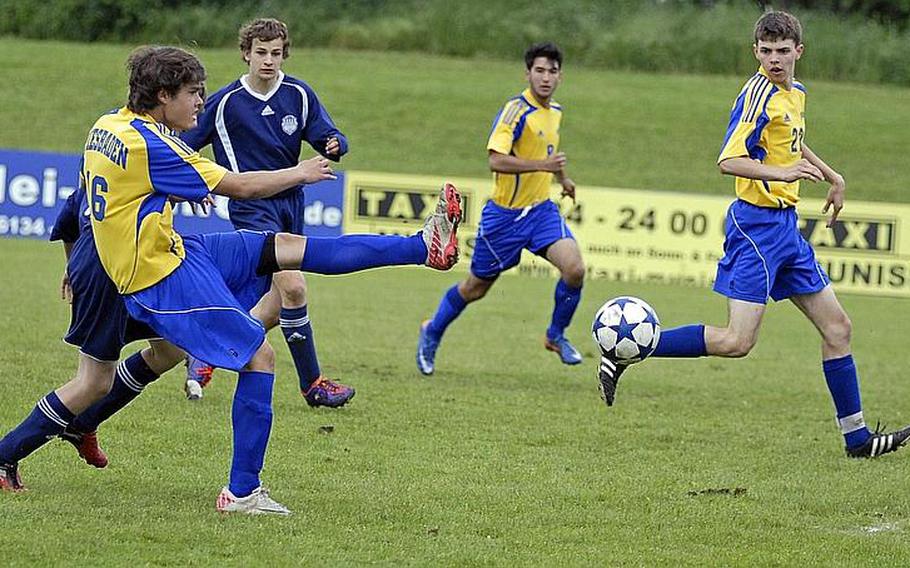 Wiesbaden junior Devan Tisdale sends the ball flying on Saturday during his squad's 7-0 victory over Bitburg. (Mark Patton/Stars and Stripes) 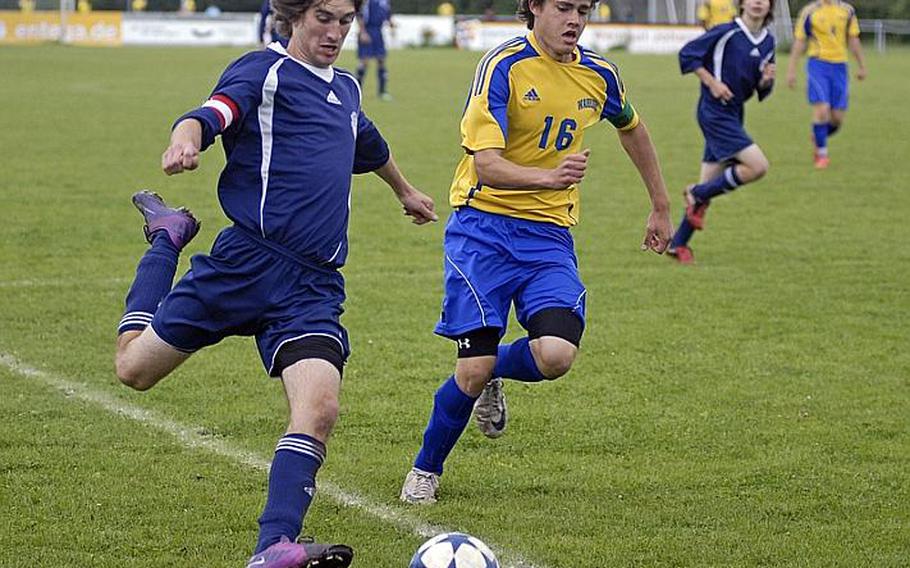 Bitburg senior and co-captain Brandon Roesch kicks the ball while Wiesbaden junior Devan Tisdale tries to catch up on Saturday during the final regular season matchup for the two teams. Wiesbaden went on to win, 7-0. (Mark Patton/Stars and Stripes) 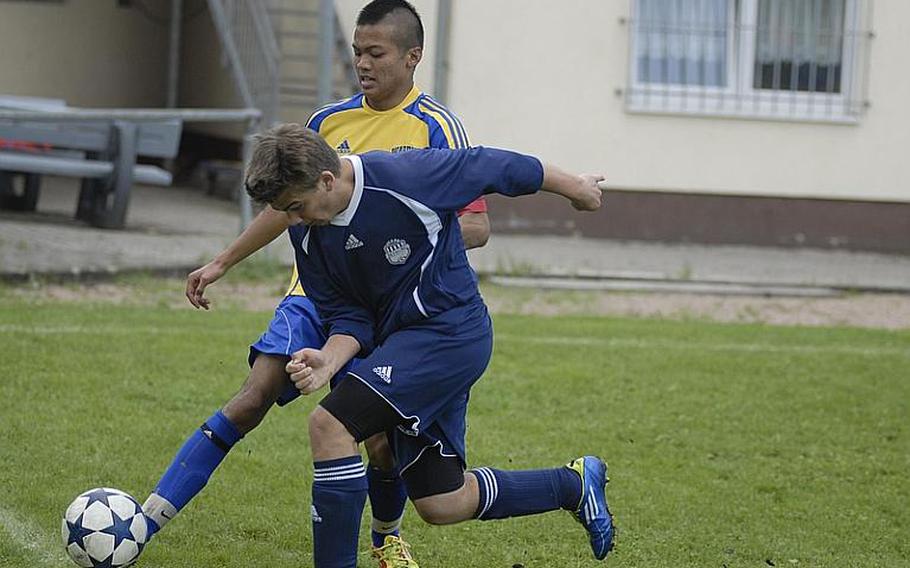 Bitburg sophomore Kenny Love, right, tries to prevent Wiesbaden senior Ryan Fisico from getting to the ball on Saturday during a game that the Warriors won, 7-0. Fisico scored twice. (Mark Patton/Stars and Stripes)

MAINZ-KASTEL, Germany &mdash; Wiesbaden&rsquo;s soccer squads finished off their regular seasons with some momentum heading into the DODDS-Europe championships by blanking Bitburg on Saturday in front of a home crowd at KFV Stadion.

The Wiesbaden girls rode a pair of goals by senior Andrea Arnold to earn a 4-0 victory over the visitors.

In the first half, Wiesbaden was able to funnel the ball into the middle of the field creating plenty of one-on-one situations that kept Bitburg sophomore keeper Isabella Madamba busy.

Junior Meghan Smith kept the pressure on Bitburg early as she constantly found herself in the open, but she was unable to find the net in the early minutes. At the 25 minute mark, Arnold broke through as she was able to convert on a golden opportunity. The shot gave Wiesbaden a 1-0 lead, a score that would hold true through the first half.

&ldquo;I just stood there and I was so scared,&rdquo; said Arnold about the goal. &ldquo;I always miss those, I usually overanalyze.&rdquo;

Bitburg coach Lin Hairstone urged his club at halftime to be more aggressive and go for the ball.

&ldquo;This game isn&rsquo;t out of reach, but you&rsquo;ve got to put one in,&rdquo; Hairstone told his team.

While the Barons amped up their aggressiveness in the second half, the technical prowess of the Warriors proved too much as Arnold scored her second goal early in the second half. Smith and senior Emily Dill added the final two goals for Wiesbaden, putting the game out of reach.

Arnold said the victory helps her team&rsquo;s mindset going into the tournament, slated for May 21-24.

She said scoring a pair of goals in her final home game and attending prom later in the day made things extra sweet.

&ldquo;It&rsquo;s a dream day,&rdquo; an emotional Arnold said as she fought back tears.

The Wiesbaden boys team was looking for its first win in the region and it brought plenty of firepower to achieve it Saturday, as they cruised to a 7-0 victory over the Barons in a physical contest.

In the end, Wiesbaden was able to exploit its advantage in speed and once the goals started, the Warriors never took their foot off the gas pedal.

The Warriors said they feel that they can hang with the big boys come tournament time.

&ldquo;I think we have a pretty good chance,&rdquo; Blake said.