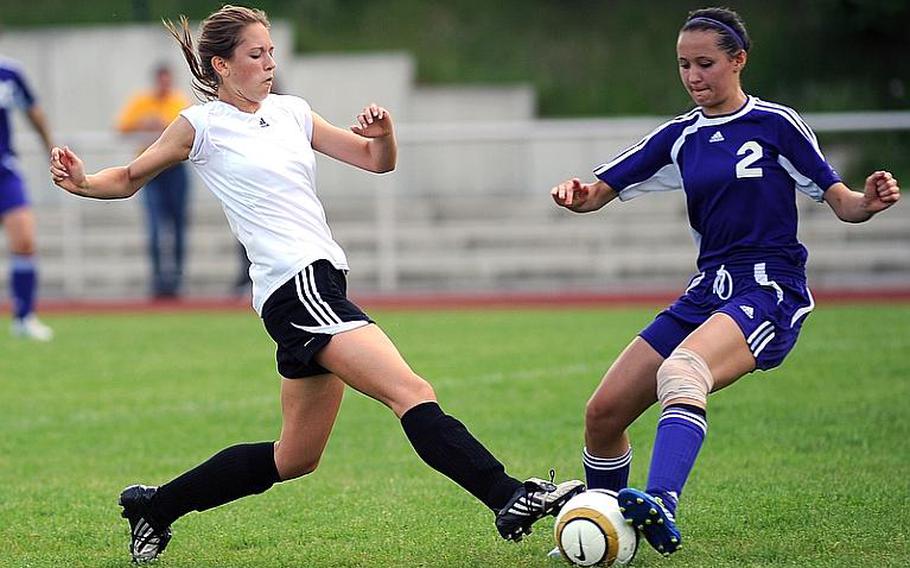 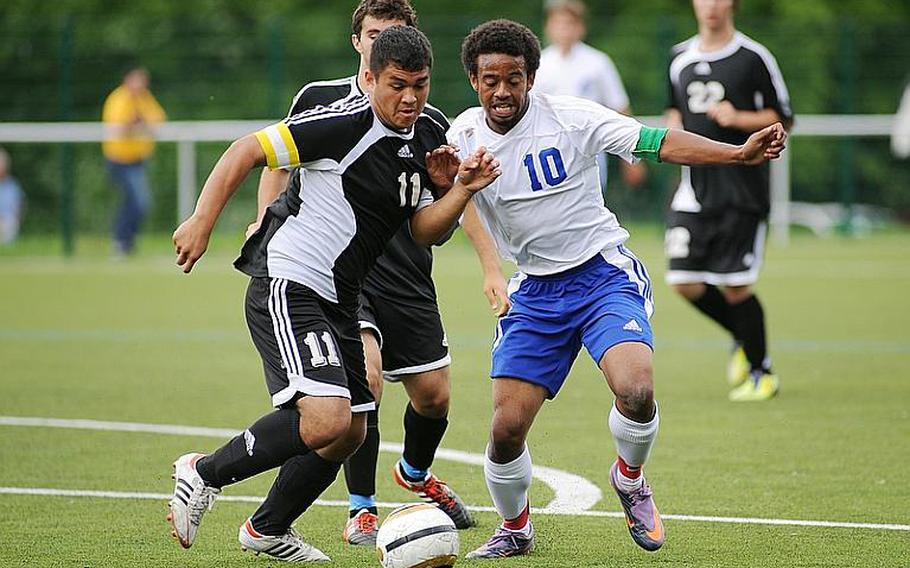 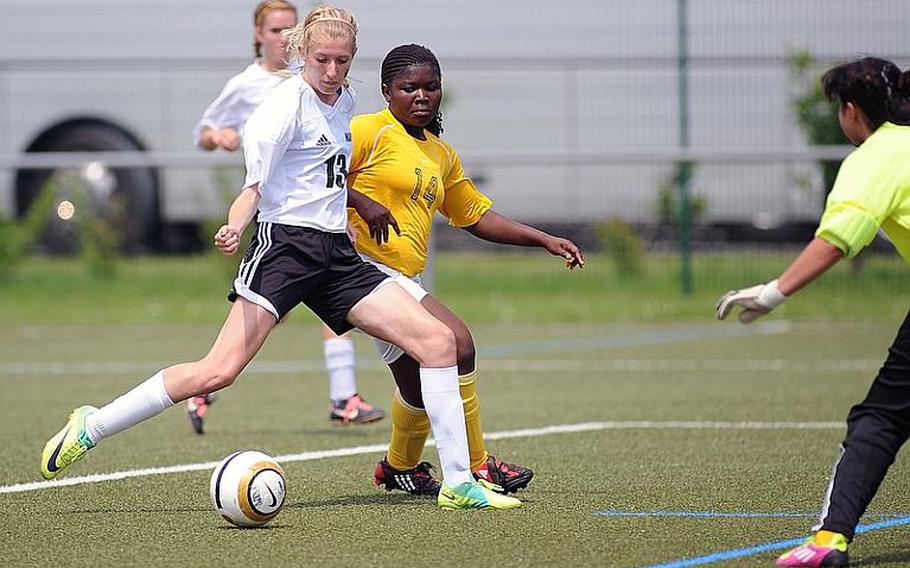 Isabella Lucy of Naples shoves the ball into the net against the defense of Baumholder's Adwoa Sika. Naples beat Baumholder 4-1 in opening day Division II action. (Michael Abrams/Stars and Stripes) 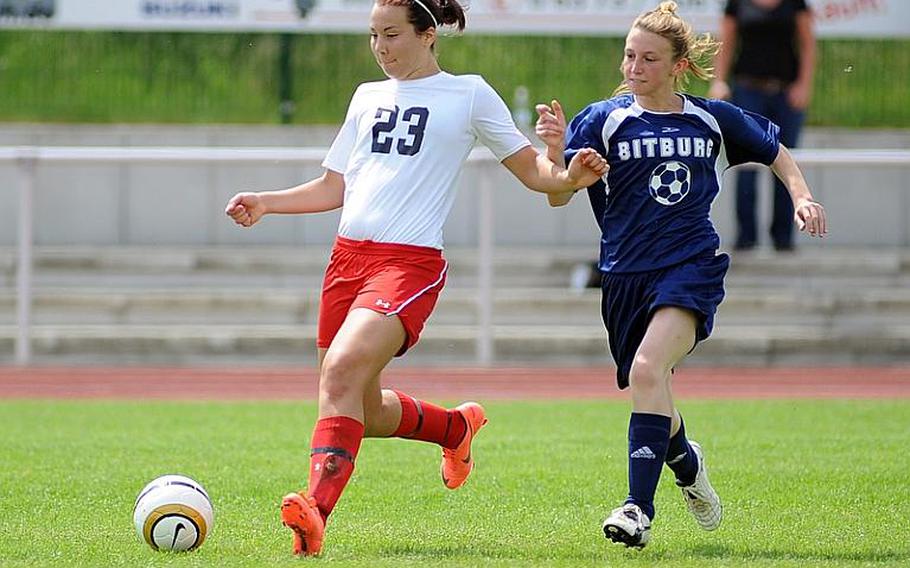 The Vicenza Cougars got the 2012 DODDS European Soccer Championships Division II play started with a bang Monday by toppling the top-seeded Hohenfels Tigers 3-2 on a pair of goals in the game&rsquo;s final two minutes.

The 10th-seeded Cougars trailed 1-0 at halftime, but equalized on a penalty kick converted by Taylor Curry shortly after play resumed, according to Vicenza coach Roland Sturk.

Region III champion Hohenfels then went on top 2-1 and seemed to be headed to victory behind the standout goal-tending of keeper Lance Howard until Nicolo Novek fed Ronaldo Reyter for the equalizer and, moments later, John Camuso banged home the game-winner off a pass from Dale Howell.

The last-minute finishes by Reyter and Camuso took on added luster, coming as they did against Howard.

Despite the Hollywood finish against a team that defeated D-I powers Patch and Vilseck en route to the Region III crown, Sturk said his Cougars, who routed Bahrain 5-1 earlier Monday, were keeping an even keel after claiming the Pool A title.

&ldquo;We&rsquo;re a pretty confident team,&rdquo; Sturk said. &ldquo;We possess the ball well and when we play with the rhythm we did today, we&rsquo;re pretty tough.&rdquo;

Both teams remained alive in the tournament, which is to continue Tuesday with the single-elimination bracket the D-II teams will use for the rest of the way. As a pool champion, Vicenza receives a bye in the tournament&rsquo;s first round.

In the pool-play portion of the D-II girls&rsquo; tournament at Waldmohr, Germany, Game 1 was the first one in more ways than one for the Schweinfurt Razorbacks.

&ldquo;It&rsquo;s quite the honor to be the first team from our school to play Euros,&rdquo; said Tanzania Thomas, a senior wing for the school that opened its doors for the first time last August. &ldquo;We all realized before the tournament that we would be doing something special.&rdquo;

Not content with that sort of groundbreaking, however, the Razorbacks, seeded eighth, enhanced the occasion by pinning a 1-0 defeat on No. 13 Bitburg.

Although the game was new for her school, it was like old times &ndash; treasured old times, at that &ndash; for Thomas, who played in this event last year for Mannheim. Mannheim closed its doors last June.

&ldquo;It&rsquo;s so much fun to play Euros,&rdquo; she said.

Schweinfurt fell 2-0 to No. 3 Marymount in Monday&rsquo;s late game in its final pool-play outing. Monday&rsquo;s results were used to seed a single-elimination bracket the Division II boys and girls will follow for the final three days of the tournament.

And according to Vicenza midfielder Sade Elliott, single-elimination&rsquo;s a much different ball game than pool play.

&ldquo;It&rsquo;s more nervous,&rdquo; she said about the trip to come after the No. 4 Cougars blanked Bahrain 5-0 in their opener.

Elliott admitted to some first-game jitters. Vicenza led just 2-0 at halftime on unassisted free-kick goals from just outside the top of the penalty area by Miranda and Frank.

Miranda got things started in the 15th minute by lofting a howitzer shot just under the cross bar and over the outstretched hands of Bahrain keeper Sarah Abed; Frank banged her shot into the lower left corner of the net 12 minutes later.

Abed, however, was valiant throughout, making the first of her 13 saves in the first minute. Vicenza keeper Rima Gasparini, by contrast, was called on to make just one save during the game played almost exclusively in Bahrain&rsquo;s end of the field.

The tournaments are to conclude Thursday with six consecutive championship games at Ramstein High School. The parade of finales is to begin at 10 a.m.