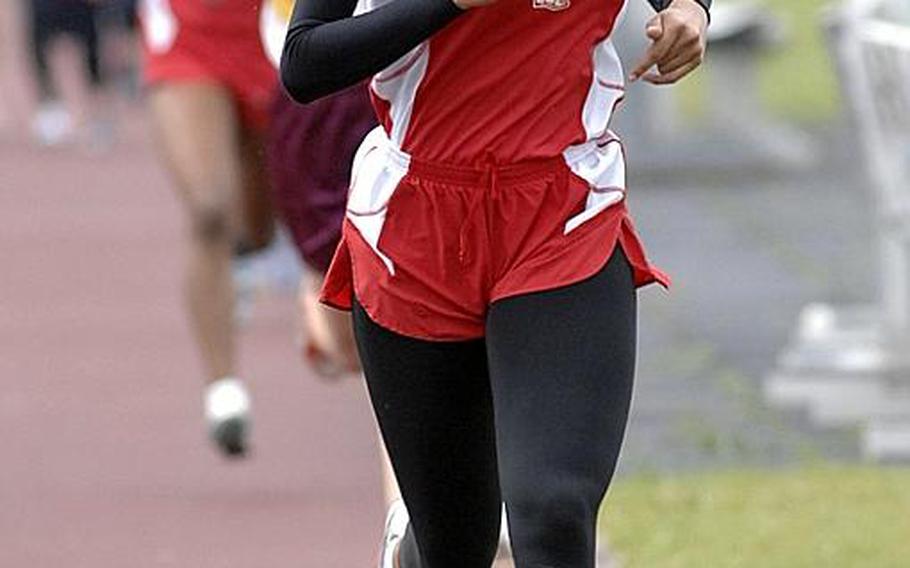 Buy Photo
Kaiserslautern's Rio Shaune Harris, who won the 800-meter run in the 2010 European track meet, is out to defend her title and help the Lady Raiders win another team title (Michael Abrams/Stars and Stripes)

Only Lakenheath&rsquo;s long- and triple-jump gold-medalist Jasmin Walker and Kaiserslautern&rsquo;s 800-meter champion Rio Shaune Harris are back for another go. But several other high placers are back.

And although Walker&rsquo;s winning jumps of 16 feet, 4&frac12; inches and 35-6&frac14; in long- and triple-jumps, respectively, were around 3 feet short of European records in each event, Harris represents another story altogether.

Harris, the 2010 silver medalist at 400 meters, ran a leg on Kaiserslautern&rsquo;s European record-setting 2010 4x800 relay team, and with another runner from that foursome, European 1,500-meter bronze medalist Colleen Davis, back for another turn, the Lady Raiders&rsquo; best-in-DODDS-history 9 minutes, 58.43 seconds could be in danger.

Harris and Davis, along with returning teammate Ruby Plummer, also might threaten the 4x400 record of 4:03.70. According to K-town coach Dennis DePriest, his female quarter-milers clocked a school record 4:11 last season and will run sophomore 3,000-meter European bronze medalist Ashley Santos in that event this year.

Add to K-town&rsquo;s mix sophomore Emily Ciocca, a distance specialist, and impressive freshman Alana Dickerson, who can throw the discus, run hurdles and relay legs, and how good are Kaiserslautern&rsquo;s chances for an 11th straight team title?

&ldquo;I am not sure if the second- and third-place girls teams combined could outscore the K-town girls at finals,&rdquo; Vilseck coach Eric Mead wrote in a recent email,

Look for Walker to dominate the jumps again, along with a foot race or two, according to her coach, Louis Martin.

&ldquo;Jasmin has redesigned herself for this season, and we expect she will jump and sprint,&rdquo; Martin said.

Wiesbaden&rsquo;s Kelly Colbert is the other returning podium-finisher in the girls dashes. Colbert took third in the 100 and 200, and was third in the high jump.

Chasing Walker in the jumps are likely to be Mannheim&rsquo;s double 2010 silver-medalist, junior KaDedra Lea, and AFNORTH&rsquo;s Sara Sawyer, third in both events.

Vilseck&rsquo;s Mariah Morris, second in the discus in 2010, also returns.

AFNORTH expects to contend in D-II with 2010 400-meter fourth-place finisher Mercedes Ash adding her potential points to those of Sawyer.

Last year, Brussels was the lone Division III team to score at Europeans.