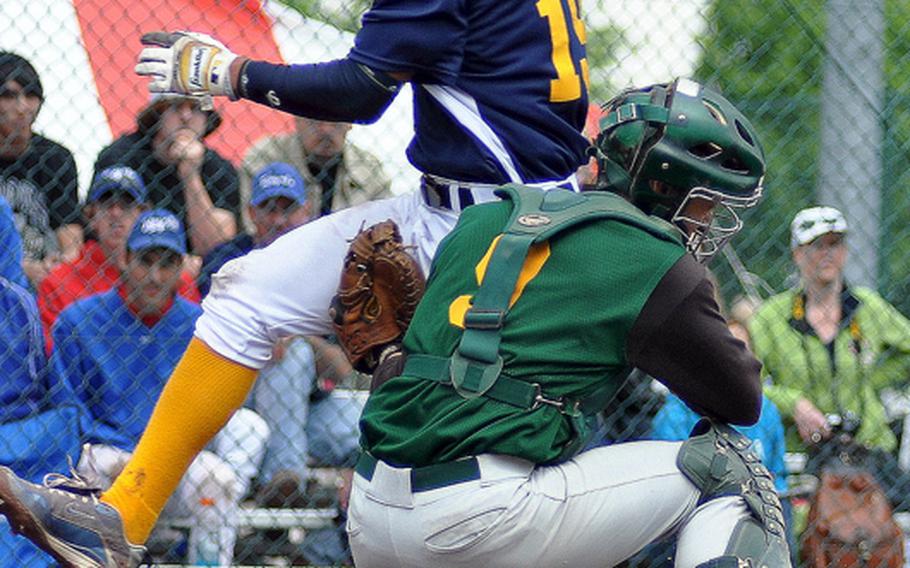 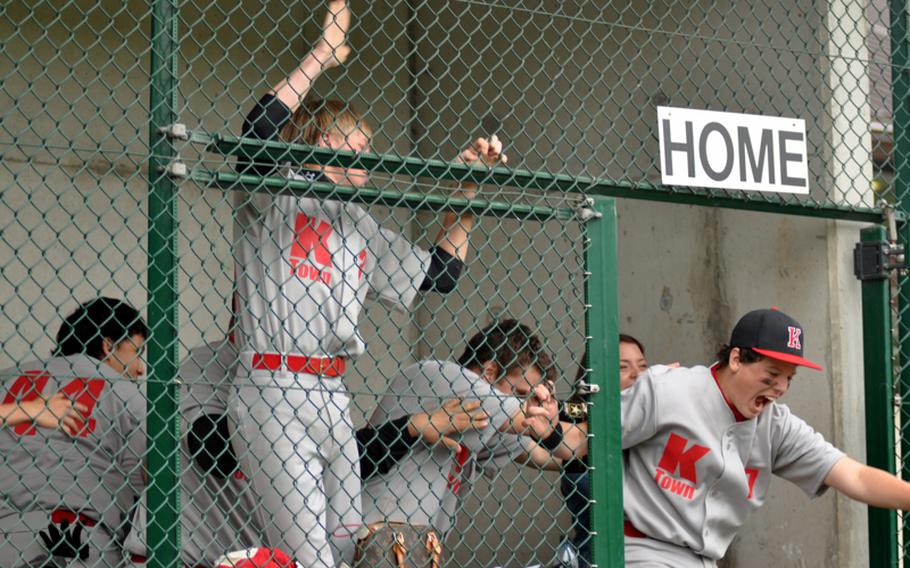 Kaiserslautern players erupt out of the dugout after Aaren Blossom hit a grand slam against Vilseck during opening-day action in the Division I baseball tournament at Ramstein Air Base, Germany, on Thursday. Kaiserslautern won 10-2. (Warren Peace/Stars and Stripes) 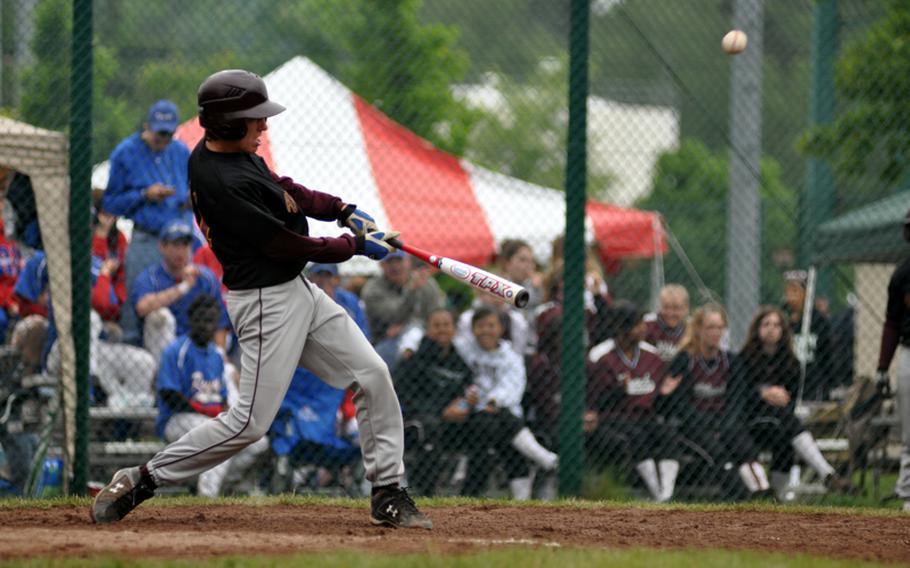 Vilseck third baseman Jake Blackburn hits a single to left field to drive in a run during the top of the fourth inning of a game against Kaiserslautern on the first day of the DODDS-Europe Division I baseball tournament at Ramstein Air Base, Germany, on Thursday. Kaiserslautern won 10-2. (Warren Peace/Stars and Stripes)

RAMSTEIN AIR BASE, Germany &mdash; The Naples Wildcats are used to having All-Europe pitcher Logan Porchie come to the rescue, so Thursday&rsquo;s 8-6 victory over Mannheim in the Wildcats&rsquo; opening game of the European Division II-III high school baseball tournament might be regarded as business as usual.

Usual, that is, if thoroughly closing out the opposition is a part of your daily routine.

With the 90-minute time limit about to expire and Mannheim leading 6-5, Porchie came up with two outs and the bases empty against Mannheim closer Rafael Ramos.

Porchie drove Ramos&rsquo; first pitch for a corkscrewing line drive to center field that ended up on the turf for a two-base error. Porchie then came home to tie the game when Mannheim couldn&rsquo;t handle Jonathan Bruce&rsquo;s ground shot, and the Wildcats added two runs before the Bison could register the final out of the inning.

Porchie then came in to strike out Mannheim&rsquo;s final three batters to end the game.

&ldquo;We came out on top,&rdquo; Porchie said in minimizing his part in the second-seeded Wildcats&rsquo; escape.

Seventh-seeded Mannheim was not without heroics of its own Thursday. Chris Ramirez&rsquo;s bases-loaded double down the left field line highlighted a six-run inning that gave the Bison a 6-5 lead.

In the Division I event, top-seeded Ramstein hammered Wiesbaden 19-2 and No. 5 Kaiserslautern scored eight last-inning runs to down No. 4 Vilseck 10-2.

The biggest blow of the game for Kaiserslautern was Aaren Blossom&rsquo;s grand slam, the first of his life.

&ldquo;It was a fastball,&rdquo; Blossom said after the game as he held the ball he clubbed over the right-center field fence, &ldquo;a meat ball.&rdquo;

Ramstein saw a few meat balls themselves in their opener, banging out 19 hits, two of them home runs.

Finn Friedenberger and All-European Josh Sloan stroked the round-trippers to make a winner of Matt &ldquo;Moose&rdquo; Chodzko, who fanned three and allowed just two hits in his three innings of work.

Ramstein downed Kaiserslautern 10-4 later in the day to move into position to reach Friday afternoon&rsquo;s semifinals at Ramstein Southside fields.

In other D-I pool play games on Thursday, unbeaten No. 2 Patch rolled over Lakenheath 12-1, and SHAPE upset No. 3 Heidelberg 7-3.