Buy Photo
Players from Patch greet junior Cavan Cohoes after he hit a two-run home run to tie the game 8-8 during the European Division I high school baseball championship game at Ramstein Air Base on Saturday. Patch went on to defeat Ramstein 10-9. (Mark Patton/Stars and Stripes)

Buy Photo
Players from Patch greet junior Cavan Cohoes after he hit a two-run home run to tie the game 8-8 during the European Division I high school baseball championship game at Ramstein Air Base on Saturday. Patch went on to defeat Ramstein 10-9. (Mark Patton/Stars and Stripes) 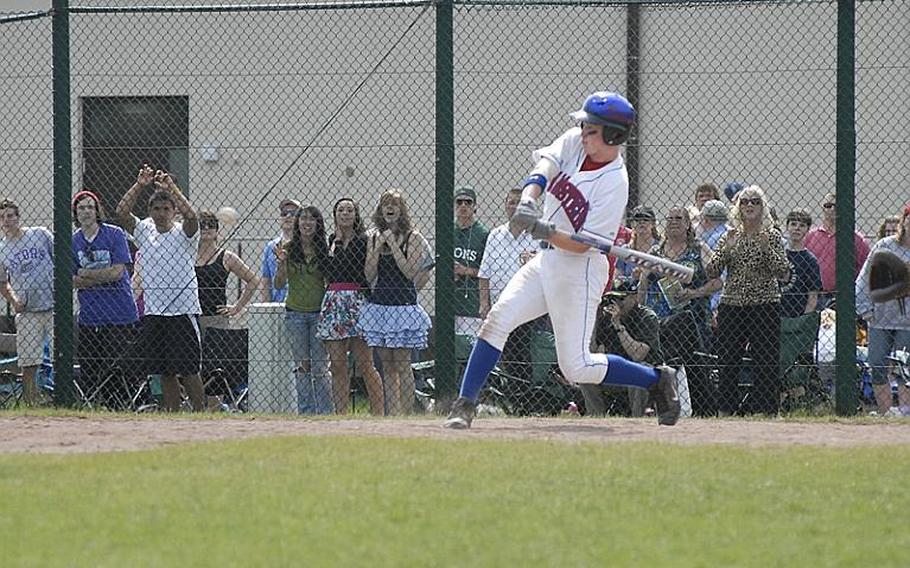 Buy Photo
Ramstein sophomore Shane Foley shows off his power as he launches a solo home run in the final inning of Saturday&#39;s European Division I high school baseball championship game at Ramstein Air Base. After getting off to a strong lead, the defending champions fell to Patch 10-9. (Mark Patton/Stars and Stripes) 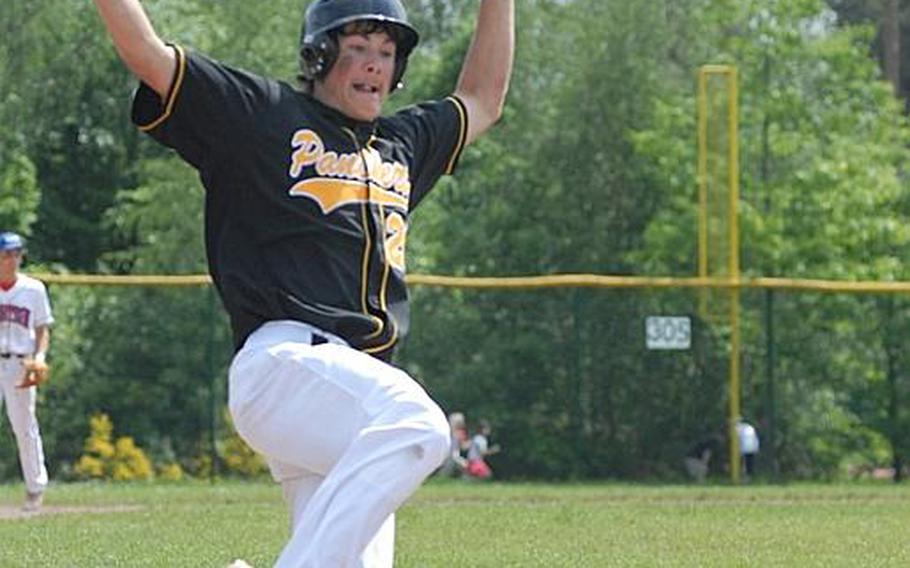 RAMSTEIN AIR BASE, Germany &mdash; All-Europeans Justin Phelps and Cavan Cohoes delivered in the clutch Saturday as Patch rallied past Ramstein to win the DODDS-Europe Division I baseball championship 10-9.

&ldquo;It was awesome,&rdquo; Cohoes said about the high fastball he dispatched over the left-center field fence for what proved to be a decisive two-run homer that allowed Patch to complete an unbeaten season. The blast, which cleared the fence at the 310-foot mark, put Patch up 10-8 in the top of the sixth inning.

Cohoes didn&rsquo;t stand around to admire his big shot.

Cohoes&rsquo; homer followed a two-run single that tied it 8-8 by winning pitcher Phelps, whose team trailed all day until the four-run rally in its final at-bat. Phelps helped dig Patch&rsquo;s hole, surrendering four runs to the defending European D-I champs in the first inning on two walks and two hits.

Second-seeded Patch needed those three innings on Friday to nail down a 5-2 semifinal victory over fifth-seeded Kaiserslautern. Altogether, Europe&rsquo;s best left-hander threw 53 pitches on Friday and 101 on Saturday.

The last half-dozen or so of those came in the bottom of the sixth, when Phelps reached back to close out the game. Phelps got All-Europe third baseman Josh Sloan on a ground ball he fielded along the first baseline and induced DH Matt Choedzko to pop to second. After Ramstein shortstop Shane Foley hammered a solo homer to right to make it 10-9, Phelps retired Jon Groteleuschen on a fly to center to end the game.

Back-to-back doubles by Phelps and Cohoes cut Ramstein&rsquo;s lead to 4-1 at the end of one, and Phelps hit a two-run homer in the third to make it 5-3. But when Ramstein scored three runs on homers by starting All-Europe pitcher Matt McDonald and Sloan, and then retired the side in order in the bottom of the frame, the top-seeded Royals were tasting a second straight title.

However, Patch wasn&rsquo;t through.

&ldquo;We knew they were going to hit the ball,&rdquo; Phelps said. &ldquo;It was just a matter of getting our sticks working. We weren&rsquo;t striking out, so we knew we could do it.&rdquo;

C.J. Kellogg singled home two runs, and Ryan Brady singled home another in the fifth to cut the deficit to 8-6 and set the stage for the last at-bat heroics.

&ldquo;It was a great game,&rdquo; Cohoes said. &rdquo;We were down, but we stuck with it. We&rsquo;ve been doing that all year.&rdquo;