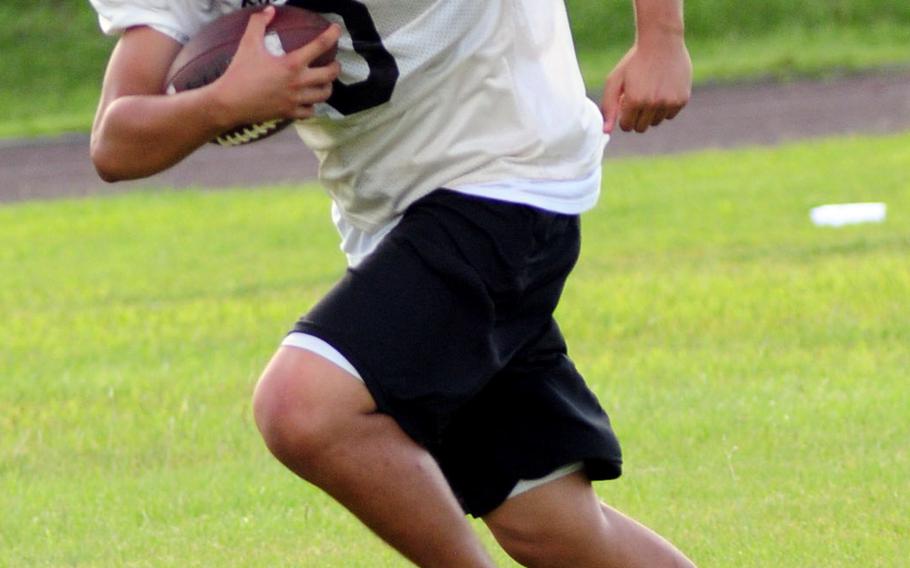 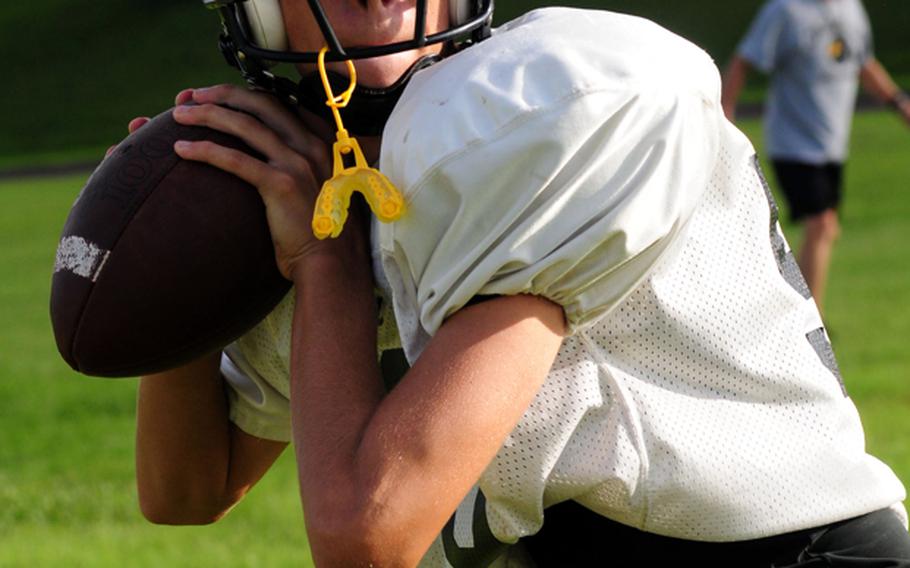 Buy Photo
Justin Williams is one of a handful of seniors on a Kadena Panthers roster comprised of 90 percent freshmen and sophomores. (Matt Orr/Stars and Stripes) 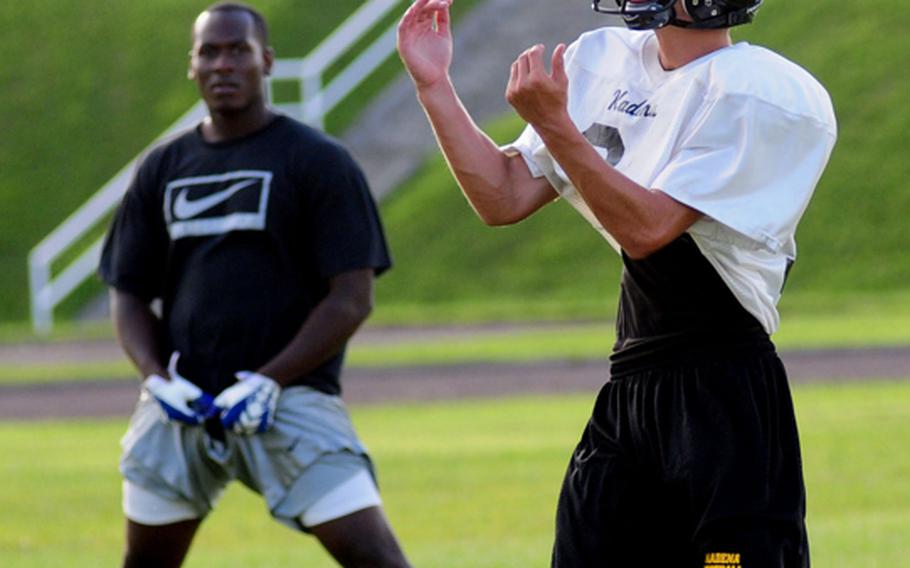 Buy Photo
Freshman Justin Sego, readying to catch the ball, is one of several promising underclassmen Kadena Panthers coach Sergio Mendoza will be counting on out of the backfield this coming season. (Matt Orr/Stars and Stripes) 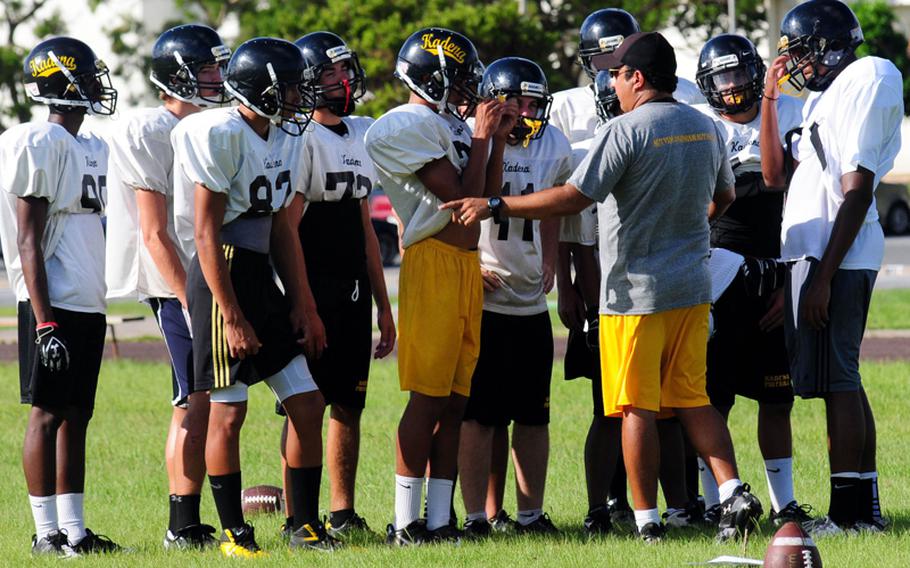 Buy Photo
Coach Sergio Mendoza chats it up with his charges during practice. He's won three Far East Division I titles at the Kadena Panthers' helm, including the last two, but his 2011 team returns just two players and his roster is comprised of 90 percent freshmen and sophomores. (Matt Orr/Stars and Stripes)

Sixth in a series of high school football previews.

KADENA AIR BASE, Okinawa &ndash; With just two returners from the 2010 championship season &ndash; neither of them named Shariff Coleman or Thomas McDonald &ndash; the question at Kadena football camp is how will coach Sergio Mendoza deal with all that lost production?Coleman and McDonald were arguably the most prolific running backs in Panthers football history, combining for 5,118 yards and 69 touchdowns as Kadena dominated both the Okinawa Activities Council and Far East Division I playoffs.Only linemen Josh Dyer, a junior, and senior Gabriel Ahner remain. And Mendoza says this may be the biggest building job he faces yet entering his sixth season at Kadena&rsquo;s helm.&ldquo;We may have to throw out the playbook,&rdquo; Mendoza said of the power attack that netted those yards, touchdowns and titles.&ldquo;We don&rsquo;t really know what we have yet. We&rsquo;re very young. I&rsquo;ve never had to give out so many medium and small shoulder pads.&rdquo;In fact, 90 percent of the Panthers&rsquo; 68 bodies over the late summer two-a-day workouts are freshmen and sophomores.Losing great players is a fact of life in high school football, Mendoza says, and it&rsquo;s a testimony to the program that they&rsquo;ve been able to build winners despite losing so many great players.Quarterback Stanley Schrock (2010), the Broome linemen brothers, Mike (2008) and Tyler (2010), and Vince Coronado (2009) moved on, yet the Panthers continued to win.&ldquo;Every year we&rsquo;ve won, we weren&rsquo;t supposed to be as good the next year,&rdquo; Mendoza said. &ldquo;We have the winning tradition. We&rsquo;ve had solid teams the past five years and we&rsquo;ve built on them. We have a really strong summer conditioning program. We have really good team speed.&rdquo;Though thin in experience, Mendoza feels a handful of his players show promise, such as sophomore quarterback Dominic Shea, receiver Chris McQuillan and running backs Nick Perry, Joey Dyer and Justin Sego &ndash; all underclassmen.Kadena begins its season Saturday by visiting a team that has given it problems the past five years &ndash; Seoul American, which beat Kadena 16-8 in overtime in 2006 and 22-21 in 2008 for its two Division I titles.Because the Division I playoffs begin with play-in games on Oct. 3, the Panthers must face their island-rival, Kubasaki, twice in September. Those games are Sept. 9 at Kubasaki and Sept. 23 at Ryukyu Middle School.The Oct. 3 play-in games feature Seoul American at Japan&rsquo;s No. 2 Division I team and Guam High at Okinawa&rsquo;s No. 2 Division I team.The winners of those games visit Japan&rsquo;s and Okinawa&rsquo;s top D-I teams Oct. 29, with the winners to move on to the D-I title game scheduled for Nov. 12.ornauerd@pstripes.osd.mil