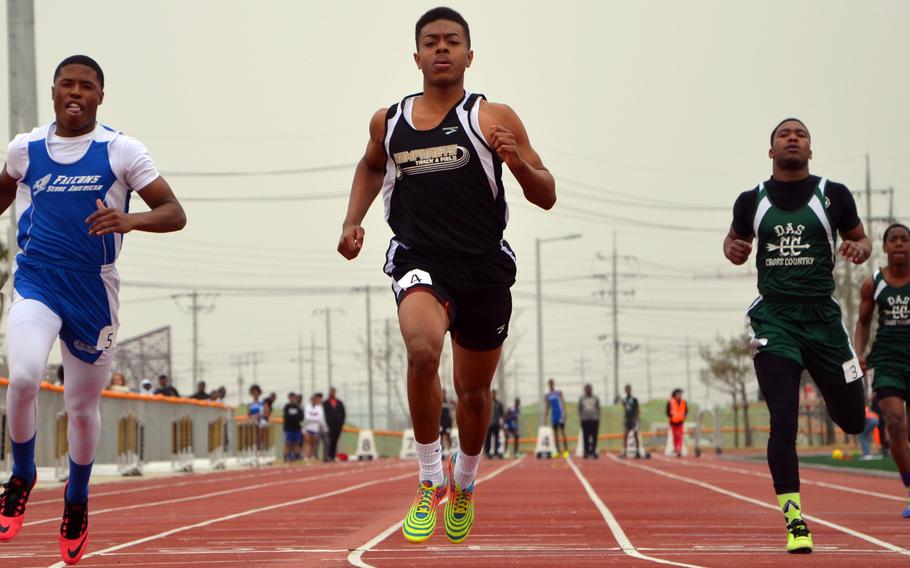 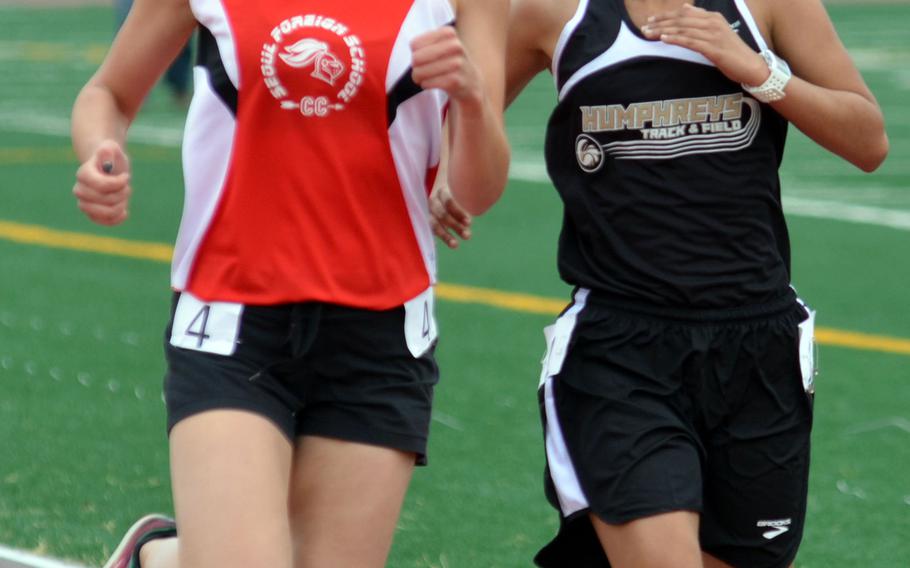 Seoul Foreign's Grace Charnesky and Humphreys' Nicole Castro pound for home in the 3,200 during Saturday's DODDS Korea track and field meet at Camp Humphreys, South Korea. Charnesky won in 12 minutes, 55.19 seconds en route to a sweep of the 3,200, 1,600 and 800 in the first appearances by international schools in a DODDS Korea meet. Gyeonggi Suwon International also sent a small team. (Cassidy Dowling/Special to Stars and Stripes) 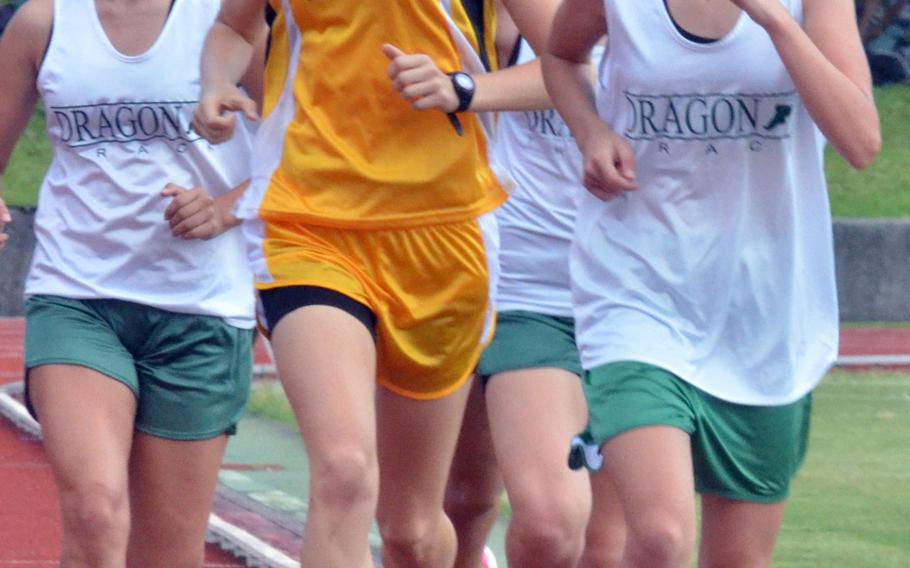 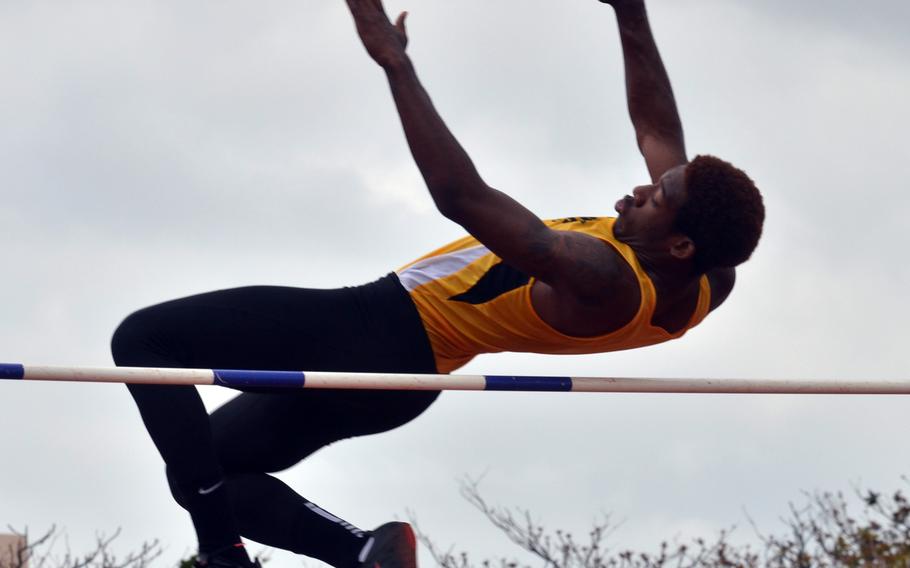 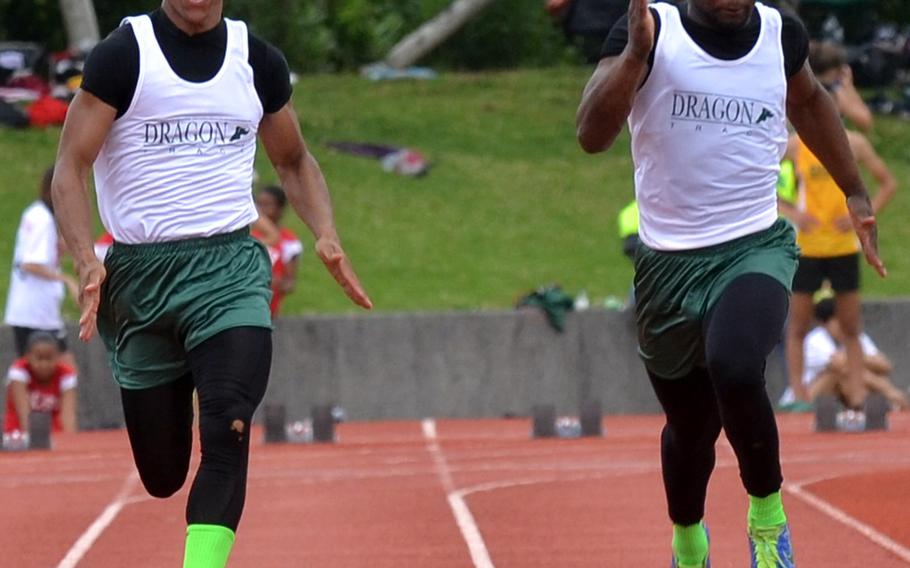 Kubasaki's' Rahman Farnell and Jarrett Mitchell compete side-by-side in the 100-meter dash during Saturday's Okinawa track and field meet at Mihama, Okinawa. Farnell and Mitchell placed 1-2 in 10.99 and 11.23 seconds. (Dave Ornauer/Stars and Stripes) 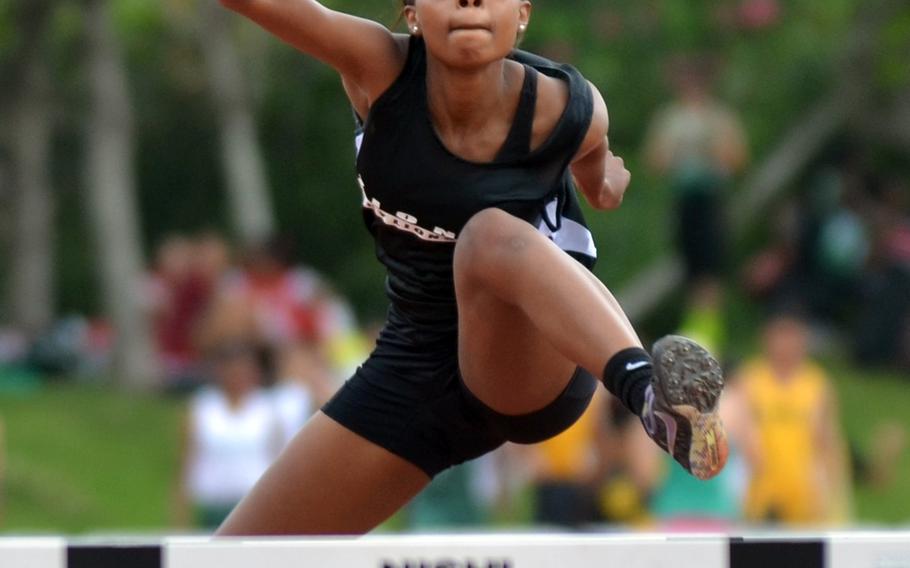 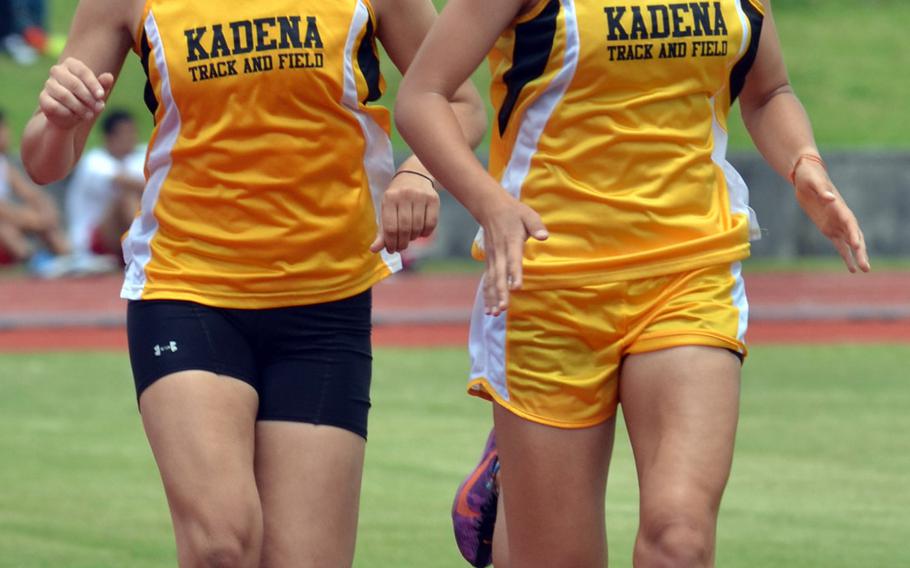 TOKYO – What began as speed work during early morning and afternoon basketball practice over the winter reaped major benefits Saturday on the track for Daniel Galvin.

The Yokota sophomore distance specialist broke the Pacific record in the 800, clocking 1 minute, 56.89 seconds, beating the six-year-old record by .41 seconds on a windy but sunny day at Tokyo’s Oi Pier Ground Stadium.

The work that he did during basketball practices “really helped me with my 800 and 400 times,” Galvin said. He played junior varsity basketball for the Panthers after running cross country and winning the DODDS Japan and Kanto Plain titles last fall.

Both Galvin and his coach, former Hong Kong Olympian Maggie Chan-Roper, feel that he can drop as many as two seconds off his time.

On Saturday, he topped the old mark of 1:57.3 set in 2008 by Blake Bannister of Christian Academy Japan. Others who have gone under two minutes are CAJ's Marshall Merriam and Kyle Carrick, Tomas Sanchez of Kadena - now running for the Merchant Marine Academy - and Kubasaki’s Ryan Bugler.

Galvin ran against the clock the first three meets of the season, but now that American School In Japan and its strong distance cadre has begun competing, Galvin said he feels he can be sufficiently pushed to run faster.

Okinawa, meanwhile, held its first meet off base on Saturday, at Chatan Stadium near American Village in Mihama, and the first to feature automated timing this season.

Perhaps inspired by former Kadena high jumper Lotty Smith, the only Pacific athlete in history to top two meters, current Panther senior Preston Harris says he’s reaching for high heights, and though he might not match Smith, he says he’d like to jump his height, 6-foot-5.

“My boy Lotty. Only 5-9,” Harris said after clearing 6-2 on Saturday. While he says he has the jump and arch portion down, he still needs work on his form to prevent his backside from striking the bar.

“It was a long day,” said organizer Mitch Moellendick of a meet that welcomed some 170 athletes.

Correction Marshall Merriam and Kyle Carrick were omitted from a list of runners who have broken the 2-minute barrier for the 800 in an earlier version of this article.