Big line should have Yokota in title mix 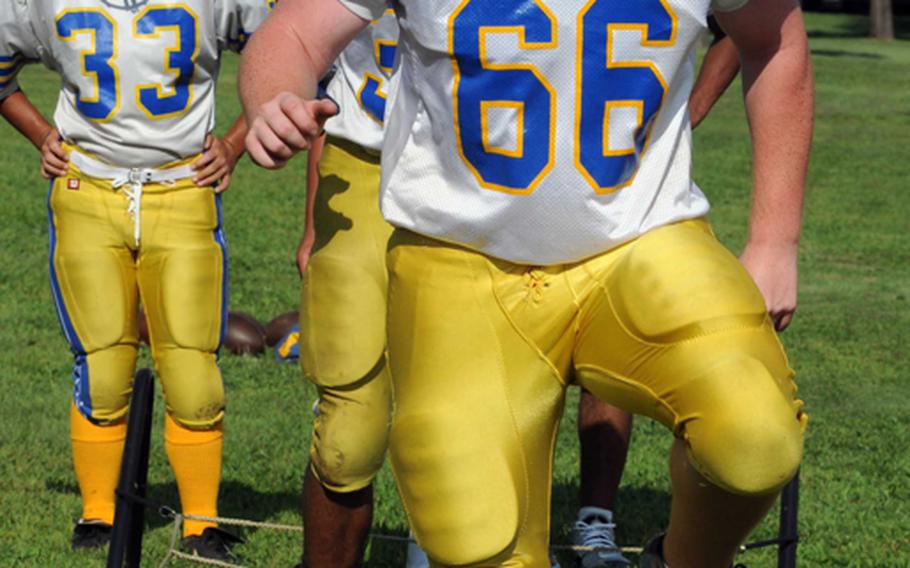 At 6-foot-5, 265 pounds, junior Jesse Hogan headlines a Yokota Panthers line that for the first time since 2001 features five players who weigh 200 pounds or more. (Dave Ornauer/stars and Stripes)

At 6-foot-5, 265 pounds, junior Jesse Hogan headlines a Yokota Panthers line that for the first time since 2001 features five players who weigh 200 pounds or more. (Dave Ornauer/stars and Stripes) 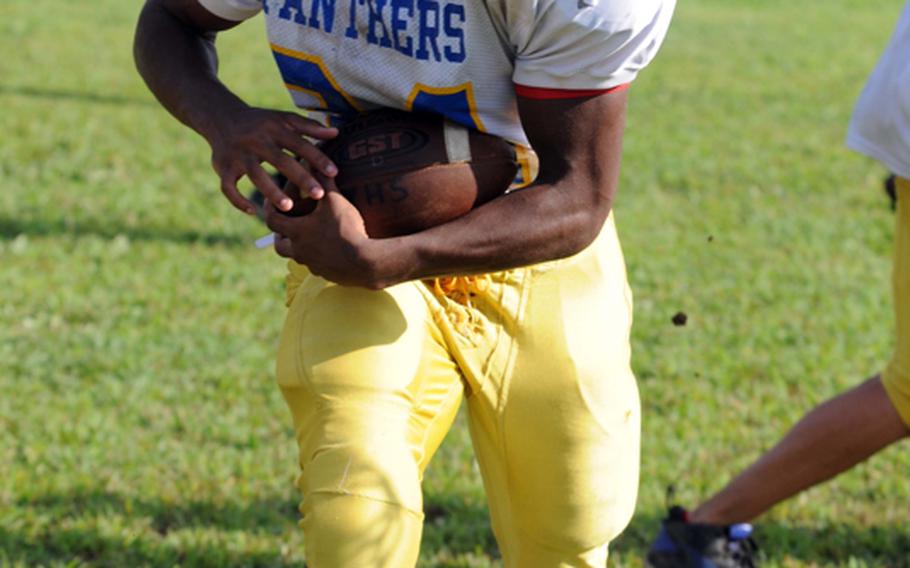 Buy Photo
Raymond Butler will be one of several running backs toting the football behind a Yokota Panthers line that for the first time since 2001 features five players who weigh 200 pounds or more. (Dave Ornauer/Stars and Stripes)

Third in a series of high school football previews.

YOKOTA AIR BASE, Japan &ndash; Not since the 2001 season, when Yokota won its second straight Rising Sun Bowl and senior Darren Taylor rushed for a then-Japan record 1,802 yards, have the Panthers had a line this big.Dylan Kessler (205 pounds), Jesse Hogan (265), Victor Madaris (230), Jerrell Fuller (215) and Jake Jackson (205) stand as the largest group to wear blue and gold since then. They&rsquo;re all juniors with a year&rsquo;s starting experience under their belts and they&rsquo;ll all return for their senior years.That has coach Tim Pujol and his players thinking something that&rsquo;s eluded them since the Far East playoffs began in 2005 &ndash; a Division I title. Perhaps this season.&ldquo;That&rsquo;s how we feel,&rdquo; Hogan said during Wednesday&rsquo;s practice. &ldquo;We&rsquo;re all bigger, we&rsquo;re all more confident.&rdquo;&ldquo;I feel safe,&rdquo; said junior quarterback Stanley Speed. Of how he feels Yokota might fare this season, he added: &ldquo;I get butterflies just thinking about it.&rdquo;Pujol, who enters his 13th season at the helm of a Yokota team that finished third and second the last two years in the Far East playoffs, attributes the line&rsquo;s growth to Yokota&rsquo;s off-season conditioning program.&ldquo;These kids busted their butts this summer,&rdquo; he said. &ldquo;I&rsquo;m so proud of the hard work they put in.&rdquo;Speed and Hogan said virtually the entire team spent each day over summer working with weights and other equipment.&ldquo;These kids have all played last year, they&rsquo;re familiar with the system,&rdquo; Pujol said. &ldquo;They&rsquo;re home grown. It&rsquo;s not often you can keep a kid for three years, and we&rsquo;re keeping a bunch of them.&rdquo;But compare this group to the one 10 years ago, and Pujol puts up a cautionary hand.&ldquo;That&rsquo;s pretty lofty heights,&rdquo; he said. &ldquo;I like this group. They work hard, they have good attitudes, they practice well, they have good team speed and size. There&rsquo;s not a lot to not like about this group.&rdquo;Whether this does, in fact, spell the end of the title drought, Pujol can&rsquo;t say. &ldquo;The expectations are always high&rdquo; at Yokota, which has won 11 DODDS Japan and Kanto Plain titles under his reign. &ldquo;We&rsquo;ll be a tough opponent every week.&rdquo;With the change in the Far East D-I playoff system, Yokota plays its two games against its lone Japan D-I opponent, Nile C. Kinnick, twice in September to determine the top two places.Japan&rsquo;s No. 2 Division I team hosts Seoul American, while Okinawa&rsquo;s second-place D-I team entertains Guam High on Oct. 3 in play-in games.In the semifinals on Oct. 29, the Seoul-Japan winner then visits Okinawa&rsquo;s top D-I team and the Guam High-Okinawa winner travels to Japan&rsquo;s top D-I team for the right to play in the Far East championship on Nov. 12. ornauerd@pstripes.osd.mil