Not much change expected in girls hoops 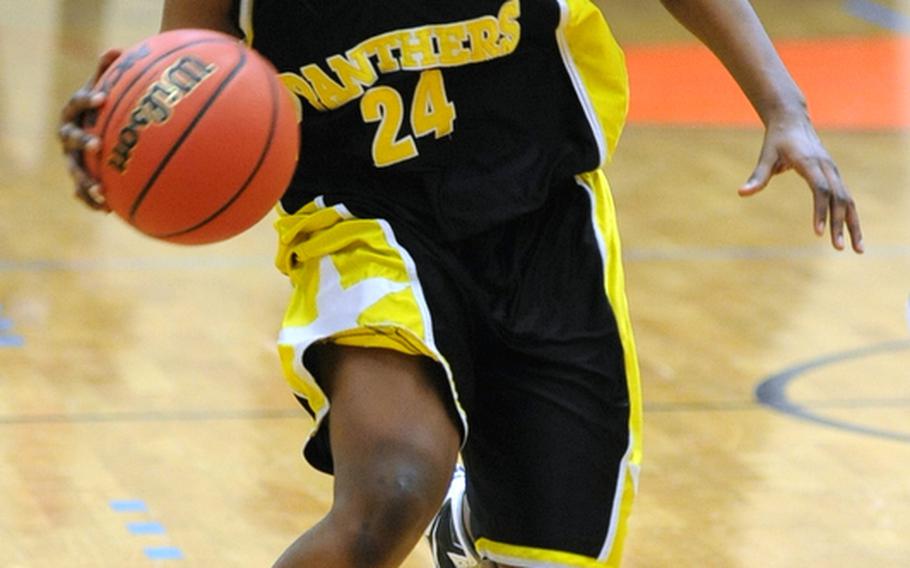 Buy Photo
Patch's Janelle Loney drives the ball up court in the Division I final against Vilseck in February. Loney and her fellow Lady Panthers will be out to defend their Division I title when DODDS-Europe 2011-12 season gets underway this weekend. (Michael Abrams/Stars and Stripes)

Buy Photo
Patch's Janelle Loney drives the ball up court in the Division I final against Vilseck in February. Loney and her fellow Lady Panthers will be out to defend their Division I title when DODDS-Europe 2011-12 season gets underway this weekend. (Michael Abrams/Stars and Stripes) 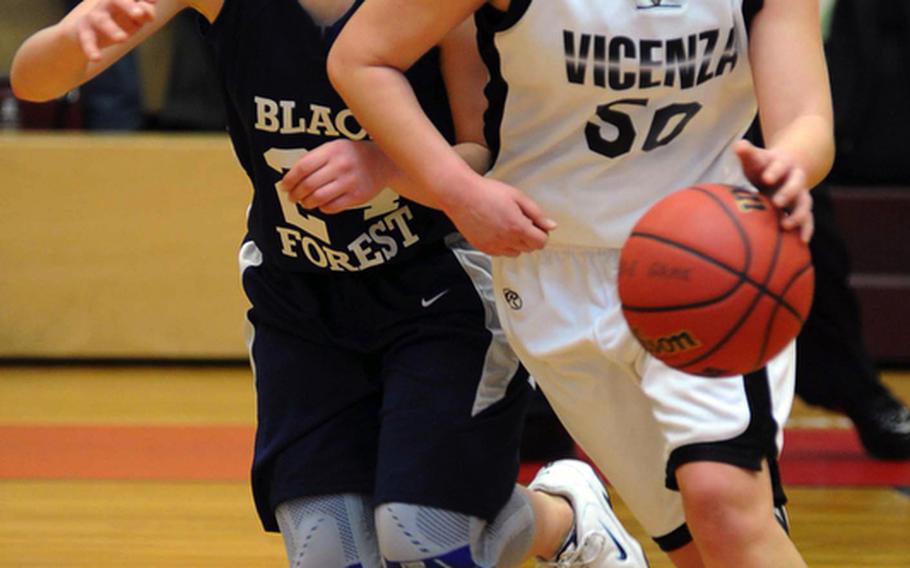 Buy Photo
Vicenza's Sella Pauling drives against Black Forest Academy's Natalie Bertrand in last season's Division II title game. Pauling will be returning for the defending champions when the DODDS-Europe 2011-12 season gets under way this weekend. (Michael Abrams/Stars and Stripes) 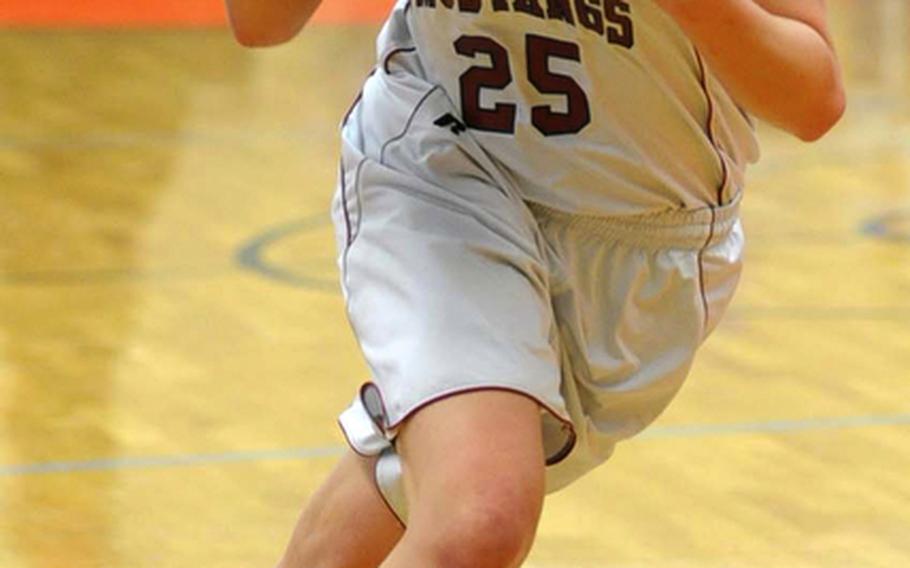 Buy Photo
Menwith Hill's Kaia Pierce drives up the court in a game last season. Pierce will be returning for the Mustangs as they try to defend their Division III title when the DODDS-Europe 2011-12 season gets under way this weekend. (Michael Abrams/Stars and Stripes)

The return of 2011 Stars and Stripes female basketball player of the year Janelle Loney for her senior season at Patch High School highlights what figures to be a season of remarkable continuity in DODDS-Europe girls&rsquo; basketball.

When the 2011-2012 season tips off Friday night at 11 venues stretching from the English midlands to Rome, Loney, a three-time All-European, will be the most heralded of the six returning all-stars from last season.

Mailoto moved back to the States for her final high school campaign, and Szybist, fresh off an All-Europe campaign for the 2011 European D-I volleyball champs, has opted to concentrate on that sport this winter, according to Ramstein coach Nathan Brewster.

Plenty of talent and plenty of contenders are back for another go. Especially at the top, where last year&rsquo;s European champions &ndash; Patch in D-I, Vicenza in D-II and Menwtih Hill in D-III &ndash; return nuclei of sufficient quality to put them well into the mix for repeat titles.

Division ILoney, who averaged 23.7 points, nine rebounds, five steals and four assists per game last season, will be attempting to help Patch&rsquo;s Lady Panthers repeat, and she won&rsquo;t be doing it alone, according to her coach John Kohut.

Kohut, who reported that 39 players turned out for tryouts, cited move-in Caitlyn Steffan, Mannheim transfer Brittany Hyde and All-Europe volleyball player Abigail Diaz as those bidding to join Loney and returnee Johanna Quinn in his line-up.

Patch most likely will be pushed by Ramstein, although All-Europe second-teamer Mackenzie Crews begins the season nursing a knee injury, and Vilseck, which returns the core of a team which was the last to defeat Patch. According to Vilseck coach Jim Hall, Sidni Beaulieu-Hains, Mariah Morris and Taylor Hall will anchor his squad.

Hall also pointed to Heidelberg, which returns All-European Rebecca Luna, Kaiserslautern and Lakenheath as potential contenders, and SHAPE&rsquo;s chances can&rsquo;t be discounted with the presence of volleyball all-stars Teresa Muldoon and Ashley Seiler in the lineup.

The schedule provides us with an early indicator of the D-I race. Ramstein journeys to Patch to open the season Friday night.

North of the Alps, Carter Hollenbeck returns to the sidelines at Baumholder, whose Lady Bucs again will coalesce around that other All-Europe sophomore, Dionna Marcus, and the initial Schweinfurt squad will try to blend talent which played last season at Bamberg, into a coherent squad, according to coach Julia Heintz.

Greenacre, who has returning starters in Brittany Dixon and Ariel Rogers along with newcomers Brianna Rogers and Stephanie Turner, sees Rota, led by Yesenia Solis, as the team to beat in D-III, although Bamberg looms large, too. The Lady Barons, according to coach Ethan Engel, have three returning seniors and energetic newcomers in sophomores Vanessa Sanders and Tiana Bowen.

Bamberg might benefit from a season spent playing larger schools in regional play.

&ldquo;We in all likelihood will take some lumps playing the large schools,&rdquo; Engel wrote about playing fellow Region III teams Patch, Heidelberg and Vilseck. &ldquo;It is important that we use these games as learning tools in preparation for the tournament.&rdquo;

The European girls&rsquo; tournaments will be held at Wiesbaden&rsquo;s state-of-the-art gyym. They are scheduled for Feb. 25.