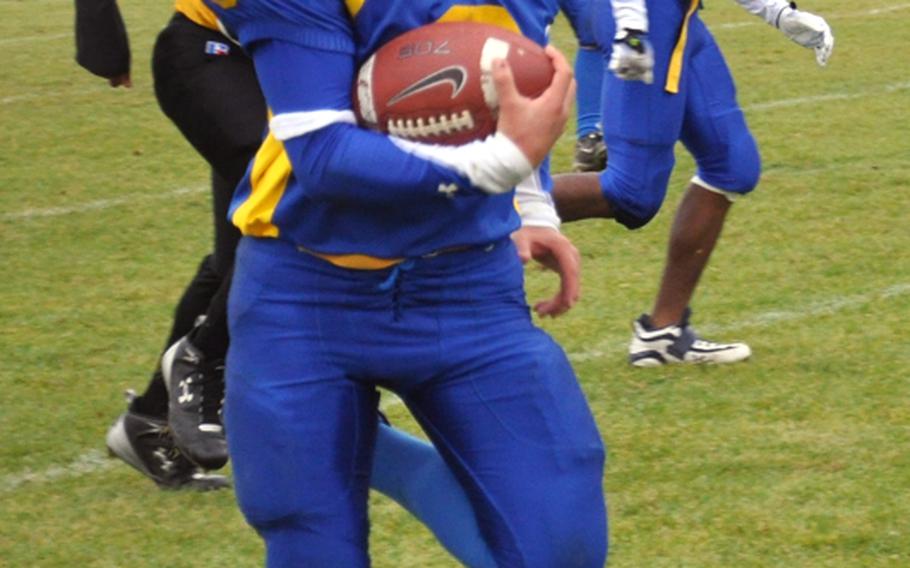 Buy Photo
Alex Moya heads downfield on a punt return for a touchdown in Ansbach&#39;s win over Vicenza last season. Moya, along with teammate Matt Jones, are two of only a few DODDS All-Europe returnees to the gridiron this season. (Dan Blottenberger/Stars and Stripes)

Buy Photo
Alex Moya heads downfield on a punt return for a touchdown in Ansbach&#39;s win over Vicenza last season. Moya, along with teammate Matt Jones, are two of only a few DODDS All-Europe returnees to the gridiron this season. (Dan Blottenberger/Stars and Stripes) 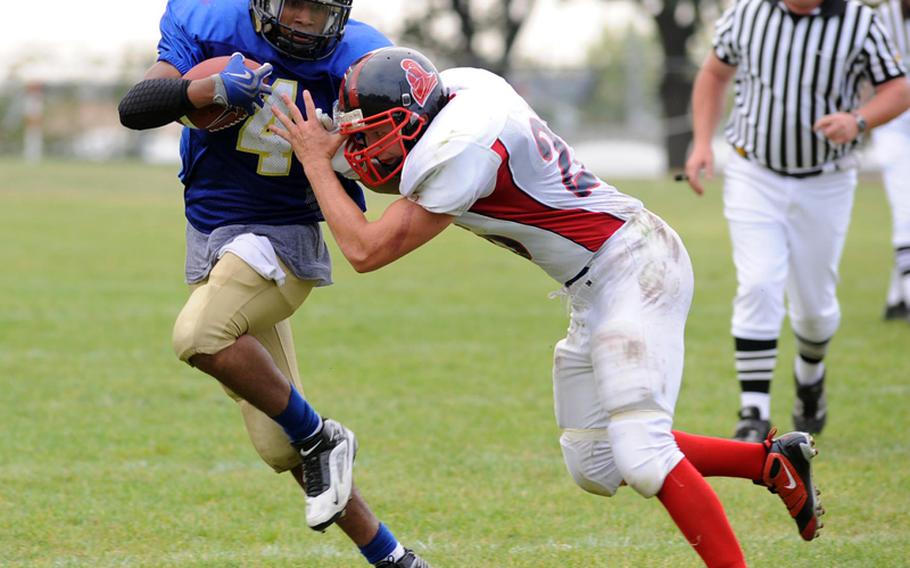 Buy Photo
Wiesbaden&#39;s Daniel Harris tries to get away from Lakenheath&#39;s Mitchell Christianson in a Division I DODDS-Europe game last season in Wiesbaden. Harris will be one of a few All-Europe returnees this season. (Michael Abrams/Stars and Stripes)

Even before the 2010 DODDS-Europe football season kicks off Friday with three night games, it&rsquo;s possible to cut to the final day.

The six teams that will take the field at Baumholder&rsquo;s Minick Field on Nov. 6 to settle the Divisions I, II and II championships are likely to have been there before.

That&rsquo;s especially true in Division II, where the consensus is that defending champion Bitburg will again face Ansbach, whose DODDS-record 31-game winning ended in a 19-6 defeat by the Barons last November. If the matchup happens, it will be Ansbach&rsquo;s record ninth-straight title game appearance.

Go ahead and count it, advises AFNORTH coach Greg Blankenship. &ldquo;I personally believe there is a 99.9 percent chance you will see a repeat of Ansbach vs. Bitburg in 2010,&rdquo; he wrote in an e-mail.

In Division I, 2009 runner-up Heidelberg is the consensus choice to make the finale, but perhaps not against defending champ Ramstein, whom the Lions beat in a preseason game.&ldquo;Heidelberg is definitely the team to beat,&rdquo; Ramstein coach Carlos Amponin, whose team was gutted by personnel losses in the offseason, confided after that game.

Defending champion Alconbury is in a Ramstein-like situation in the nine-man world of Division III, but despite the loss of several key players, the Dragons have more than 30 players out, a horde by D-III standards.

Structurally, 2010 will be a near-repeat of 2009, except for the addition of British sports academy team Filton to Division I-North. Eight schools will play D-I ball this fall, 12 will vie in D-II and five in D-III. One difference: The D-I schools will play only the teams in their conference during the regular season.

Here&rsquo;s a quick look at each team, with final records from last year in parentheses:

Division I-North&bull; Ramstein Royals (7-0): Coach Amponin will have to find replacements for seven departed All-Europeans along with two defensive players he thought would be strong candidates for this year&rsquo;s all-star squad.

&ldquo;This is a serious rebuilding year for the Royals,&rdquo; summarized Amponin, who added that his departees accounted for 94 percent of the Royals&rsquo; offensive yardage.

&ldquo;He is as good as any lineman I have coached,&rdquo; Martinez said.

&bull; Filton Pride (0-0): Pride coach Ben Herod, whose team is a part of the Bristol Sports Academy at Filton Academy, already has adjusted to DODDS rules &mdash; to his detriment.

&ldquo;We had five players who were too old,&rdquo; he said by telephone last week. &ldquo;That leaves us with 22-25 guys who can play.&rdquo;

Twenty-one of them have played American football before, Herod said, and all of them will be in shape. &ldquo;We&rsquo;ve had them up in Wales,&rdquo; he said, &ldquo;Running on sand.&rdquo;

&ldquo;At camp, we saw three very athletic groups of D-I kids &mdash; Heidelberg, Vilseck and Wiesbaden. We also saw the largest group of kids &mdash; Patch, so we are expecting a knock-down, drag-out fight within our division,&rdquo; he said in an e-mail.

&ldquo;Ramstein is the defending champ and Heidelberg has the experience,&rdquo; e-mailed coach Jim Hall, who returns DL Kaylen Smithson from last year&rsquo;s All-Europe team. &ldquo;We will work as hard as those two schools&hellip;.&rdquo;

&bull; Wiesbaden Warriors (3-4): Despite being the smallest school in the division, &ldquo;the Warriors are returning a strong group of athletes (10 junior-senior lettermen),&rdquo; coach Steve Jewell e-mailed. Most prominent among them is junior All-Europe RB Daniel Harris.

&bull; Patch Panthers (3-3): Coach Brian Hill continues to build a program with more than 100 hopefuls out for the team.

No one, however, can balance Bitburg, with several 300-pound linemen, on the scales. &ldquo;Bitburg is still huge,&rdquo; Baumholder&rsquo;s Carter Hollenback understated.

&bull; ISB Raiders (7-1): International School of Brussels &ldquo;is a disciplined team that reflects the professionalism of their coaching staff,&rdquo; according to AFNORTH coach Blankenship. &ldquo;They return athletic varsity players in all skill positions.&rdquo;

Gino Culotta, a 6-3, 210-pound running back who averaged 200 yards per game graduated, but ISB retains his younger brother, Vinny, &ldquo;a genetic replica&rdquo; of his sibling, according to Blankenship.

&bull; Mannheim Bison (3-3): &ldquo;Mannheim has a game-breaking receiver, strong interior linemen and a QB capable of running or throwing for first downs,&rdquo; observed Blankenship, who picked the Bison as a playoff contender in the school&rsquo;s final year despite having just 14 players on the roster.

Worse, Norwegian star and All-European Kewin Nielson will spend his senior year in Mississippi, placed there by Bodine. &ldquo;We helped him transfer,&rdquo; Bodine said, &ldquo;So he could earn a college scholarship.&rdquo;

&bull; Bamberg Barons (3-4): Experienced, talented team should contend for playoffs, according to Blankenship, who cautioned, however, &ldquo;It takes time to build a championship-caliber team.&rdquo;

&bull; Vicenza Cougars (6-2): &ldquo;We graduated a lot of starters and will be a relatively young team&hellip;,&rdquo; coach Adam Ridgley said in an e-mail.

&bull; Naples Wildcats (1-4): &ldquo;Naples is going to be an inexperienced team this season,&rdquo; said coach Dirk Lambertson, on the eve of his second season at the school.