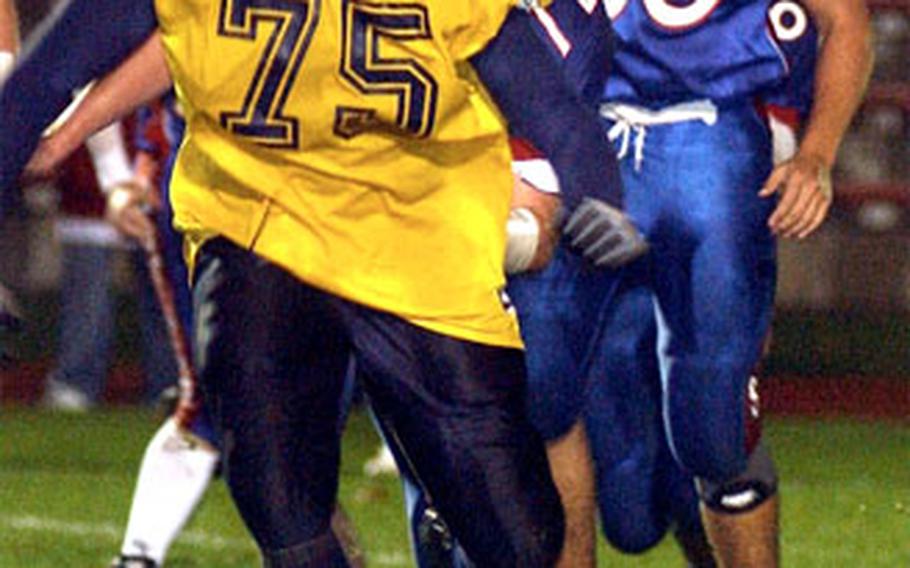 Heidelberg’s Brandon Simmons follows a play on defense during the Division I championship game in Baumholder in November. Simmons was named to the 2005 DODDS All-Europe team on offense and defense for the second straight year. (Michael Abrams / S&S)

The panel of coaches &#8212; Gregg Blankenship of AFNORTH, Sam Cassou of Division II champion Hanau, Marcus George of Ansbach, Steve Jewell of Wiesbaden, Glenn Porter of Ramstein and Shawn Rodman of Division III champion Hohenfels &#8212; produced a team shaped and staffed like no other in recent memory.

&#8220;I think we chose the best players to represent DODDS-Europe football,&#8221; Cassou wrote in an e-mail to Stars and Stripes.

&#8220;The process was difficult after some of the obvious choices were selected, due to the large pool of very good players.&#8221;

The &#8220;obvious choices&#8221; to whom Cassou referred are the 2005 squad&#8217;s nucleus of repeat selections. They are led by three-time All-European Brandon Simmons of Heidelberg, a two-way choice for the second straight season.

The other returning selections are Heidelberg tailback Lewis Allen; record-breaking running back Malcolm Lane of Hanau, a two-way pick for the first time this season; Patch quarterback J.D. Lindsay, and running back Philip Lipman of International School of Brussels. All five are seniors.

Simmons, an offensive lineman and linebacker pick from Heidelberg&#8217;s Division I champs, &#8220;could take control of the game&#8221; from either side of the ball, according to Jewell.

However, for the first time this century, sophomores outnumbered repeat selections. Running backs Cyril Borden of Ramstein, Stephen Washington of Hohenfels and Corey Legister of Bitburg, receiver Archie Barnes of Patch, offensive lineman Randall Pelletier of Bitburg and place-kicker Justin Wiehe of Ramstein personified a trend that is likely to continue, according to Ansbach&#8217;s George.

&#8220;Six freshmen and six sophomores started for us,&#8221; he said. &#8220;With smaller school populations, sophomores who might in the past have sat while seniors played in front of them got a chance to play.&#8221;

But the 2005 sophomore selections didn&#8217;t make All-Europe by default or a lack of seniors, George emphasized.

Wiehe&#8217;s contributions to Ramstein appeared on the scoreboard. He booted five field goals, the longest 38 yards and &#8220;has much more potential,&#8221; according to his coach, Porter.

With 33 seniors on the 2005 squad graduating and the drawdown continuing, expect more youthful players to emerge as stars next year, George said.

And so is the All-Europe football team. Look for the trend to continue in 2006.