Naples comes out on top in defensive battle 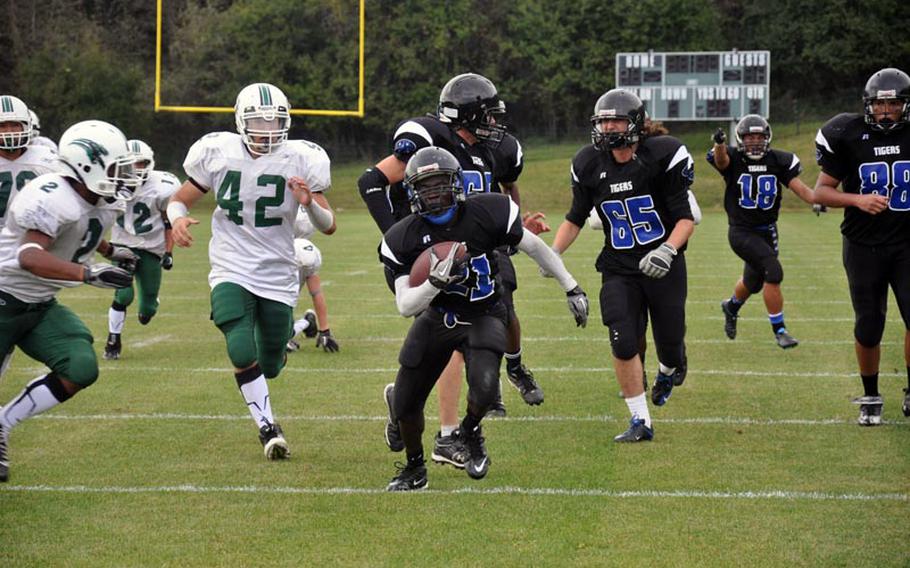 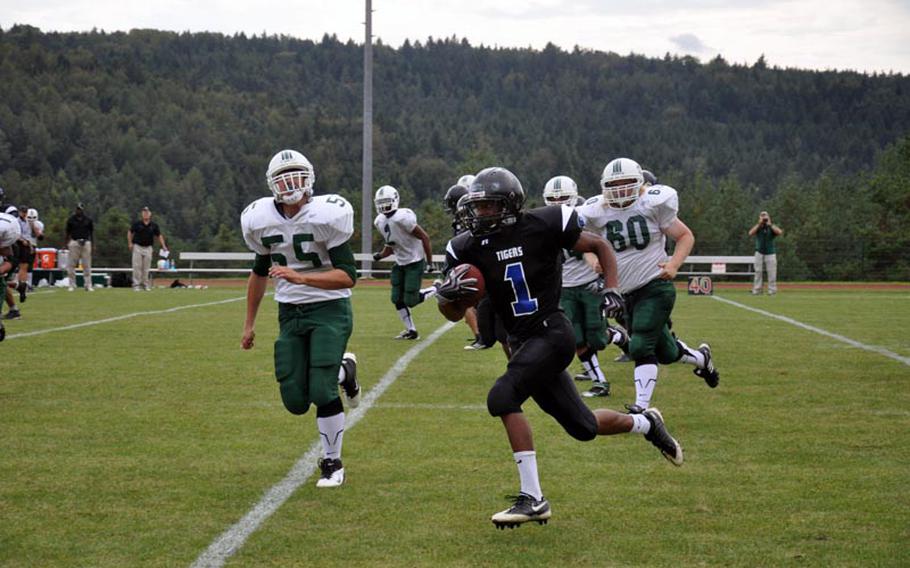 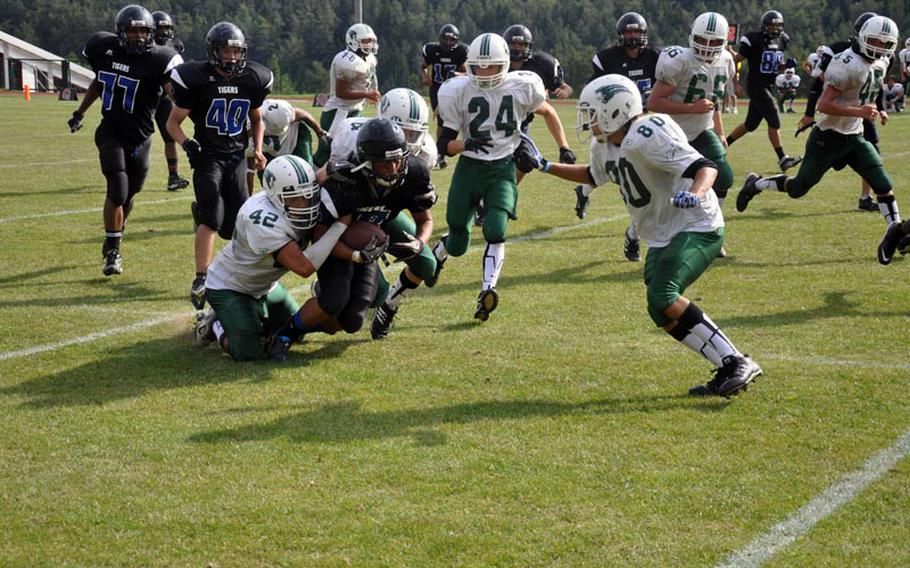 Buy Photo
Hohenfels senior Jean Aquino is brought down by a gang of Naples defenders Saturday during the Tigers 19-12 loss to the visiting Wildcats. (Dan Blottenberger/Stars and Stripes) 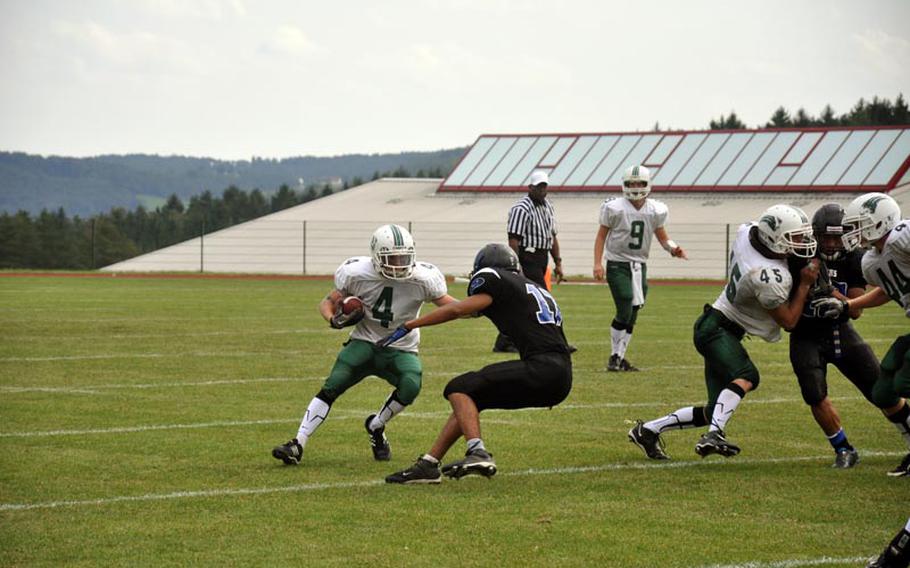 HOHENFELS, Germany &ndash; The 19-hour bus trip from Italy proved worthwhile for the Naples Wildcats thanks to a 19-12 opening-day football win Saturday over the Tigers.

The defensive battle saw 15 points scored in the first half with all but an extra point coming from the defense.

Naples coach Dirk Lamberston gave most of the credit for the win to his defense, whom he says has been among the best in Europe the last two years.

&ldquo;We were just trying to get pressure on the backfield and it ended up working for us,&rdquo; said Sam LeVault, who led the team in tackles. Pressure is definitely what the Wildcat defense brought, scoring both of their first two touchdowns on fumbles recovered in the Tiger&rsquo;s endzone. The scores were recorded by David Arrequin and Zack Cheek.

Despite the win, &ldquo;ugly&rdquo; is how Lambertson described his team&rsquo;s first game of the season.

&ldquo;We kept shooting ourselves in the foot,&rdquo; Lambertson said. &ldquo;We settled down in the second half and started running the ball really well.&rdquo;

One of those mishaps took place on Naples&rsquo; first possession, when junior quarterback Joseph Pitts mishandled the snap. The fumble was recovered by Hohenfels senior standout Jean Aquino, who returned the ball 25 yards for a touchdown. Aquino made plays on both sides of the ball throughout the game.

After a failed extra point, Naples marched down the field only to miss a 21-yard field goal attempt. Arrequin then gave his team the lead by kicking an extra point following his fumble recovery in the endzone.

Naples&rsquo; 7-6 lead would not last long. On the ensuing kickoff, Hohenfels senior Xavier Davis got loose up the middle for a touchdown giving his team a 12-7 lead.

&ldquo;I just followed my lead block and saw a hole open up in the middle,&rdquo; Davis said.

Naples&rsquo; second score came when Tigers quarterback Gilbert Pinckney sent a pitch loose in the endzone to be recovered by linebacker Cheek. After missing the extra point, the halftime score was 13-12.

The defensive battle continued in the second half. Pinckney left the game in the third quarter with a hip injury, forcing the Tigers to move to a new method of offense. Several players alternated standing behind center and ran the ball.

With a chance to retake the lead, Hohenfels lined up for about a 30-yard field goal only to have the kick blocked by Naples freshman Makua Camarao.

After forcing a turnover on downs, Hohenfels got the ball back but eventually turned the ball over on downs. The chains had to be used to confirm that a fourth-down attempt failed.

Naples then began a 60-yard drive with less than 7 minutes in the game that ended with Pitts connecting with Bryan Pfirrmann from 6 yards out.

A bad snap put Hohenfels in fourth-and-long on its final possession and it failed to convert again.

Following the game, Tigers coach Ed Lynch gave his team a grade of C-minus. He noted room for improvement on his offensive line, which was overwhelmed by the aggressive Naples defense.

&ldquo;We did better against them this year than we did against them last year,&rdquo; he said. &ldquo;Last year they beat us 39-0.&rdquo;

CorrectionHohenfels senior Xavier Davis was incorrectly labeled a sophomore in an earlier version of this article.