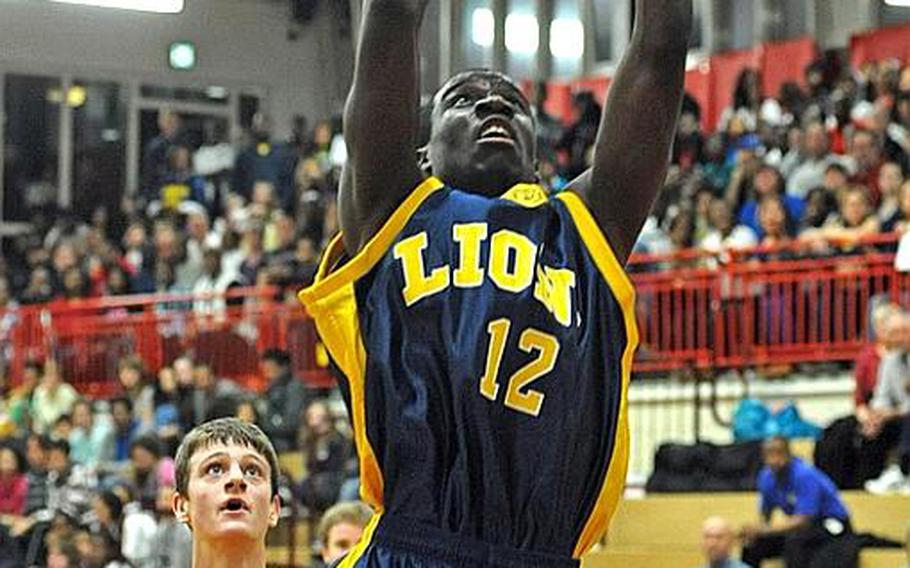 Heidelberg's Eugene Jones scores in last season's Division I championship game loss to Ramstein. The senior is hoping that this year the Lions can take the title - and he skipped football to polish his basketball skills to help them do it. (Michael Abrams/Stars and Stripes)

HEIDELBERG, Germany &mdash; Life&rsquo;s all about choices, and Heidelberg All-Europe senior guard Eugene Jones is convinced he made the right one.

&ldquo;Basketball is my passion,&rdquo; Jones, an 18-year-old, 6-foot guard said about his decision to forgo football this year to concentrate on basketball. &ldquo;I wanted to come out on top in my last year.&rdquo;

Jones, who played wide receiver, safety and cornerback for the 2009 European runner-up football Lions, could already have come out on top had he suited up for football again this year. The undefeated Lions won the European Division I football crown, beating Wiesbaden, 23-20, in double overtime in last month&rsquo;s title game.

Asked whether he entertained any second thoughts about skipping football as the Lions rolled to the title, Jones shook his head firmly.

&ldquo;Basketball is my passion,&rdquo; he reiterated. &ldquo;Football is just something I happened to be good at. I&rsquo;m happy for them, but nothing that happened made we want to play again.&rdquo;

That&rsquo;s far from the case with basketball. Jones, who also holds down a job as a commissary worker, spent what little free time he has honing his basketball skills instead of putting on the pads.

&ldquo;I&rsquo;ve been working on basketball since last spring,&rdquo; said Jones, a 14.6 points-per-game scorer last season. &ldquo;I go to the gym anytime I can on my own for three or four hours. I work on shooting, defensive drills, layups and crossovers. I&rsquo;m trying to improve my entire game.&rdquo;

The process has produced progress, according to Heidelberg coach Ron Merriwether, a former European champion player and coach at defunct Giessen.

&ldquo;Thus far, he&rsquo;s playing with a lot more confidence and patience,&rdquo; Merriwether said of Jones after two opening-weekend victories on the road. &ldquo;It shows how much better a player he&rsquo;s become.&rdquo;

Merriwether thinks skipping football has played a big part in Jones&rsquo; improvement. &ldquo;As a former three-sport athlete myself, I know how the rust can build up,&rdquo; he said. &ldquo;When you play football, you don&rsquo;t have time even to pick up a basketball. Your timing&rsquo;s off.&rdquo;

Both Merriwether and Jones are pleased that Jones&rsquo; scoring is down slightly from last season &mdash; he&rsquo;s averaging 11 points after two games.

&ldquo;The part of the game I enjoy most isn&rsquo;t scoring,&rdquo; said Jones, whom former Lions coach Brad Shahan called his team&rsquo;s most effective defensive player. &ldquo;It&rsquo;s playing defense, passing off and motivating my teammates. I don&rsquo;t want this year to be a repeat of last year.&rdquo;

Added Merriwether about Heidelberg&rsquo;s leading scorer last year, &ldquo;I look for him to take the lead in other ways. He&rsquo;s a good level-headed leader. You can&rsquo;t go wrong with a player like that. He plays with a chip on his shoulder &mdash; not a chip about his entitlement as a returning star, but a chip about winning.&rdquo;

One of Jones&rsquo; goals for the season is to reverse the outcome of the last two European title games, both losses to Ramstein. Heidelberg downed the Royals 59-45 on Saturday behind 12 points, six assists and four steals by Jones. The previous day, the Lions beat Kaiserslautern 89-70.

&ldquo;There&rsquo;s a lot work to be done,&rdquo; the coach said about his first edition of the Lions. &ldquo;There&rsquo;s always room for improvement, but we&rsquo;ve been working hard, and the kids have bought into the system. Now they can see that everything we told them came true.&rdquo;