Florence's Giulio Pandolfi, left, toes the ball past Rota's Austin Hall and into the goal in Florence's 3-0 win over the Admirals in the boys Division III final at the DODDS-Europe soccer finals. (Michael Abrams/Stars and Stripes)

Florence's Giulio Pandolfi, left, toes the ball past Rota's Austin Hall and into the goal in Florence's 3-0 win over the Admirals in the boys Division III final at the DODDS-Europe soccer finals. (Michael Abrams/Stars and Stripes) 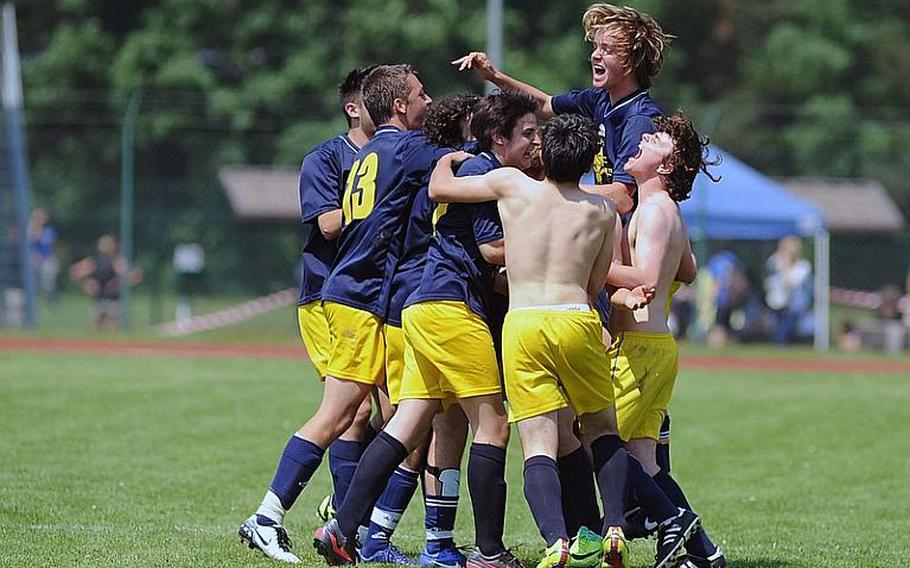 The Florence boys celebrate their Division III title at the DODDS-Europe soccer championships after defeating Rota 3-0. (Michael Abrams/Stars and Stripes) 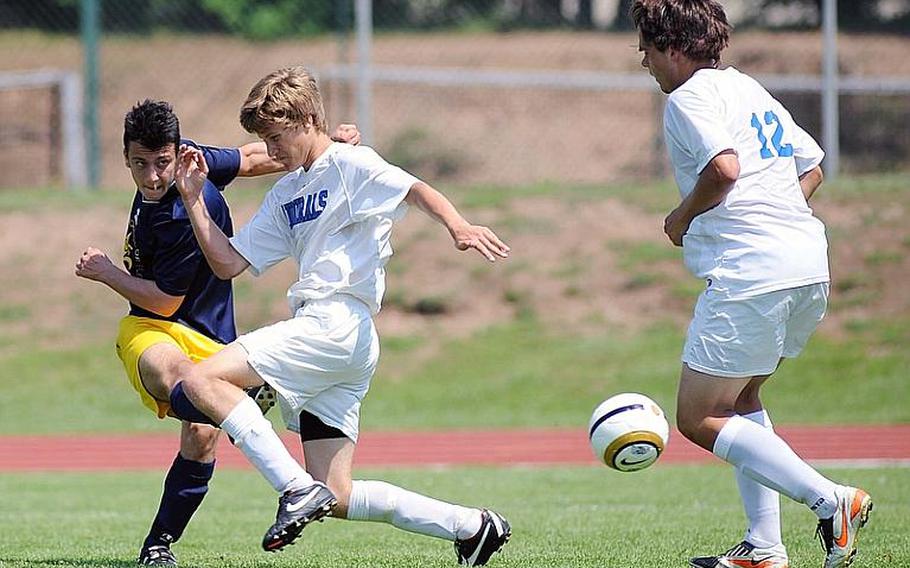 Florence's Lorenzo Maestrelli shoots the ball between Rota's Matthew Gramkee and Cody Holland for a goal in the boys Division III final at the DODDS-Europe championships. Florence won 3-0 to take the crown. Maestrelli was named tourney MVP. (Michael Abrams/Stars and Stripes) Rota keeper Keaton Regenor pulls in the ball ahead of a charging Giulio Pandolfi in the boys Division III final at the DODDS-Europe championships. Florence won 3-0 to take the crown. (Michael Abrams/Stars and Stripes)

RAMSTEIN AIR BASE, Germany &ndash; The city kids from the International School of Florence capped a dizzying ascent from a 1-5-1 Region IV season with a 3-0 victory over Rota in Thursday&rsquo;s Division III championship soccer game.

What they do have, however, is a collection of young, skilled players. Chief among them is junior striker Lorenzo Maestrelli, who scored ISF&rsquo;s first two goals. He collected the first when he beat diving Rota keeper Keaton Regenor to a bouncing ball as it hopped into the box three minutes into the game. He added the second one after intermission by using his substantial dribbling skills against near-blanket coverage from the left sideline into the Rota box, where he launched a low shot inside the near post between two Rota defenders.

&ldquo;We have many individual players,&rdquo; Clausi explained about his team, which got its third goal Thursday on a stellar individual effort by Giulio Pandolfi at game&rsquo;s end, &ldquo;but today we played as a team.&rdquo;

Florence wasn&rsquo;t able to do that during a regular season highlighted by a lone victory, 7-3 over visiting and winless Aviano, and a 5-5 tie against visiting Vicenza, the fourth-place finisher in the D-II tournament. The poor regular season, admittedly worsened by having to take on defending D-II champion Marymount and 2011 D-II silver-medalist and 2012 D-II bronze medalist American Overseas School of Rome, earned ISF the No. 8 seed among the 10 teams in the field.

&ldquo;We had a lot of injuries,&rdquo; Clausi said. &ldquo;And we had a lot of IB (international baccalaureate) kids who couldn&rsquo;t make the two-day trip to Sigonella (a 6-2 loss).&rdquo;

All of the IB players and all but one of the injured, however, made it here for the D-III event. ISF went through pool play 2-0-2, with the victory a 3-1 conquest of top-seeded Alconbury and one of the ties a 5-5 shootout against Rota on Tuesday.

ISF then blanked Brussels 6-0 in Wednesday&rsquo;s semifinals, and all the shooting in Thursday&rsquo;s Rota rematch came from Italy-based attackers. Florence keeper Nikolas Antonorsi had to make just three saves all day, none of them of any difficulty.