Buy Photo
Heidelberg's Lena Maieritsch connects for a hit to drive in two runs in the Lions' 8-7 win over Mannheim on Friday. Maieritsch went 3-for-3 in the game. (Michael Abrams/Stars and Stripes)

Buy Photo
Heidelberg's Lena Maieritsch connects for a hit to drive in two runs in the Lions' 8-7 win over Mannheim on Friday. Maieritsch went 3-for-3 in the game. (Michael Abrams/Stars and Stripes) 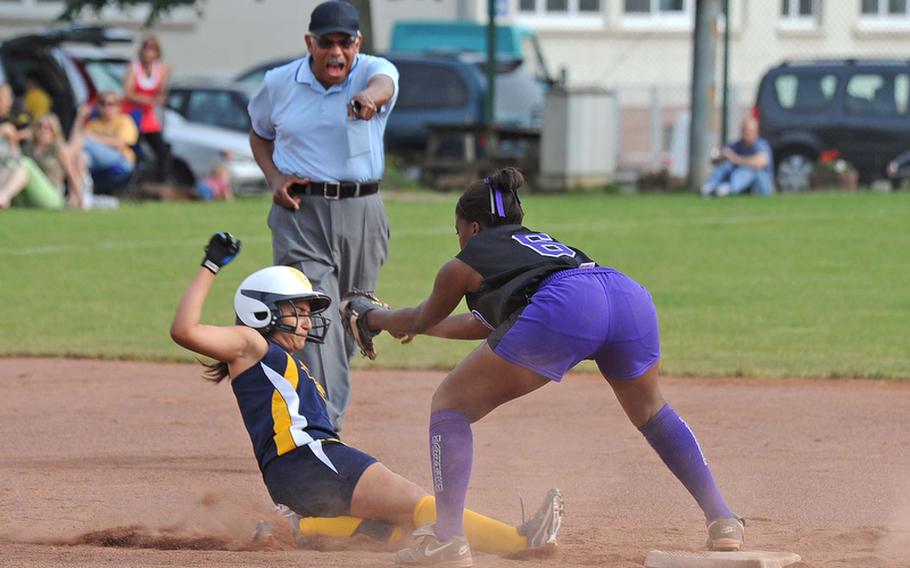 Buy Photo
Mannheim's Erica Bryant puts the tag on Heidelberg's Lexi Taverez after Taverez was caught off base on a fly ball. Making the call is umpire Tomas Villegas. (Michael Abrams/Stars and Stripes)

Buss&rsquo; blow broke a 7-7 Game 2 tie, and she scampered home with the eventual game-winning run on Lena Maieritsch&rsquo;s fielder&rsquo;s choice-grounder as Heidelberg won the final two athletic contests ever to be played between the longtime rivals. Mannheim is scheduled to close its doors forever next month.

&ldquo;There was a little bit of pressure,&rdquo; Buss said about her impact at-bat, adding that knowledge that this would be the last time Mannheim and Heidelberg would play each other made the evening &ldquo;intense.&rdquo;

With the two-hour time limit looming and Mannheim ahead 7-6, Aileen Donnelly led off with the first of five bases on balls Piniero would give up in the frame. Donnelly, the winning pitcher in Heidelberg&rsquo;s 8-7 Game 1 victory Mannheim, stole her way around the bases to get the game tied and set the stage for Bliss.

As it had in Game 1, Mannheim mounted a last-inning rally of its own.

Catcher Brittany Hyde, who earlier in the game had tripled in a run, hit a fly to right that Heidelberg misplayed into a two-run, three-base error that made the score 11-9. Erica Bryant then singled home pinch-runner Cynthia Brand to cut Mannheim&rsquo;s deficit to a single run, but Heidelberg catcher Briana Bronnell picked Bryant off first to end the game.

But she battled back by allowing just five hits and striking out two.

&ldquo;We couldn&rsquo;t let our mistakes beat us,&rdquo; she said about her grind-it-out performance.

In Game 1, Donnelly allowed six hits and struck out seven in her route-going six innings.

Mannheim, which spotted Heidelberg a 3-0 first-inning lead built around five walks and an error, trailed 7-3 after five innings. A two-run single by Amber Lacouture, a run-scoring grounder by Hyde and Joanna Phillips&rsquo; RBI single in the top of the sixth, however, got the Lady Bison even.

But Heidelberg wasn&rsquo;t interested in extra innings. Maieritsch opened the bottom of the inning with an infield single, stole second, then scored the game-winner on Del Tufo&rsquo;s double to center field.

Heidelberg evened its season mark at 5-5 with the sweep; Mannheim fell to 0-6.

Next up for Heidelberg is home doubleheader May 14 against Wiesbaden; Mannheim is to entertain Hohenfels the same day.