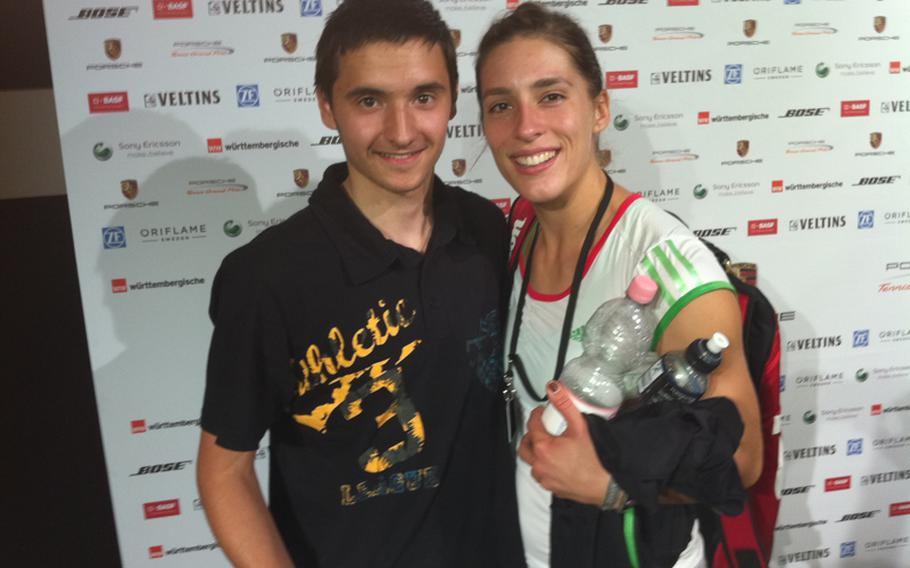 DODDS-Europe tennis champion Ajdin Tahorovic of Patch High School and German pro Andrea Petkovic get together at the recent Porsche Open tennis tournament in Stuttgart, Germany. Both players are of Bosnian descent. (Courtesy of Walter Fritz)

If you're as talented a tennis player as 2010 DODDS-Europe singles champion Ajdin Tahirovic of Patch High School, chances are good you'll get an inside look at the top of your sport when the pros come to town.According to Patch tennis coach Walter Fritz, that's what happened to Tahirovic, a Bosnian-born freshman, who got to meet former champ Mats Wilander of Sweden and two current German female pros at this year's recent Porsche Open tournament in Stuttgart.Fritz reported Wilander advised Tahirovic, who won his European title 6-1, 6-2 over Patrick Tan of International School of Brussels last October, to have fun with the game, and that any professional opportunities would follow naturally.Fritz added that Tahirovic also chatted, in Bosnian, with Germany's No. 1-ranked woman, Andrea Petkovic, and with another female pro, Sabine Lisicki. According to Fritz, Lisicki, who helped Germany defeat the U.S. in last year's Fed Cup, offered to come to Patch Barracks and hit balls with Tahirovic.