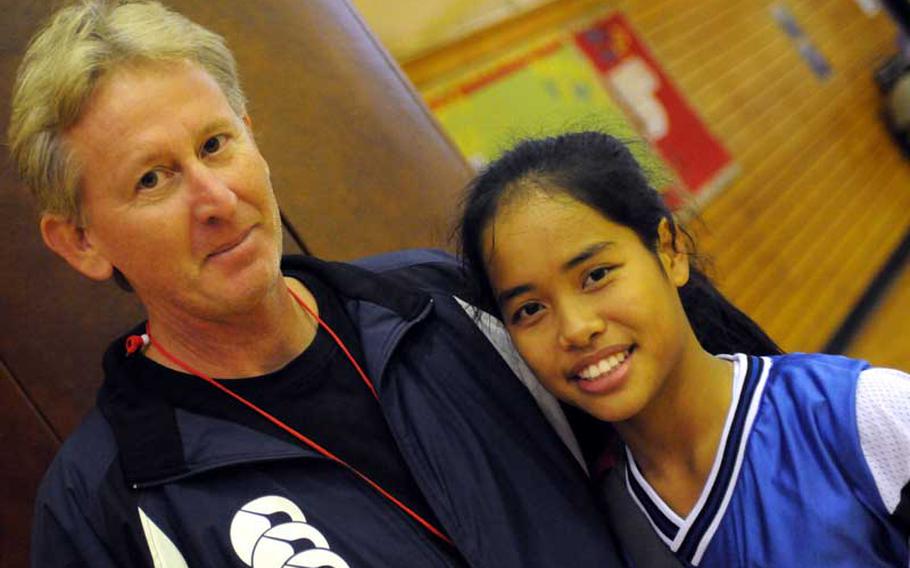 Yokota girls basketball coach Paul Ettl and his daughter and starting guard, junior Erika Ettl, are hoping the Panthers have a strong season. (Photo by Dave Ornauer/Stars and Stripes)

Repeatedly during her first two years in high school, Erika Ettl would come home from Yokota High School basketball practice with a &ldquo;pained expression&rdquo; on her face, her father Paul said. The kind when a child falls down, sees the parent there and breaks out in tears.

Without her saying so, both daughter and father said, Erika wanted Paul to coach the Panthers girls &ndash; a rare opportunity for parent and child, but one that brings with it a mixed bag of good and challenging things.

The good: Spending more time working together with each other. The challenging: Taking a chance on players or parents muttering invectives about nepotism and favoritism.

&ldquo;Most parents don&rsquo;t get that opportunity, and I&rsquo;d been thinking the past couple of years that if I didn&rsquo;t try it, that I would regret it one day,&rdquo; said the elder Ettl, who&rsquo;d coached Yokota&rsquo;s boys for seven seasons before taking the girls coaching post this season.

&ldquo;I had an opportunity &hellip; to coach the girls, to try to make her experience a little bit different. I just couldn&rsquo;t sit on my hands and not take that shot.&rdquo;

From the time he first said he&rsquo;d switch from the boys to the girls team, &ldquo;I was really excited,&rdquo; Erika said. &ldquo;I&rsquo;m used to him being there. Through all my basketball years, he&rsquo;s been there. I wanted him to coach me from the start of my high school years, for me to be a better person and player.&rdquo;

The results have been mixed to this point: Yokota began the DODDS Japan season with three wins at E.J. King, before losing all five games it played in the 41st Hong Kong International School Holiday Tournament.

So far, there&rsquo;s been no grumbling &ldquo;that I know of,&rdquo; Paul said. &ldquo;We may end up laying an egg this year. But that comes with the job. I&rsquo;m going to play the people who I think give us the best chance to improve and win and if they look at it as me playing favorites, that&rsquo;s up to them.&rdquo;

One can&rsquo;t argue with the pedigrees of both player and coach.

Erika, meanwhile, has averaged 19.5 points, six assists, three steals and five assists in her two-plus seasons for Yokota&rsquo;s girls. The Panthers went 20-8 with a sixth-place Division I Tournament finish in her freshman year before they slumped to 13-13 last season.

In one respect, Paul Ettl said he &ldquo;felt a little bad&rdquo; taking over the girls team because of whom he replaced &ndash; three-time All-Air Force guard Ric Cabral, &ldquo;because he&rsquo;s a friend. When I coached his kid, he never complained when Andreas didn&rsquo;t start, always handled it with class.&rdquo;

For his part, Cabral &ndash; who works at the school but is not a teacher &ndash; admits he &ldquo;misses coaching,&rdquo; but he doesn&rsquo;t have a problem with the move. &ldquo;If I had an opportunity to coach my son, I&rsquo;d jump at it.&rdquo;

While returning seven players from last year&rsquo;s team, Yokota also has just one senior, and Paul Ettl sees his daughter as the one to take charge at point guard her next two seasons.

&ldquo;Arguably, I don&rsquo;t see anybody on the team who&rsquo;s better&rdquo; at her position, he said. &ldquo;And if you asked 100 people, I&rsquo;d bet about 99 would say the same thing.&rdquo;

It&rsquo;s dealing with that 1 percent, however. &ldquo;As a teacher, you&rsquo;re not going to please everybody. As a coach, that&rsquo;s just the way it goes. I&rsquo;ll address concerns and listen to complaints as they come up, but I think we have supportive parents at Yokota, and so far, so good.&rdquo;

Erika could score 60 points per game if she wanted, but she prefers to get all her teammates involved, Paul said.

&ldquo;She sees that the only way we can win or achieve success is if everybody improves and it&rsquo;s a team thing,&rdquo; he said. &ldquo;The rising tide raises all boats. The whole level of the team has to come up and if she &hellip; becomes too selfish, that&rsquo;s not going to happen.&rdquo;

Teammates don&rsquo;t seem to have much problem with coach or daughter.

Julia Marrin, the Panthers&rsquo; lone senior, said of Erika: &ldquo;She&rsquo;s really supportive, doesn&rsquo;t want us to give up. When we&rsquo;re going badly, she tells us what we need to do.&rdquo;

Erika says she knew there would be no playing favorites. &ldquo;He&rsquo;s the coach and he has to treat all the players the same way,&rdquo; she said.

Whether the arrangement will lead to Division I Tournament hardware remains to be seen, Paul Ettl said. He&rsquo;s expecting two new players to come in and contribute.

&ldquo;If we put it all together, who knows?&rdquo; he said. &ldquo;If we improve and get something from these other pieces, these new kids, we&rsquo;ll be OK.&rdquo;