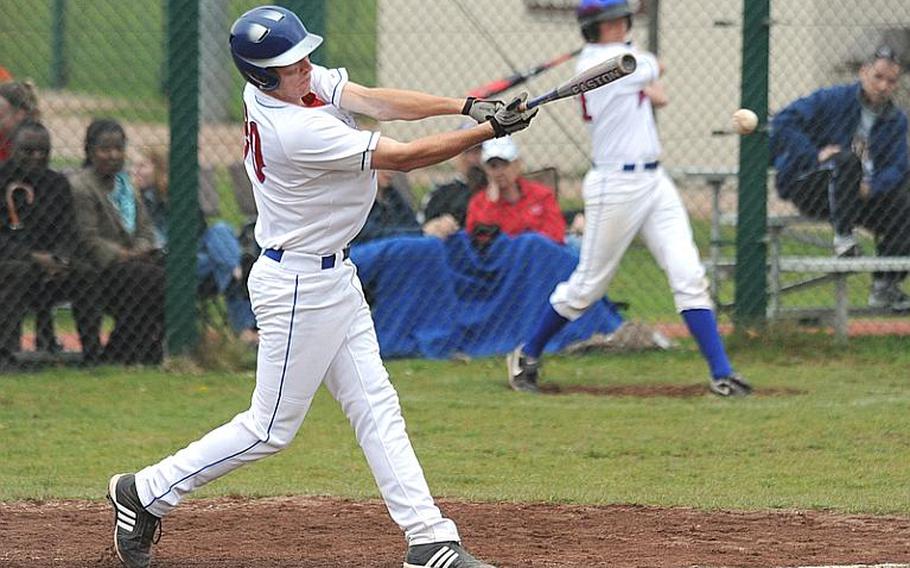 Buy Photo
Ramstein's Josh Sloan connects in a game against SHAPE on May 8. Sloan, one of several big hitters in the Royals lineup, is batting .542 with 13 singles, 10 doubles, two triples and a home run. (Michael Abrams/Stars and Stripes)

Buy Photo
Ramstein's Josh Sloan connects in a game against SHAPE on May 8. Sloan, one of several big hitters in the Royals lineup, is batting .542 with 13 singles, 10 doubles, two triples and a home run. (Michael Abrams/Stars and Stripes) 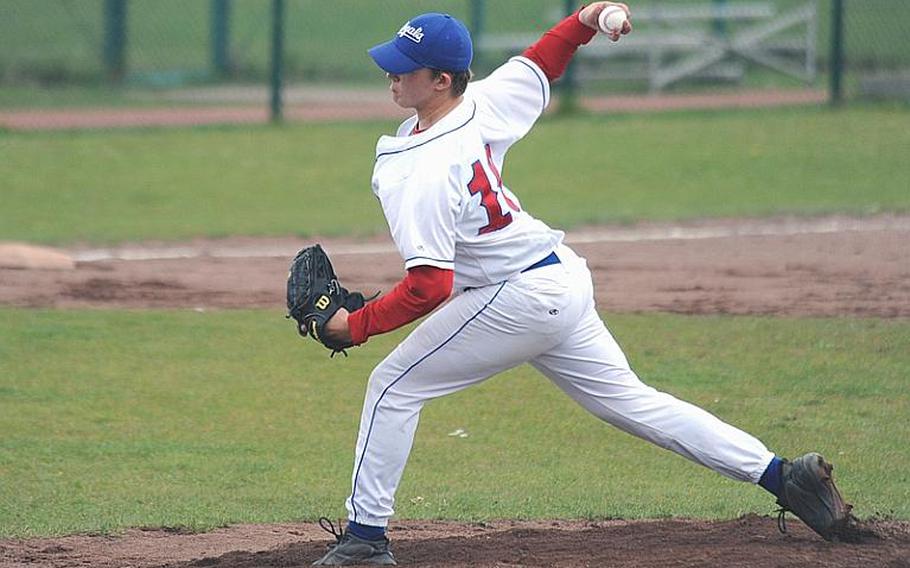 Buy Photo
Ramstein hurler Jon Groteleuschen, a strikeout pitcher, delivers during a victory against SHAPE on May 8. (Michael Abrams/Stars and Stripes)

Two is the dominant number as the DODDS-Europe baseball tournaments open their three-day run Thursday at Ramstein Air Base and Kaiserslautern, Germany.

That&rsquo;s fitting, since high school baseball is winding up its second season as an official DODDS sport. This year, moreover, there are two titles on the line. Because only two Division III-sized schools &mdash; Sigonella and Rota &mdash; play baseball, they&rsquo;ll join six D-II teams in a combined D-II-III event.

The final pre-tournament deuce comes in the Division I event, which appears to be a two-team race between defending champion and top-seeded Ramstein (10-0 in regional play) and unbeaten No. 2 seed Patch.

Here&rsquo;s a rundown of each tournament:

Division I: Ramstein coach Glenn Porter has All-Europeans Josh Sloan (.542 BA) and Matt McDonald (.452) back, along with Shane Foley (.421), and has added the Groteleuschens, Drew (.450) and Jon (20 strikeouts in 12 innings). But he said in an e-mail Monday that he still isn&rsquo;t buying any notions of a two-team race.

&ldquo;I can easily see some upsets in pool play with quick, short games,&rdquo; he said of games that are limited to 90 minutes. &ldquo;You can&rsquo;t underestimate anyone in the tournament.&rdquo;

No. 3 Heidelberg needs to tighten its defense to challenge the top two, according to coach Berry Patrick, whose team lost 11-2 and 10-2 to Patch last Saturday to close the regular season at 9-3.

&ldquo;While we were disappointed with our losses to Patch,&rdquo; Patrick said in a Wednesday e-mail, &ldquo;the losses were really us beating ourselves with errors&hellip;. [We] think we will do much better the next time we face them.&rdquo;

No. 4 Vilseck (9-3) should make some noise behind pitchers Kyle Krajkcovic and Tyler Hall, both All-Europeans last season. Like Heidelberg, Vilseck will have to find a way to reverse two double-digit losses to Patch to emerge as D-I champs.

Division II-III: Bitburg&rsquo;s the defending D-II champion, but the Barons struggled this season in the absence of All-Europe pitcher Matt Less, out with a shoulder injury. The entire field will be short the former No. 6 seed, Bamberg, which had to withdraw this week when its roster shrank to only nine players.

Each team has beaten the other this season. If they meet again, it would be in the final.

Rota, a D-III school that traveled to Germany to win the European high school-age title in 2007 when baseball was a Youth Activities-sponsored sport, is looking forward to throwing all-D-III tournament players Cameron Henry, Alex Kase and Tim Morgan in against stiffer competition.

&ldquo;The kids are excited to play the bigger schools in D-II,&rdquo; coach Robert Stovall said in a Tuesday e-mail. &ldquo;They are a little worried about the faster pitching and bigger bats that go along with the bigger teams, but are happy to get to travel and finally get some games against American teams.&rdquo;

Play begins at 8 a.m. Thursday in both events. Championship games are scheduled for Saturday. There is no admission charge.

Where: Ramstein and Kaiserslautern

What&rsquo;s at stake: Division I and II-III titles