Daegu getting a kick out of female football player 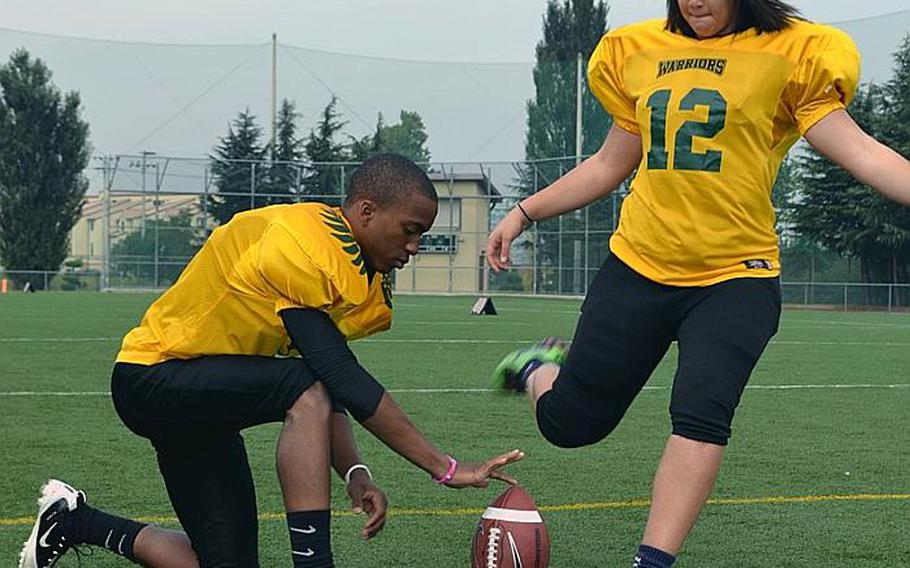 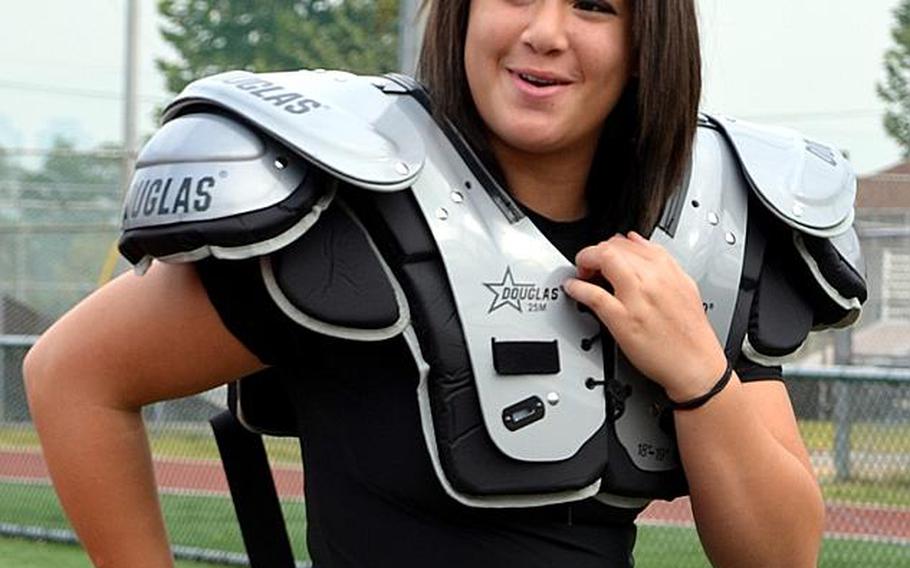 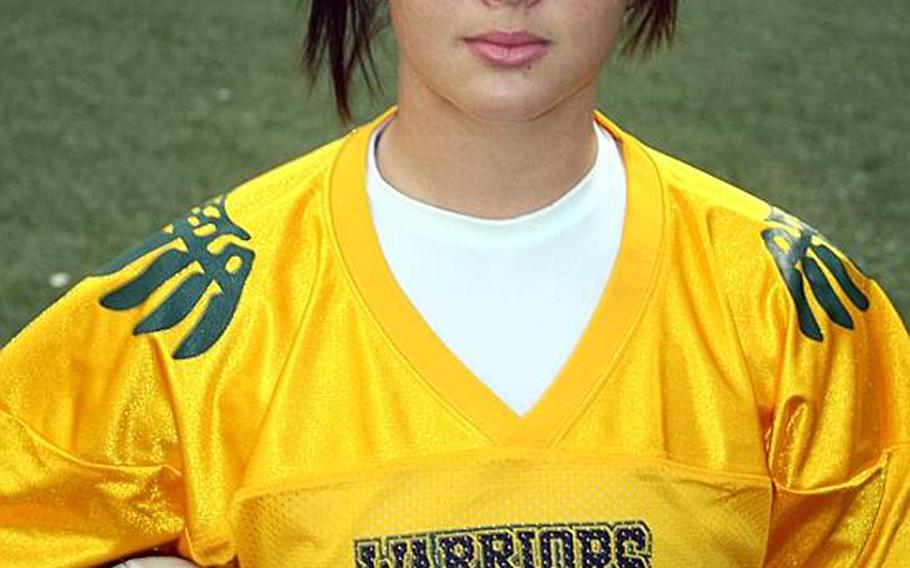 If Claiborne keeps kicking as she did in the Warriors&rsquo; 26-0 win Friday over Osan American, the football team just might beat Thompson to it &mdash; which would make Claiborne a rare girl to be so crowned in a predominantly boys sport.

&ldquo;She&rsquo;s the best kicker on the team,&rdquo; coach Ken Walter said of Claiborne, who hit two of three extra-point tries, just missed a field goal and squibbed three kickoffs recovered by Daegu to keep the ball out of Osan&rsquo;s hands.

Claiborne didn&rsquo;t play in Daegu&rsquo;s first three games, all defeats, but came out to practice the past couple of weeks and beat out three boys kickers, giving her the primary kicking spot, Walter said.

&ldquo;She&rsquo;s not playing around. She comes out every day, she&rsquo;s a good player and a tough competitor. We&rsquo;re glad to have her out there,&rdquo; he said.

And she&rsquo;s no gimmick, no feminist, no rebel trying to make an &ldquo;I&rsquo;m not just one of the boys&rdquo; statement. Player, teammates, coaches and opponents say she&rsquo;s there to play ball just as any other player would.

&ldquo;Other teams are going to look at her as a gimmick. If you ask Osan, she&rsquo;s not a gimmick,&rdquo; said Luke Spencer, Daegu&rsquo;s special teams and defensive coach.

He watched Claiborne last spring as she earned All-Tournament honors, notching two goals and 12 assists for a Daegu soccer team that went 17-6-2 and took fourth in last May&rsquo;s D-II tournament.

&ldquo;She has a level of competitiveness that we look for&rdquo; in football, said Spencer, who played at Cal-Davis and coached at Bamberg, Germany.

&ldquo;There&rsquo;s that &lsquo;it&rsquo; factor. She can kick like the rest of the kids, but there&rsquo;s a level of competitiveness unmatched by other kids. Some think of her as a girl trying to play a man&rsquo;s sport, culturally accepted norms that we usually embrace. I think of her as a football player.&rdquo;

She&rsquo;s not the first girl to suit up for Daegu; Claiborne follows in the footsteps of Joanne Youngblood, another soccer player who kicked for the Warriors in 2005.

Monica Holman became the first girl to score a touchdown in a Pacific high school football game for Zama American in 2003. Eight years before, Liz Dolan made seven extra-point kicks for Zama. Samantha Little played backup lineman for Yokota in 2006.

At 5-foot-9, 148 pounds, Claiborne initially resisted the idea of playing football, quitting after a day of spring practice.

But encouraged by her mother Stacey Bouler, a chief warrant officer 2 assigned to the 501st Sustainment Brigade at Camp Carroll, and recommended by Thompson to Walter, Claiborne finally put on the pads.

&ldquo;She has the God-given talent, so why not use it?&rdquo; Bouler said. &ldquo;Soccer has always been her passion, but she has found a new love.&rdquo;

Admittedly, soccer is her &ldquo;first love,&rdquo; Claiborne says. &ldquo;It was something different in my family, they all played basketball, softball, football, baseball &hellip; in soccer, you can make a goal from way far out. That opened my eyes and made me want to do that.&rdquo;

What attracted her to football, she said, was the game&rsquo;s aggressive nature. &ldquo;Some people like it to release anger. Others like it just to be rough,&rdquo; Claiborne said. &ldquo;I just wanted to give it a try.&rdquo;

How does she like it? Winning her first game, kicking the extra points and the pats on the helmet after that were &ldquo;pretty fun,&rdquo; she said.

How have her teammates accepted Claiborne?

&ldquo;Like we&rsquo;ve accepted everybody else,&rdquo; said senior lineman Daniel Saintil, who knew Claiborne when she was in fifth grade and he in seventh at Fort Lee, Va. &ldquo;She can get the one or three points when we need them. She just wants to play football. We&rsquo;re happy to have her.&rdquo;

&ldquo;She did a good job,&rdquo; said Osan coach Aaron Mundy, who coached future NFL quarterback Jay Cutler while at Heritage Hills (Ind.) High School. &ldquo;She put the ball where it needed to be, hit a couple of extra points. &hellip; She&rsquo;d be welcome here if she were here.&rdquo;

Some coaches of other girls sports might want her to shy away from the gridiron, but Thompson insists he&rsquo;s all for Claiborne doing it.

&ldquo;The structure is good for her and it&rsquo;s something she&rsquo;s good at,&rdquo; Thompson said. &ldquo;It&rsquo;s good for her to do that. She can hold her own. She&rsquo;s a fairly physical girl. It will keep her in shape and kicker is one of the most protected positions on the field.&rdquo;

This will be Claiborne&rsquo;s only season on the team; she will transfer in June to either Fort Riley, Kan., Fort Campbell, Ky., or Fort Stewart, Ga. Big schools are in each area with plenty of boy kickers; Claiborne says she&rsquo;s accepted that she might not play football in the States.

For the moment, she&rsquo;ll continue to chase the dream of the Warriors&rsquo; reaching their fourth D-II title game in five years, and perhaps become that first girl to wear a Far East D-II football title ring.

&ldquo;I&rsquo;ve thought about that. It would be kind of cool,&rdquo; she said.