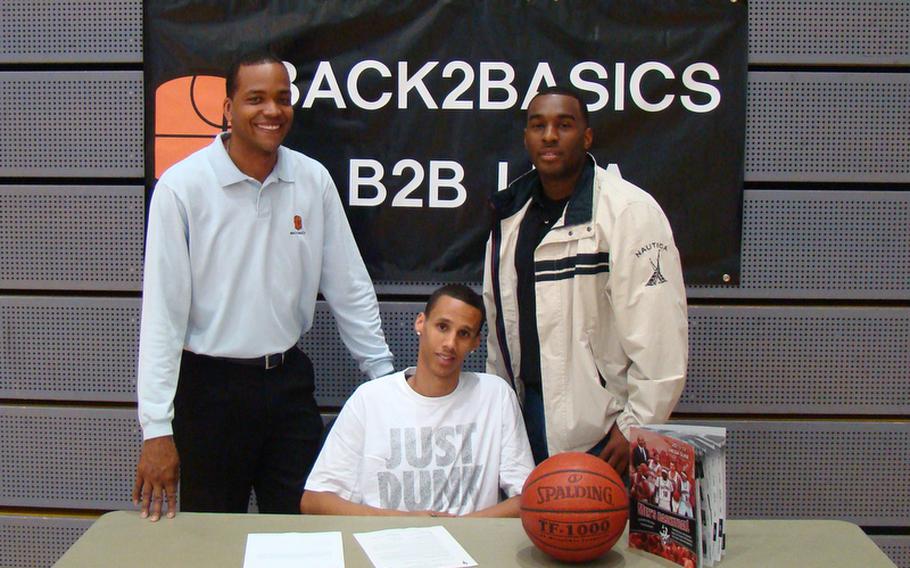 &ldquo;Back2Basics really helped me improve my game,&rdquo; Allen, a 6-foot-2-inch guard and two-time All-European, said by telephone last weekend while talking about his acceptance of a full-ride scholarship to play for the California University (Pa.) Vulcans of NCAA Division II. &ldquo;I started off a perimeter shooter. (B2B) Coach (Quantarius) Burns took me from there.&rdquo;

Back2Basics, formed in 2007, consists of some 60 volunteer coaches who work with American athletes in Germany in all sports, trying to prepare them athletically and academically for college, according to its founder and director, James McKee.

&ldquo;We&rsquo;re trying to get kids recruited directly from over here,&rdquo; McKee said by telephone, &ldquo;instead of having them have to ... go back to the States.&rdquo;

In Allen&rsquo;s case, the process worked exactly according to plan, his father, James, said.

&ldquo;We heard from no less than 60 coaches,&rdquo; James Allen said by telephone about the networking as well as coaching B2B provides.

B2B also has stateside volunteers. One of them, James Ingram of Sportz Highlights in San Antonio was instrumental in drawing attention, DeVonte&rsquo; Allen said.

&ldquo;Mr. Ingram walked around with my highlight video on his tablet (computer),&rdquo; Allen said. &ldquo;He showed it to coaches he meets.&rdquo;

B2B (www.back2basicsusa.com) provides competitive opportunities, too. McKee, who saw Allen perform in a pickup game at the Ramstein gym and suggested he join the program, annually takes teams to the World Sports Festival in Austria, giving them exposure to world-level competition.

Allen, who played on B2B&rsquo;s under-18 gold-medal team last summer, will be on this year&rsquo;s team, too, as it tries to defend its title July 5-8 in Perchtoldsdorf, Austria.

&ldquo;It was a great experience for me,&rdquo; Allen said of last year&rsquo;s tournament. &ldquo;It was really helpful to get to play against that level of competition.&rdquo;

It also helped Allen showcase the skills he learned from Burns.

&ldquo;(Coach Burns) taught me I had to use different moves going in, and that I had to use both hands because in college, they close down a one-handed player,&rdquo; Allen said. &ldquo;It really helps being able to use both hands. Now, I can finish well, going for the dunk or the easy lay-up on either side of the basket. I play good defense now, too, and I&rsquo;m better on the fast break.&rdquo;

The coaches at Pennsylvania&rsquo;s Cal U. noticed.

&ldquo;The catalyst for him being picked up is directly attributable to the Back2Basics director James McKee and James Ingram of Sportz Highlights. ...,&rdquo; James Allen wrote in an email. &ldquo;Coach Burns should be credited with taking DeVonte&rsquo;s skills to the next level.&rdquo;