Bitburg grounds out a victory over Aviano 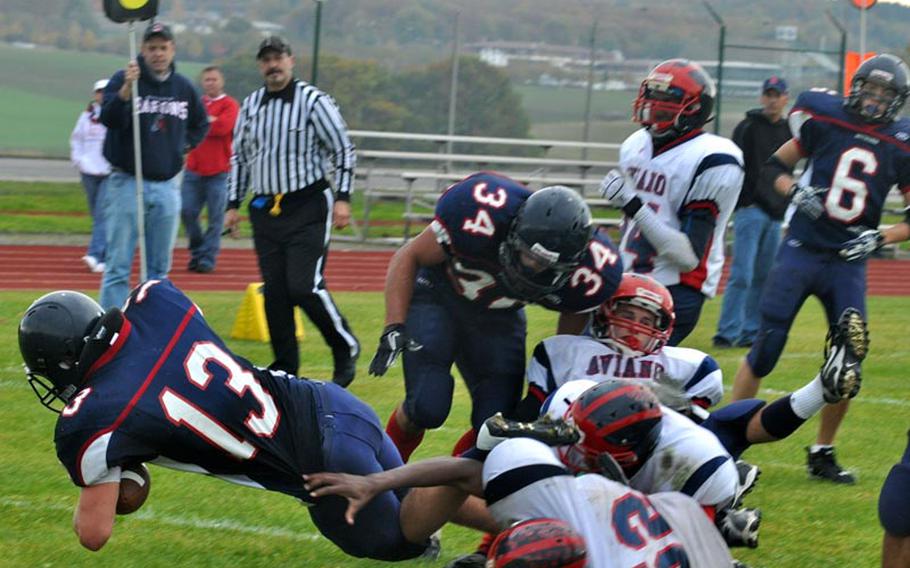 Bitburg junior Kyle Edgar dives for one of his three touchdowns in the Barons' defeat of the Aviano Saints, 50-21. (Seth Robbins/Stars and Stripes)

Bitburg junior Kyle Edgar dives for one of his three touchdowns in the Barons' defeat of the Aviano Saints, 50-21. (Seth Robbins/Stars and Stripes) 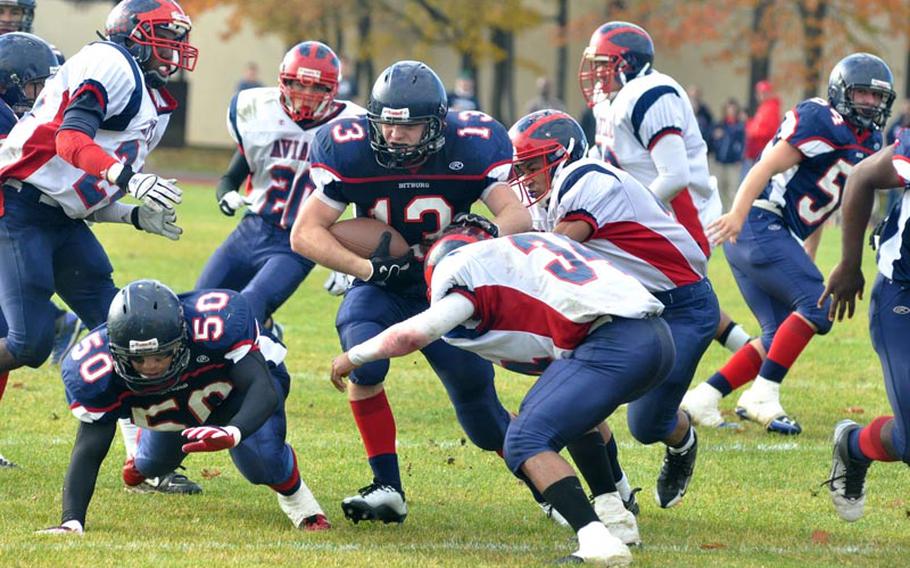 Bitburg's junior All-Europe running back Kyle Edgar led the Barons to a victory Saturday with 27 carries for 264 yards. (Seth Robbins/Stars and Stripes) 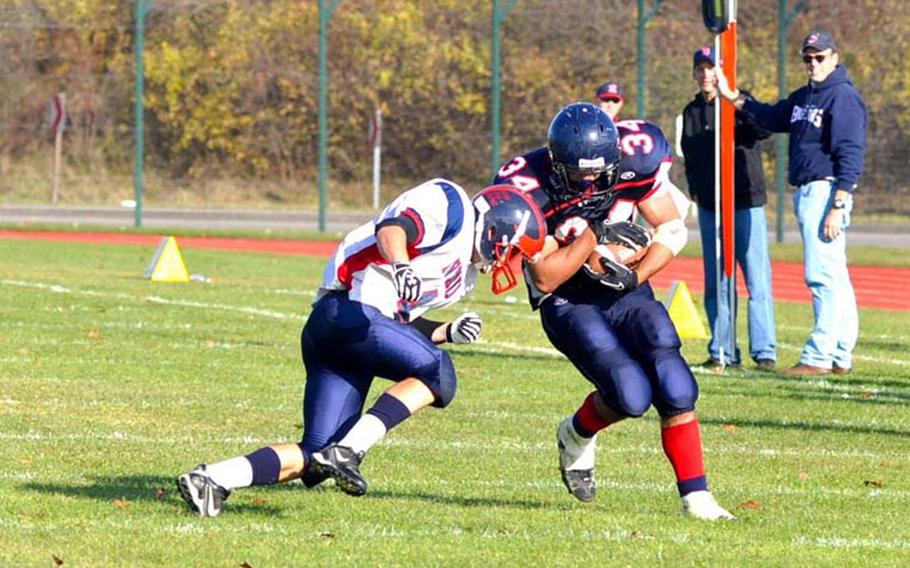 Senior Bitburg running back Austin Schmidt rumbled his way to 118 yards and two touchdowns in Bitburg's victory over Aviano. (Seth Robbins/Stars and Stripes) 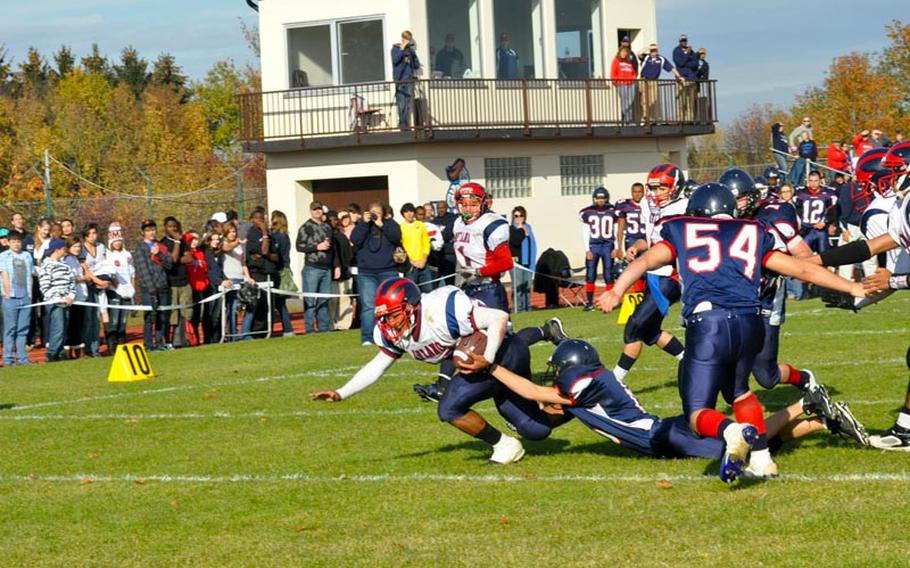 Senior Aviano running back Darien Cornett dives for a touchdown in the third quarter, bringing Aviano within 14 points of Bitburg at 28-14. (Seth Robbins/Stars and Stripes) 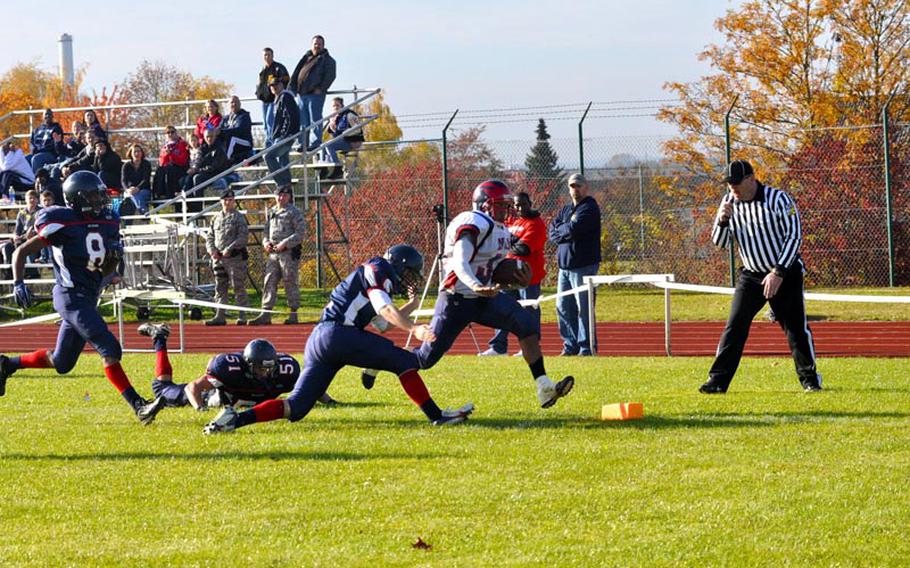 Aviano senior running back Darien Cornett toes the line as he races for the end zone. He would not make it but would later score on a 1-yard run. (Seth Robbins/Stars and Stripes)

BITBURG, Germany &mdash; The hard-hitting Bitburg Barons smashed their way to victory and a third straight Division II title game when they defeated the Aviano Saints 50-21 in a DODDS-Europe semifinal matchup Saturday.

The win gave the Barons, who have won the Division II football championship for the past two years running, sole possession of the fifth longest winning streak in DODDS-Europe history, at 21 straight games.

Leading the way Saturday was a strong running attack, for which the Saints had few answers. The Barons defense was also able to hold the high-flying offense of the Saints to only a few big plays.

&ldquo;They have a real potent offense,&rdquo; Bitburg coach Mike Laue said. &ldquo;I was real happy with our guys on defense for being able to stop them most of the day.&rdquo;

The Barons set the tone early when junior running back Kyle Edgar dashed past the entire Aviano defense for an 80-yard touchdown run on the first play of the game. But Aviano came right back, with sophomore wide receiver Jordan Bert catching a long pass for about 40 yards. Aviano quarterback Corey Webb then threw a 9-yard touchdown pass to senior Myron McRae.

The game looked to be a shootout, but the Barons then slowed the tempo by running the ball. Before the half, Bitburg&rsquo;s running attack scored on three drives, giving the Barons a 28-7 lead. Two of the scoring drives had 14 plays, allowing Bitburg to control the clock for much of the half. And late in the second quarter, Aviano was hurt by several costly penalties, one of which negated a touchdown pass.

In the third quarter, the Saints fought back, scoring on a 3-yard touchdown run by senior Darien Cornett, which brought them within 14 points. But the running game of the Barons proved to be too strong in the fourth quarter.

Senior running back Austin Schmidt punched the ball into the end zone on two consecutive drives, giving the Barons a 42-14 lead. Aviano scored one more time, but Bitburg quarterback Corey Beshon led the team back down the field on a seven-play drive and scored on a 1-yard quarterback sneak.

&ldquo;It was quite a challenge,&rdquo; Edgar said. &ldquo;But we just played Bitburg football.&rdquo;

Edgar, Bitburg&rsquo;s All-Europe running back, led the team in rushing with 27 carries for 264 yards, and he also scored three touchdowns. Behind him was Schmidt with 20 carries for 118 yards and two touchdowns. Beshon also had two running touchdowns.

&ldquo;We were able to go down the field on offense, and that is what kept us rolling,&rdquo; Laue said.

Leading the defense was senior Matt Flood with eight tackles, and junior Bryce Randall swarmed to the football with four tackles for losses that totaled 33 yards. Senior John &ldquo;LJ&rdquo; Downey had one interception and four tackles.

After the win, Laue was already looking ahead to the championship game when he spoke to his team.

&ldquo;The one we&rsquo;ve been looking for all year long comes next Saturday,&rdquo; he said. &ldquo;And it&rsquo;s always nicer to end the year with a win.&rdquo;