Would Japan have surrendered without the atomic bombings? 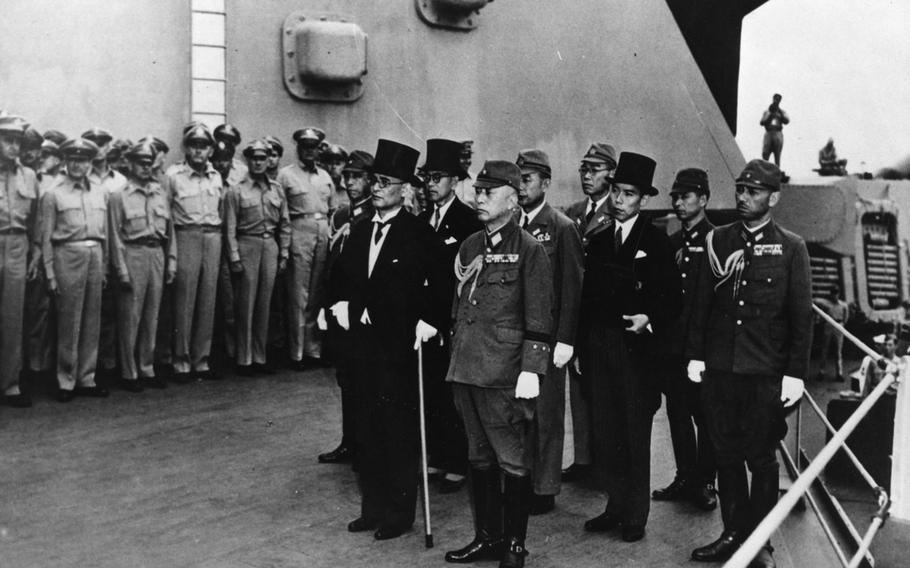 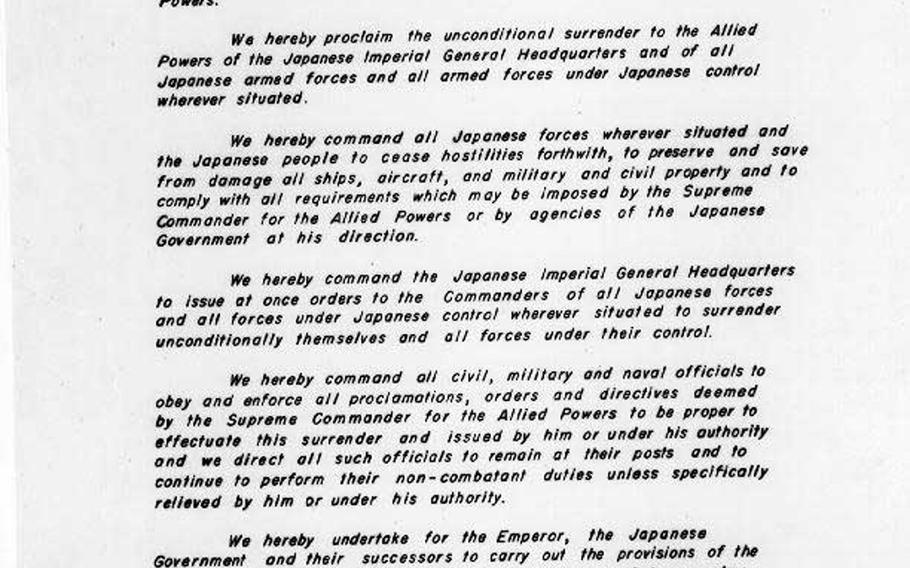 On Sept. 2, 1945, the Japanese representatives signed the official Instrument of Surrender, prepared by the War Department and approved by President Harry S. Truman. (Courtesy of U.S. National Archives) 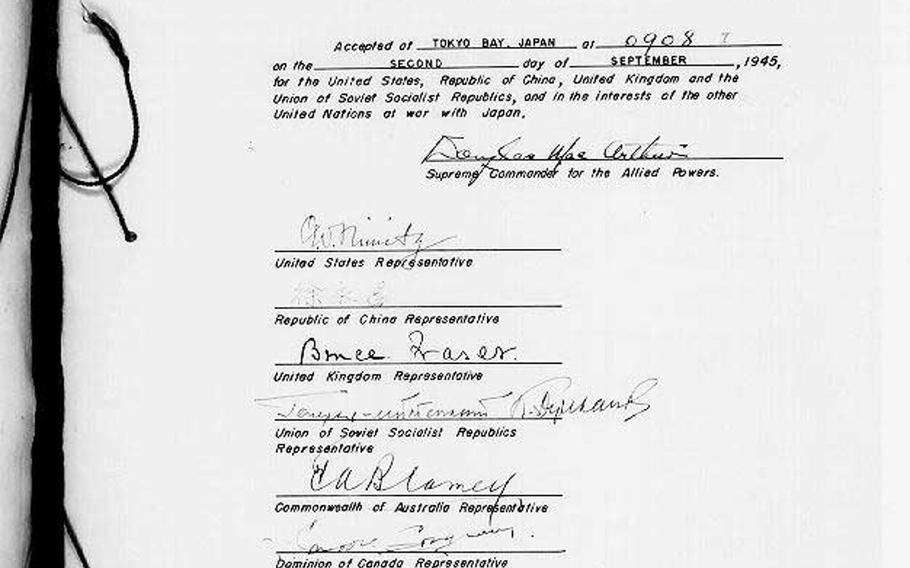 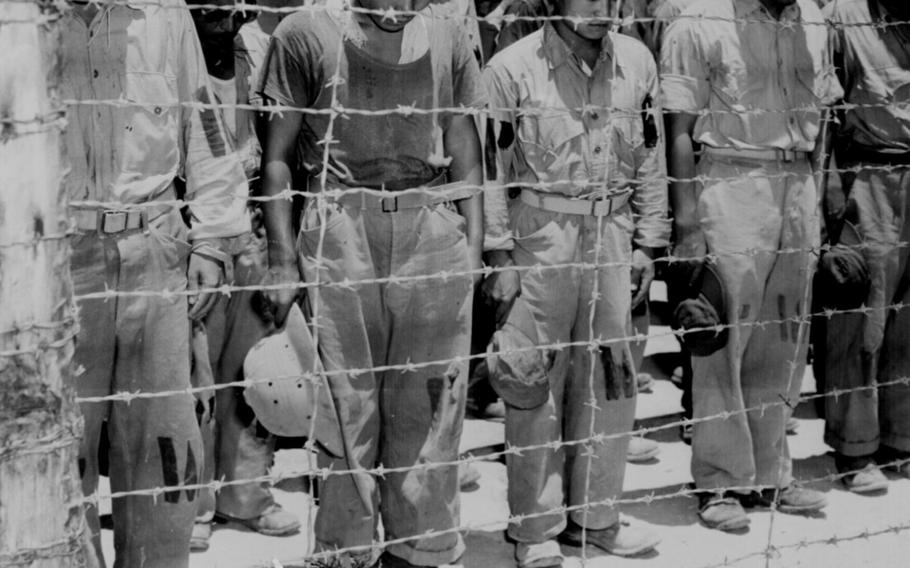 Japanese prisoners of war in Guam bow their heads on Aug. 15, 1945, after hearing that Emperor Hirohito has agreed to Japan's unconditional surrender. (Courtesy of U.S. National Archives) 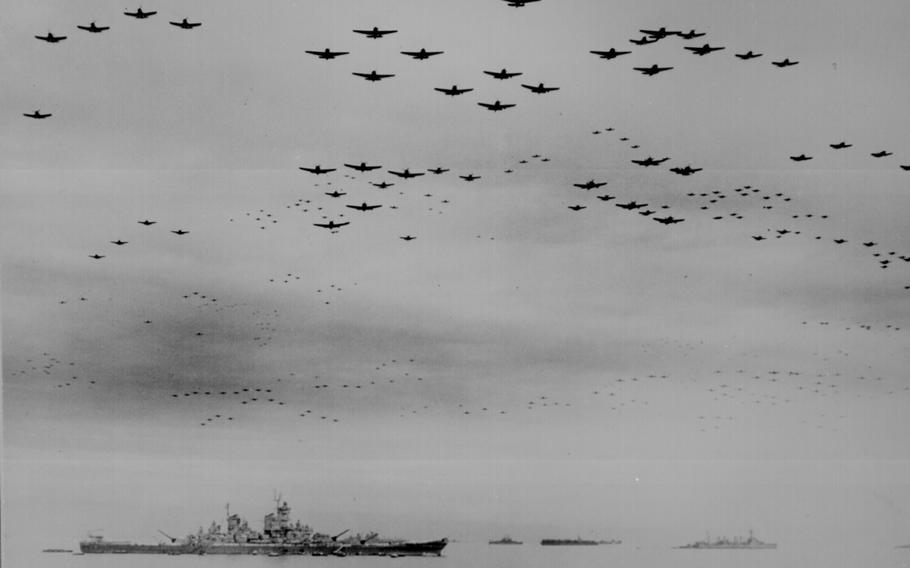 American F-4s and British F-6s fly in formation during surrender ceremonies above the USS Missouri in Tokyo Bay, Japan, on Sept. 2, 1945. (Courtesy of U.S. National Archives) 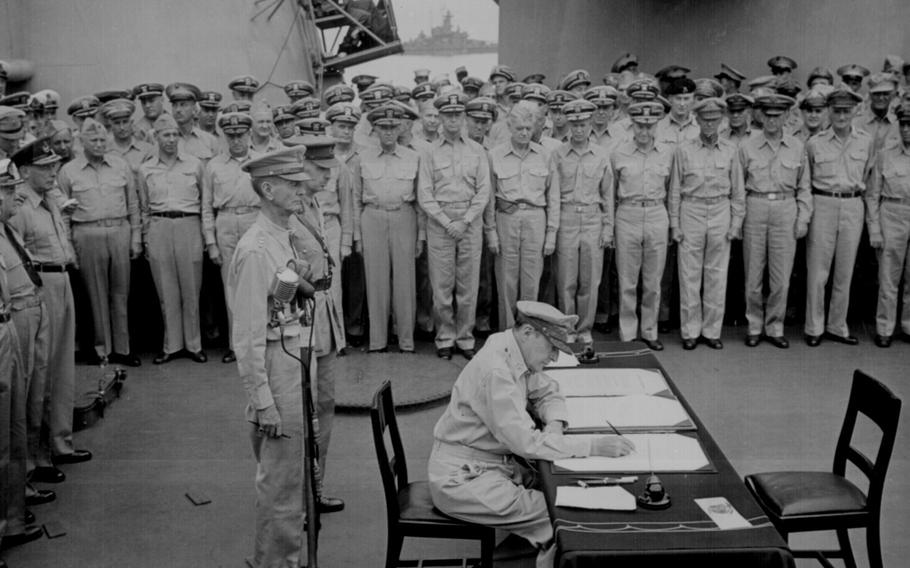 In the summer of 1945, Japan’s war leaders knew they were not going to win World War II.

Opposing camps of historians generally agree on that, but little else when it comes to debating Japan’s willingness to surrender.

In the United States, generations were taught that Japan would never have surrendered so quickly without use of the atomic bomb and that victory would have required a bloody invasion of the Japanese mainland, costing hundreds of thousands of lives.

Japanese students were generally taught a very different narrative: that Japan already had been defeated and dropping the bombs on Hiroshima and Nagasaki three days apart was a geopolitical calculation to keep the Soviet Union at bay.

By the 1970s, multiple American scholars adopted the dominant Japanese point of view, arguing that the atomic bomb was unnecessary because the Japanese would have surrendered by the end of 1945.

The “revisionist” claims came under fire from the “orthodoxy” camp, which pointed to Japan’s famed unwillingness to surrender, its massed anti-invasion divisions and notes from some U.S. officials who supported Soviet help against Japan.

Somewhere between the opposing contentions lies the work of Tsuyoshi Hasegawa, author of the 2005 book, “Racing the Enemy: Stalin, Truman and the Surrender of Japan.”

Hasegawa brings a unique perspective: he is a professor at the University of California-Santa Barbara who speaks Russian and lived through the U.S. firebombing of Tokyo as a child.

“True defeat and surrender are two different things,” Hasegawa said in a phone interview with Stars and Stripes. “Surrender is a political decision, requiring political will.”

However, the Soviet Union’s entry into the war, and the realization that Japanese forces would have to fight the Soviets in the north and the U.S. in the south, constituted “the greater shock,” Hasegawa said.

There were two broad camps among Japan’s war leadership in August 1945, according to Hasegawa’s research.

The war camp maintained that Japan must inflict tremendous damage on the Americans in order to win better terms than the “unconditional surrender” offered by President Franklin Roosevelt at the Yalta Conference in 1945.

The peace camp contended that ending the war as soon as possible was the best way to achieve both camps’ overriding goal: retaining the emperor system.

In 1945, the emperor’s fate remained an open question for U.S. policymakers.

Senior officials like Joseph Grew, former U.S. ambassador to Japan, and War Secretary Henry Stimson argued for retention of the emperor in some capacity. High-ranking officials like Dean Acheson and Archibald MacLeish said the emperor must go, according to declassified U.S. government documents.

Japan’s war camp believed that the Soviet Union would eventually help broker a peace deal. Even after Stalin ended a neutrality pact with Japan in April 1945 and began massing troops toward Japanese-held territory, Japanese leaders held fast to this fantasy, Hasegawa said.

“From the Soviet Union’s point of view, it was important to postpone [Japan’s] surrender until they were ready to enter the war,” Hasegawa said.

By that time, Japan had few remaining cities with a population of more than 100,000 that hadn’t been severely damaged. Gen. Curtis LeMay burned much of Tokyo with incendiary bombs months earlier, a move he later admitted would have been considered a war crime if the U.S. had lost.

Hiroshima was the latest bombing victim, albeit with a terrifying new weapon. However, Japanese forces still retained several divisions in Kyushu that prepared for an American invasion.

“The highest decision-making body was not even convened after Hiroshima,” Hasegawa said. “The cabinet was divided. The atomic bomb was effective enough that for the first time, cabinet decision-makers decided to really terminate the war. But on what conditions, they were totally divided.”

Japan’s leadership quickly sent a telegram to their ambassador in Moscow, hoping to appeal to Stalin for help.

Instead of offering aid, on Aug. 8, Soviet Foreign Minister Vyacheslav Molotov read to Japan’s ambassador a declaration of war.

The Soviets invaded Japan-held Manchuria on Aug. 9. The same day, the United States dropped an atomic bomb on Nagasaki.

Even after the bombs and the Soviet invasion, some of Japan’s hawks weren’t ready to stop fighting, according to some historians.

Gen. Korechika Anami, Japan’s minister of war, called for conditions that the world wouldn’t have recognized as surrender.

Anami wanted retention of the emperor, self-disarmament, no foreign occupation, and trial of any Japanese war criminals by Japan itself, according to “The Rising Sun,” John Toland’s 1971 Pulitzer Prize-winning history of Japan’s war empire.

Emperor Hirohito, who had thus far stayed above the fray, put the debate over prolonging the war to an end when he called for a surrender.

Diehard Japanese hawks attempted a palace coup to save the emperor’s “right to rule,” but the military quashed it. The emperor had spoken and the military would obey.

Hasegawa contends that Hirohito’s decision to surrender was entirely pragmatic.

“He didn’t do that because he was really concerned about the fate of the Japanese people,” Hasegawa said. “He didn’t surrender after the firebombing [of Tokyo]. The crucial point was that he just wanted to preserve the emperor system as head of the Shinto religion.”

The Soviets continued fighting in the north through September, capturing territories and islands at Japan’s fringes. But the United States closed in quickly and occupied Japan’s main islands. There would be no German-style partition.

Historians would later argue that this had been America’s goal all along. However, declassified archives show a great deal of disagreement among U.S. officials over Soviet involvement in Japan.

Michael Kort, professor of social science at Boston University, contends U.S. President Harry S. Truman simply wanted the war over and viewed Soviet involvement as another way to achieve that.

“The documentary evidence is overwhelming that Truman wanted the Soviets to enter the war and that on Aug. 8, he was very pleased to learn that they had done so,” Kort said.

As for the use of atomic bombs, opinion remains divided. A Pew Research Center poll released in April showed that 56 percent of Americans believe it was justified. Among Japanese, 79 percent said it was not.

Hasegawa lays the blame for the tragic atomic bombing and the Soviet invasion at the feet of Japan’s wartime government. However, his research ultimately changed his thinking on some aspects.

The bomb played a part in Japan’s surrender, but it may not have been necessary, he said.

Had the U.S. drawn Stalin into publicly supporting the Potsdam Declaration’s unconditional surrender demand, Japan might not have held out hope for a Soviet-brokered deal. Had it guaranteed the emperor’s position, Japan might have surrendered earlier, Hasegawa said, though this is yet another point that draws endless historical debate.

“Other alternatives were available, but they were not explored,” Hasegawa said.

Stars and Stripes researchers Norio Muroi and Catharine Giordano contributed to this report.