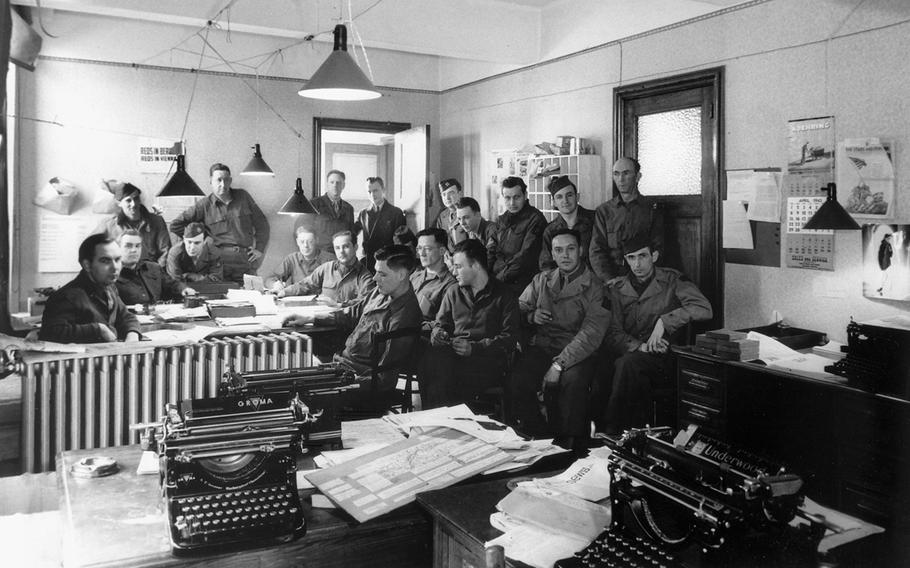 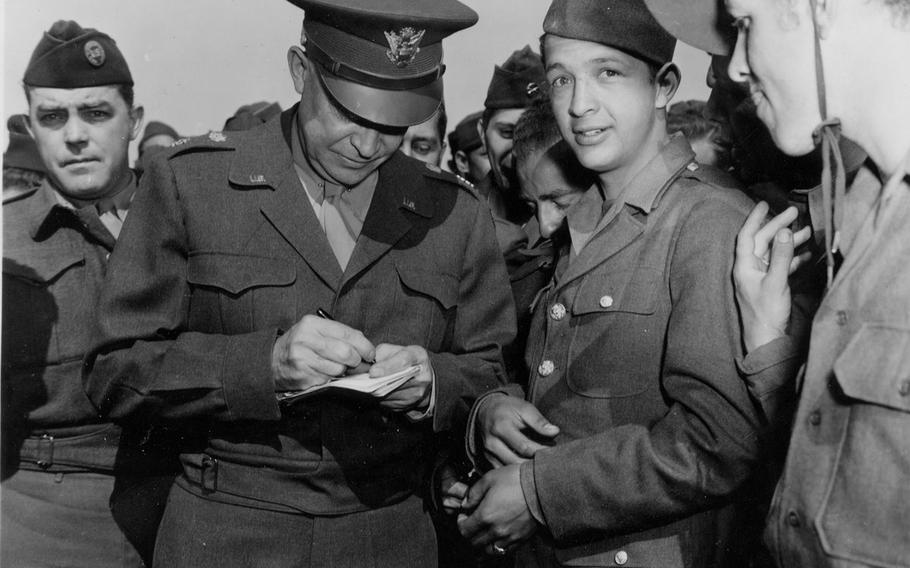 Staff Sgt. Charles Kiley, left, was assigned by his Stars and Stripes editors to cover General Dwight d. Eisenhower near the end of World War II. In this April 1945 photo, Eisenhower meets repatriated Allied prisoners of war in France. Courtesy of U.S. Army (Special to Star and Stripes) 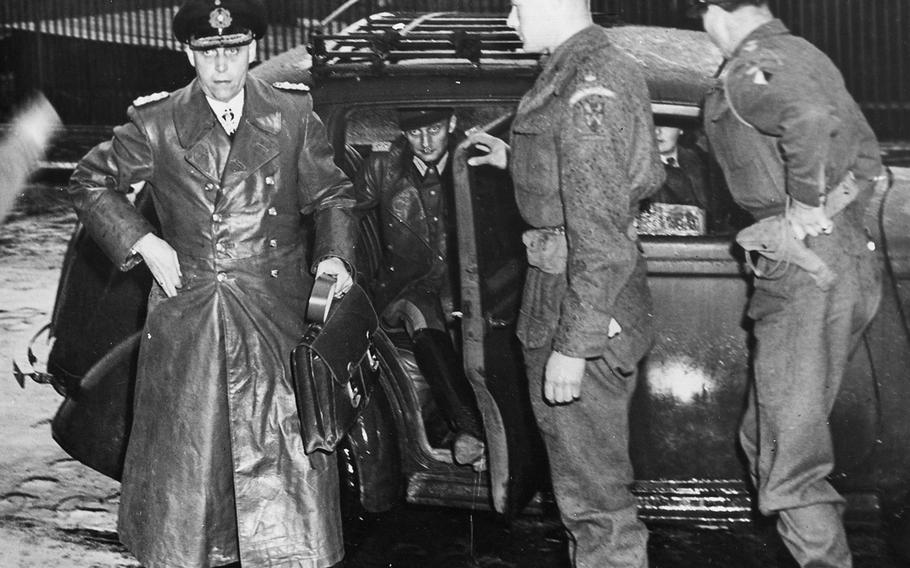 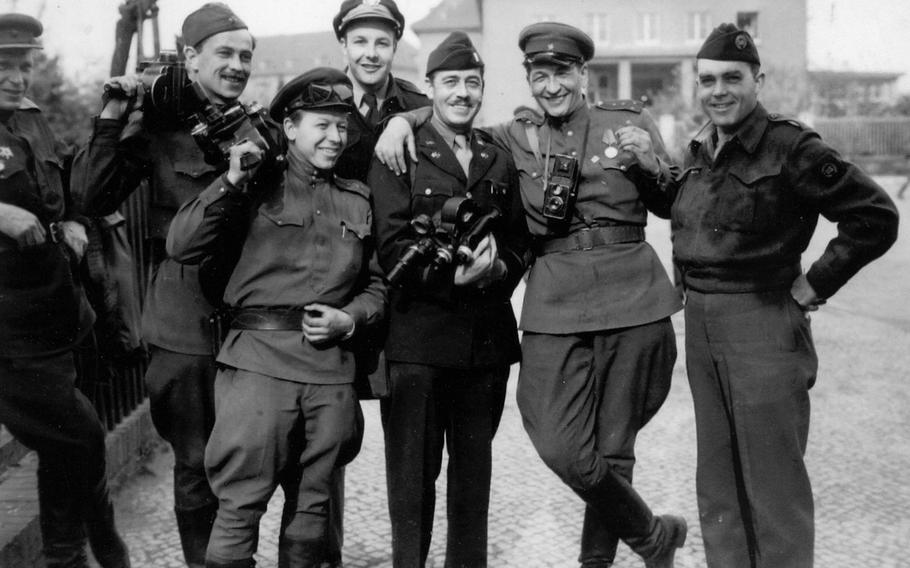 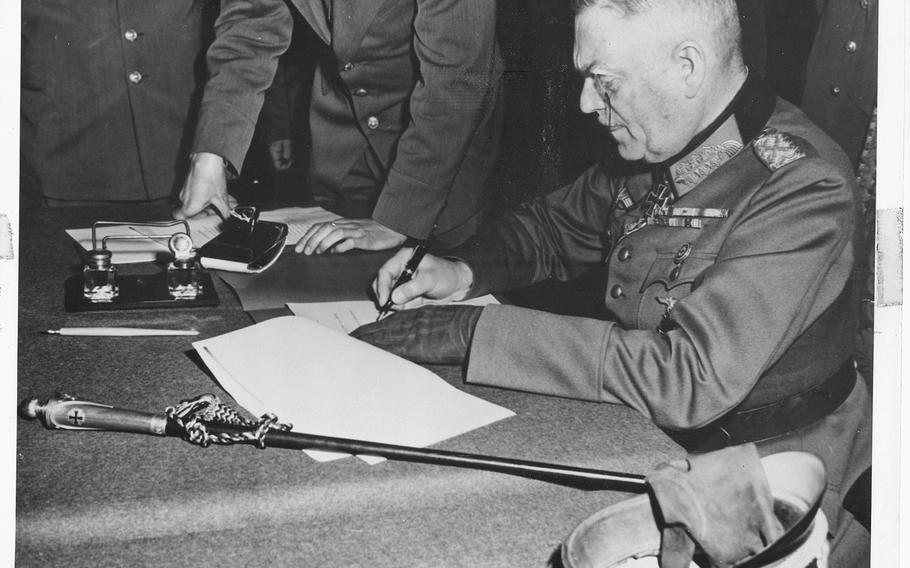 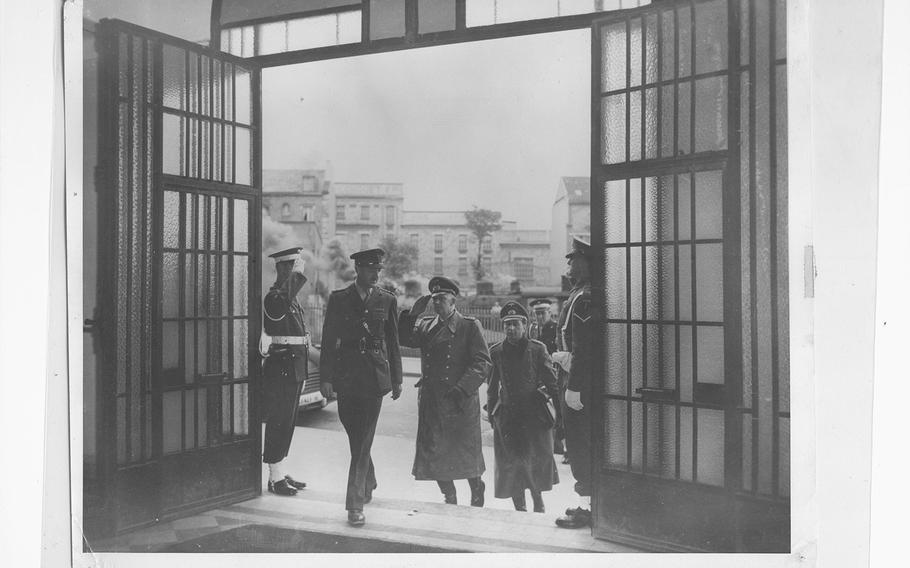 Gen. Alfred Jodl, chief of operations for the German army, arrives in Reims, France, in May 1945, to negotiate Germany's surrender to the Allies to end World War II. (Photo courtesy of Kiley family) 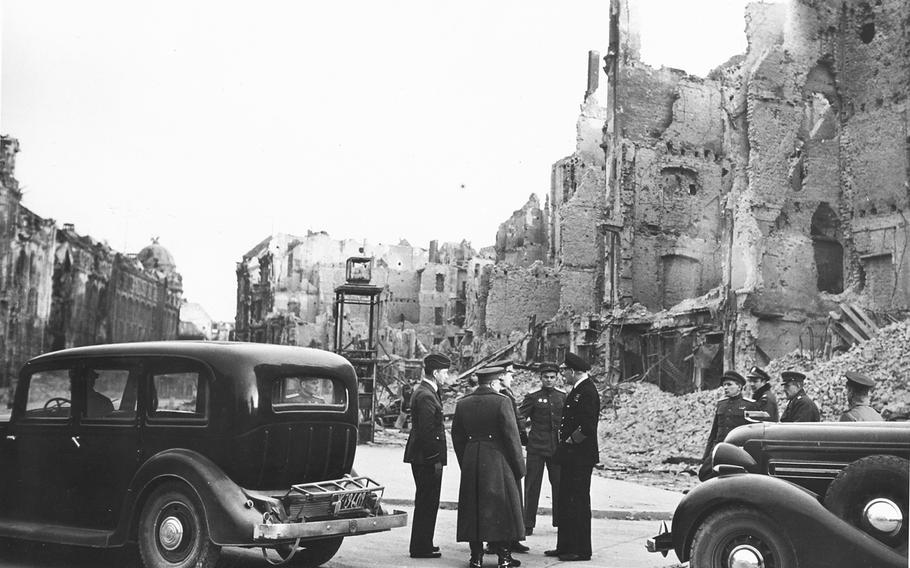 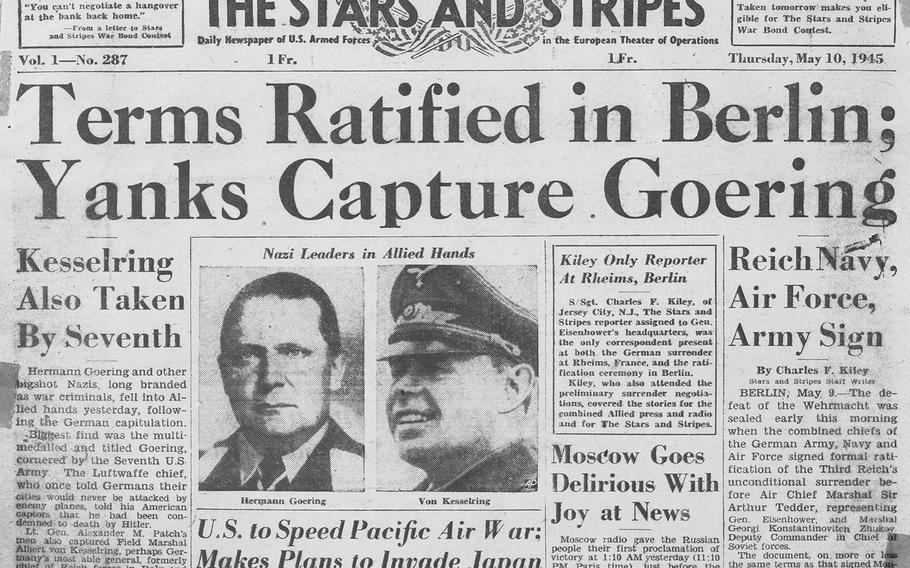 At 3 a.m. on April 30, 1945, my father, Charles Kiley, had to check out a remarkable story—The Associated Press was reporting that the Germans had surrendered to the Allies.

The war in Europe was over. Or was it?

A staff sergeant reporting for Stars and Stripes, my father was assigned to cover Gen. Dwight D. Eisenhower’s moves in the waning days of the war in Europe.

On this night — a week before the eventual surrender of German forces — the AP report had been filed from San Francisco where a peace conference was taking place. Eisenhower, the Allied commander, was in a castle just outside Reims, France, and few miles from my father’s billet and Supreme Headquarters Allied Expeditionary Forces headquarters. Following a bumpy and tense Jeep ride from Reims to Eisenhower’s quarters, my father’s news of the surrender left the general “bemused,” he would later say.

Eisenhower casually offered my father a cigarette while one of his aides called British Prime Minister Winston Churchill in London.

The general remarked that it “would be an ironic climax to this war if it was over, and I didn’t know about it,” my father wrote in a letter to my mother that morning.

Though the rumor turned out to be false, it was the start of a historic week that would my father would remember for the rest of his life.

When the Stars and Stripes reporter assigned to Eisenhower, Jules Grad, got rotated home, my father was tapped by editors to “stick to the general” until the end.

Before the war, my father had been a sports reporter and editor at the Jersey Journal in Jersey City, N.J. In late 1941, he answered the call to the U.S. Army, doing basic training at Camp Croft, S.C., with the 26th Infantry Battalion, and he was on a troop ship to Northern Ireland by April 1942.

He filed stories to the Stars and Stripes about visiting entertainers—Al Jolson, Martha Raye, etc.

When the paper went from weekly to daily, he was transferred out of combat duty to London where he met up with Andy Rooney, with whom he would be lifelong friends.

The Germans might not have quit on April 30, but V-E Day was certainly imminent that first week of May.

German divisions were surrendering across Europe. Allied units were liberating concentration camps. German-run radio stations were reporting that the Wehrmacht was smashed.

On May 4, Adm. Karl Doenitz, Hitler’s successor as fuehrer, authorized the signing of a cease-fire with British Field Marshal Bernard Montgomery in Germany. A day later, Germany surrendered forces in Holland, and Denmark. On May 6, forces surrendered to the Red Army in Breslau, Germany, near Berlin. Gen. Alfred Jodl, chief of operations for the German army, then flew to Reims to join Adm. Hans-Georg von Friedeburg, commander of the German navy, to negotiate specifics for total surrender.

Eisenhower personally tapped my father to be designated pool reporter for negotiations.

No other reporters were in the schoolhouse headquarters of SHAEF while the two sides met. His notes would be shared with the world press at the eventual signing ceremony.

His job included capturing the details and movements of the key players — what they ate, wore, their demeanor. The rooms of SHAEF were constantly filled with clouds of cigarette and cigar smoke, and the aroma of strong coffee hung thick everywhere. The Germans were wrung out and would nod off if they stopped for more than a minute or two, he noted, operating on snatches of shallow sleep for more than a week.

Jodl’s historic words: “In this war, which has lasted more than five years, both [sides] have achieved and suffered more than perhaps any other people in the world. In this hour I can only express the hope that the victor will treat them with generosity.”

My father noted that Jodl broke halfway through his address, and appeared on the verge of tears. His hands were trembling when he finished.

In the end, 17 reporters and photographers were flown in from Paris to witness the actual signing. On the way, they were required to sign an embargo prohibiting release of the story until cleared by SHAEF so that a coordinated announcement among the U.S. Brits and Soviets could take place.

In an act of defiance, AP reporter Edward Kennedy broke the embargo. In another letter to my mother, my father said that he knew it would be “damn difficult” for the embargo to hold.

On May 8, the huge type on Stars and Stripes’ front page screamed, “GERMANY QUITS.”

My father’s bylined story on May 9 was headlined, “This Is How Germany Gave Up.” Even though he was there for everything, he had to write the story referring to the AP story. Stars and Stripes, under the control of the Defense Department, was obliged to honor the embargo no matter who else broke it.

The war was costly for my father.

After the war, my father rejoined his bride whom he had met while at Camp Croft and wed in August 1944. He and my mother raised six children.

After the war, he worked some 20 years for The New York Herald Tribune as a reporter, and then editor. After the paper folded in 1966, he went on to be editor-in-chief of The New York Law Journal for 20 years until he retired at age 76.

Known by his Stars and Stripes colleagues for always looking for a Catholic Mass wherever he was stationed during the war, he also became an ordained permanent deacon in the Roman Catholic church. He died in 2001, at home, at the age of 87.

David Kiley is a journalist and author. He has co-authored a book with Anne Kiley and Thomas Pellechia, titled “Writing The War: Chronicles of a World War Two Correspondent,” which will be released by Prometheus Books this fall.